Zeitgenoessische italienische Kunst. A selection of over 100 works from the Schaufler collection: an overview of over 60 years of Italian art which is thorough in its diversity. More than 30 artists are presented, they join in a dialogue with works by European and American contemporaries. 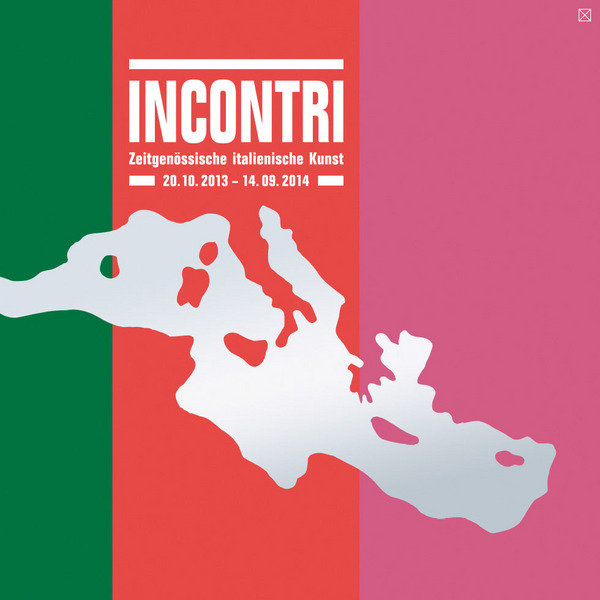 The three main currents that have shaped in the image of contemporary art from Italy in recent decades – Arte povera, ZERO, and Transavanguardia – have repeatedly been appreciated in exhibitions. But surveys of the whole of Italian contemporary art are still rare. The Schaufler Collection includes not only famous names but many artists who are scarcely a presence outside Italy. The exhibition Incontri thus illustrates the breadth of contemporary Italian art, locates it in the international context and clarifies its relevance.

Incontri (Italian for "encounters) both juxtaposes works by artists who are known to have met and visualizes theoretical or fictional crossings of paths. Documenta in Kassel and the Venice Biennale play a fundamental role in artistic exchange even today. Moreover, since the late 1960s various internationally active art dealers have established a functioning network of young artists from Italy, the rest of Europe, and the United States.

Several highlights make Incontri a very special exhibition experience: Seven works by Michelangelo Pistoletto, one of the main exponents of Arte Povera, illustrate his development from the early 1960s to the present. One high point is his "Love Difference Table, 2002–2013", a loan from the project group Love Difference, which the artist founded in his native city, Biella. He received the Golden Lion at the Venice Biennale for this project in 2003.

Several works by Ettore Spalletti are also being shown, of which "Nostalgia, Roma" of 2009, which consists of five columns, is particularly impressive. Unusual objects such as two house doors designed by Enrico Castellani and Lucio Fontana, respectively in 1967, round out the exhibition.