On the occasion of this two-person dialogue Mohssin Harraki already created a video and interviewed Joseph Kosuth for his show Some videodialogues, and Kosuth utilizes the English etymology of the word 'light' as a connective structure for a new installation. 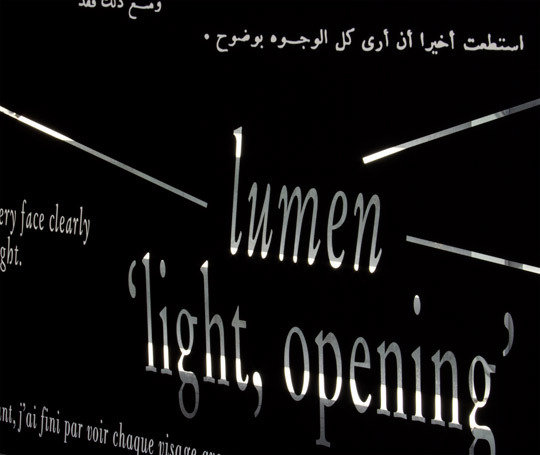 Imane Farès is delighted to present the forthcoming exhibition absence-presence, twice with the artists Mohssin Harraki (b. 1981; Asilah, Morroco) and Joseph Kosuth (b. 1945; Toledo, Ohio, USA). They have known each other for several years. Mohssin Harraki already created a video and interviewed Joseph Kosuth for his show Some videodialogues with other artists at the Lavomatic studio Seamus Farrell in Saint-Ouen in 2010. However, it's the very first time that they will exhibit together. The title of the exhibition absence-presence, twice refers to the relation between physical absence and mental space that both artists explore in a challenging dialogue.

Mohssin Harraki creates drawings, videos, installations, photography and performances in which he addresses cultural, political and historical themes such as the genealogy and the transmission of power, the formation of the collective conscience and memory. The artist proceeds by creating a dialogue with his peers, with artists or with people he meets in the streets.

Joseph Kosuth is one of the pioneers of conceptual and installation art, initiating language-based works and appropriation strategies in the 1960s.

On the occasion of this two-person dialogue with Mohssin Harraki, Joseph Kosuth utilizes the English etymology of the word 'light' as a connective structure for a new installation comprised of individual works, putting in play fragments from Albert Camus' 1942 book L'Étranger (variously translated The Stranger or The Outsider in English) in French, Arabic, and English.

About the gallery
Founded in 2010, Galerie Imane Farès presents an interesting mix of challenging young upcoming and more established contemporary artists from the Middle East and Africa.