Cats and Girls-Paintings and Provocations. Balthus is best known for his series of pensive adolescents who dream or read. The exhibition is limited to approximately 35 paintings dating from the mid-1930s to the 1950s. Never before shown in public there is a series of 40 small ink drawings. 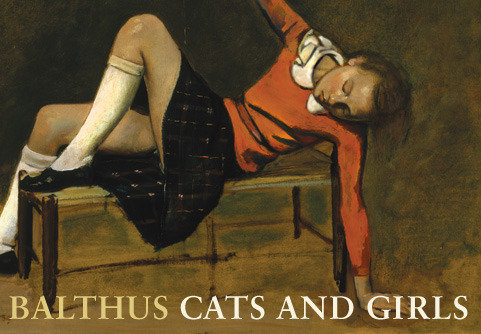 Balthus: Cats and Girls—Paintings and Provocations explores the origins and permutations of the French artist’s focus on felines and the dark side of childhood. Balthus’s lifelong fascination with adolescence resulted in his most iconic works: girls on the threshold of puberty, hovering between innocence and knowledge. In these pictures, Balthus mingles intuition into his young sitters’ psyches with an erotic undercurrent and forbidding austerity, making them some of the most powerful depictions of childhood and adolescence committed to canvas. Often included in these scenes are enigmatic cats, possible stand-ins for the artist himself. The exhibition at The Metropolitan Museum of Art is organized chronologically and focuses on the early decades of the artist’s career, from the mid-1930s to the 1950s, and features 34 paintings, as well as 40 ink drawings for the book Mitsou that were created in 1919, when Balthus was 11 years old—thought to be lost, these drawings have never before been on public display.

Balthus (Balthasar Klossowski, 1908-2001) and his elder brother, Pierre (1905-2001), were born in Paris into an artistic and intellectual milieu. Their father, Erich Klossowski (1875–1946), was an art historian and painter whose family had escaped from Poland in 1830 during an unsuccessful revolt against Russia and who obtained German citizenship in East Prussia. The boys’ mother, Elisabeth Dorothea Klossowska (1886–1969), was also a painter and was known as Baladine.

As an eight-year-old, in 1916, Balthus had posed with his pet cat for a watercolor by his mother. Three years later he worked his adventures with a stray cat he called Mitsou into 40 pen-and-ink drawings. The German poet Rainer Maria Rilke, a family friend—who not long after became Baladine’s lover—was so enchanted by these drawings that he arranged for them to be published in 1921 in the book Mitsou, for which he provided a preface in French. At Erich Klossowski’s request, the cover of the book gave the young artist’s name as “Baltusz,” as he then spelled his nickname—which was a shortened version of his given name, Balthasar. At Rilke’s suggestion, Balthus signed his work from then on with this childhood nickname, at some point changing the spelling to “Balthus,” as we know it today. Rilke played an important role in Balthus’s life, as a crucial creative influence and also as a surrogate father following Baladine and Erich’s separation.

Cats remained a force and presence in the artist’s work and life beyond his Mitsou drawings. In 1935, when Balthus was 27 years old, he painted his self-portrait The King of Cats. In it, he stands with his right hand on his hip, his left hand gripping his lapel, as a tiger cat rubs its head against his right knee. Later in his career, in the large decorative panel The Cat of La Méditerranée (1949), the artist includes a self-portrait of himself as a happy cat on whose plate a rainbow of fish lands.

Between 1936 and 1939, Balthus painted the celebrated series of 10 portraits of Thérèse Blanchard (1925-1950), his young neighbor in Paris. They are regarded as his most perceptive and sensitive portrayals of a young sitter and are among his finest works. At this point in Balthus’s career, the artist was chafing under the burden of portrait commissions, which he resented. So his neighbor’s youth must have been a welcome respite. But then, Balthus always felt a kinship with children; even as a child himself, he had been conscious of childhood’s importance. The portraits of Thérèse show her reading or daydreaming, posing alone, with her cat, or with her brother Hubert. In his first portrait of Thérèse of 1936, the artist used the same palette for the 11-year-old as for his portrait commissions: dark brown, ocher, and black, with a flash of red in the piping on her collar. But the mood is certainly very different from that of the adult portraits.

Thérèse became the inspiration of the leitmotif in his oeuvre until the years toward the end of his life, as the artist found other models and muses. In Balthus’s work, all of the girls who play with cats peer into mirrors, read, daydream, or appear completely self-absorbed. Their ostensibly unself-conscious postures sometimes suggest sensuality and languor, sometimes ungainliness—a contradiction that is perfectly in keeping with the phenomenon of puberty. Balthus rendered his young models with as much dignity and importance as someone their own age would have perceived them. The exhibition traces Balthus’s progression and the evolution of his chosen subject matter, ending with The Moth in 1959, the artist’s only night scene.

Balthus: Cats and Girls—Paintings and Provocations is organized by Sabine Rewald, the Jacques and Natasha Gelman Curator for Modern Art in the Department of Modern and Contemporary Art at The Metropolitan Museum of Art. The last exhibition on Balthus’s work in the U.S. was held in 1984 at the Metropolitan Museum.

The exhibition is accompanied by a fully illustrated catalogue published by The Metropolitan Museum of Art and distributed by Yale University Press, and is for sale in the Museum’s book shops (hardcover $45).
The catalogue is made possible in part by The Andrew W. Mellon Foundation.

Education programs include a series of exhibition tours, a lecture entitled "The Moody and Willful Adolescent Models of Balthus" on November 15, and a "Studio Workshop—Painting: Exploring Figure and Ground" to be held on November 10, 17, and 24.

The exhibition is made possible by the Eugene V. and Clare E. Thaw Charitable Trust, the Pierre and Tana Matisse Foundation, and Diane Carol Brandt.

The Metropolitan Museum of Art
1000 Fifth Avenue (at 82nd Street) - New York, NY 10028
Open 7 Days a Week
Sunday–Thursday: 10:00 a.m.–5:30 p.m.*
Friday and Saturday: 10:00 a.m.–9:00 p.m.*
Closed Thanksgiving Day, December 25, January 1, and the first Monday in May
Saturday evenings are made possible by the William H. Kearns Foundation.
*Galleries are cleared fifteen minutes before closing.
Admission
Fee includes same-day admission to the Main Building and The Cloisters museum and gardens. There is no extra charge for entrance to exhibitions.
Recommended
Adults $25
Seniors (65 and older) $17
Students $12*
Members (Join Now) Free
Children under 12 (accompanied by an adult) Free