On Paper. Drawing on the conventions and rhetoric of mass media imagery, Burgin began to produce allegorical works with photographs and text. 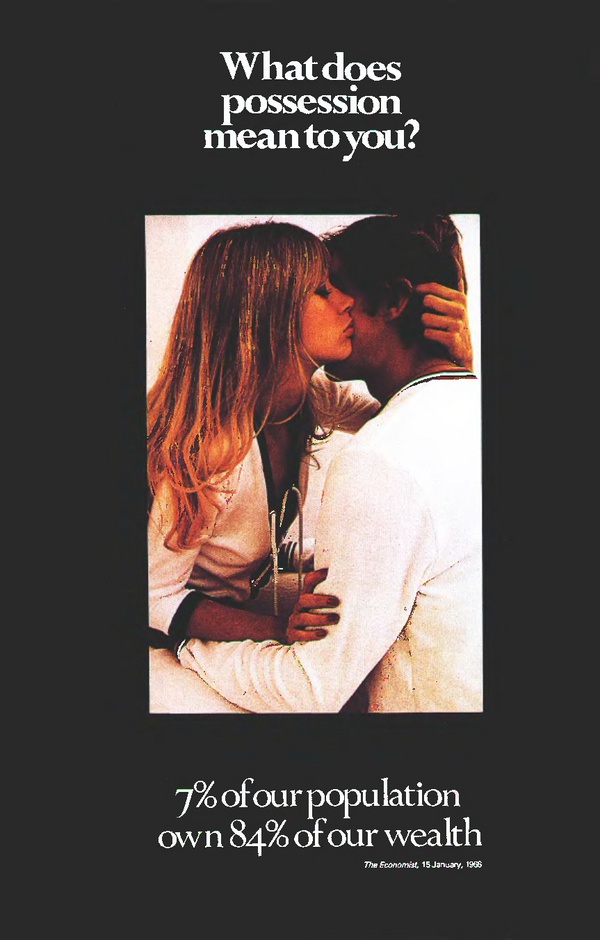 Richard Saltoun Gallery announces an exhibition of works by pioneering conceptual artist Victor Burgin (b. 1941). Encompassing his paper-based works from the late-60s to date, the exhibition will focus on his radical intervention into mainstream media through the interplay of text and image.

Victor Burgin first came to prominence in the late 1960s as an originator of Conceptual Art, when his work appeared in such key exhibitions as When Attitudes Become Form (1969) at the ICA London, and Information (1970) at MoMA, New York. He has since remained one of the most consistently influential artists and art theorists of his generation.
The exhibition features some key works from the 70s and 80s that deconstruct photographic images in relation to their juxtaposed texts, such as Framed (1977, from the series US 77), which subverts a Marlboro cigarette campaign, and Possession (1976), a series of 500 posters installed throughout the city of Newcastle upon Tyne showing a man and woman embracing next to the statement ‘What does possession mean to you? / 7% of our population own 84% of our wealth’.

Drawing on the conventions and rhetoric of mass media imagery, Burgin began to produce allegorical works with photographs and text. These works operated both on the printed page (posters, postcards, books, exhibition invitations, magazine interventions) and the gallery wall. In 1986 he wrote:

My decision to base my work in contemporary cultural theory rather than traditional aesthetics, has resulted in work whose precise ‘location’ is uncertain, ‘between’: between gallery and book; between ‘visual art’ and ‘theory’; between ‘image’ and ‘narrative’ – ‘work’ providing work between reader and text.

In this sprit Burgin has produced a number publications that defy categorization. Work and Commentary (1973) Between (1986), Some Cities (1996), Venise (1997), Voyage to Italy (2006) and Components of a Practice (2008) are not catalogues, nor monographs, nor “artist’s books”, nor “theory” books narrowly defined. Their hybrid form reflects Burgin’s hybrid thought and work.

In addition Burgin has produced a number of books that anthologize his influential essays and interviews: Two Essays on Photography and Semiotics (1976), Thinking Photography (1982), The End of Art Theory (1986), In/Different Spaces. Place and Memory in Visual Culture (1996), The Remembered Film (2004), Parallel Texts. Interviews and Interventions about Art (2011)

The exhibition at Richard Saltoun Gallery will be the artist’s first solo exhibition at a private gallery in London since 1986. It will be also displayed in tandem with the major solo exhibition Victor Burgin – A Sense of Place at Ambika P3, University of Westminster, London.
Biography:

Victor BURGIN (b. 1941, Sheffield). A student of painting at the Royal College of Art, London, from 1962 to 1965, Burgin then studied Philosophy and Fine Art at Yale University School of Art and Architecture until 1967. Upon returning to the UK, he was introduced to Roland Barthes’ seminal text Elements of Semiology, which led to his expanding interest in text, language and semiotic theory. Burgin first came to prominence with his inclusion in Harald Szeemann’s seminal exhibition Live In Your Head: When Attitudes Become Form (ICA, London 1969), where he exhibited Photopath (1967), photographs of the floor on which the work was to be installed, exactly matching the scale of the floor itself.

David Campany is a writer, curator, photographer and teacher. He has taught at the Winchester School of Art; the Surrey Institute of Art & Design; and is a Reader in Photography at the University of Westminster, London.