A Journey of Ideas Across

In Dialog with Edward Said. On the tenth anniversary of his death, the interdisciplinary symposium will reread Said's works. Lectures, conversations, discussions, performances, films, workshop. 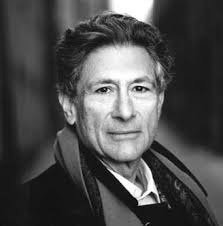 When Edward W. Said died in New York City on September 25, 2003, he was praised as an influential theorist, a public intellectual, and a symbol of the struggle for a just peace in the Middle East. During his life, Said produced a body of work that has retained its resonance in a variety of fields and areas worldwide. On the tenth anniversary of his death, the interdisciplinary symposium “A Journey of Ideas Across” will reread Edward Said’s works – from Orientalism (1978) to On Late Style (posthumously, 2006) – with a view to cultural and political realities today, including those in the Arab world.

Said’s body of work caused a paradigm shift in the humanities and the social sciences. Furthermore, his ideas have transcended the boundaries of academic debate. During political upheavals in a number of Arab countries, activists turned his concepts into their slogans. In Tunisia, his words appeared as graffiti on the walls of the revolting streets. From October 31 to November 2, 2013, international scholars and artists will gather at Haus der Kulturen der Welt to explore Said’s critical work as an inspiration in questioning the histories and futures of contemporary social challenges and revolutionary movements.

The symposium aims not only to extend the venture of engaging Said’s relationship to the world and current realities, but also to set off from the most obscure entries, hence left unguarded. Based on the Arabic concept of al muthanna, which refers to a relationship between two entities that is neither a couple nor a duality, “A Journey of Ideas Across” will imagine and examine situations that go beyond the binary logic of dichotomies and oppositions. Using formats that take up Said’s interdisciplinary method of inquiry, the symposium will reflect on the themes “Orientalism Traps,” “Engagement, Resistance and Imagination,” “The Anti-Narratives of Late Style,” “Power, Weakness and Agency,” and “Beyond the Limits of Power.”

Personal readings of some of Said’s texts will be offered by philosopher Akeel Bilgrami, literary scholar Samia Mehrez and writer Feridun Zaimoğlu. Other keynotes will carry some of Said’s observations, including his critique of dichotomies, into the present and to yet unexplored fields: literary theorist Abdelfattah Kilito will address literary questions linked to places and relationships of duality; filmmaker Trinh T. Minh-ha will contemplate questions around time, strangeness, mobility, and stillness; anthropologist Mahmood Mamdani will reflect on the historical significance of the Post- Apartheid transition in South Africa and art historian W.J.T. Mitchell will explore representations of mental illness across a variety of media. Playwright Mohammad al Attar will present a staged reading that questions perceptions of the ‘homeland’ with regard to Syria, while artists Basel Abbas & Ruanne Abou-Rahme, in their lecture-performance, search for a radical imagery break from colonialism and capitalism. Ahl al Kahf movement, in turn, brings Said’s thought not only to Tunis’s streets, but also to Berlin’s. Discussions with political economist Prabhat Patnaik and the sociologists Asef Bayat and Meltem Ahiska, among others, will explore notions of imperialism, power, and knowledge production. Finally, the film program “The Anti-Narrative of Late Style” curated by James Quandt showcases the trilogy made over the last decade by Jean-Luc Godard as an illustration of Said’s observations on ‘late style.’

The idea of this symposium was born over the course of two workshops held in Berlin and Tunis in 2012. In response to the political revolts and upheavals in several Arab countries, the workshops examined the role of actors in the cultural field and reflected on the social, cultural, and political shifts and effects of these revolts in a global context. In the framework of the symposium, a third workshop will bring together some twenty-five thinkers, theorists, students, and artists from different countries in the Arabic-speaking world and from Germany to reflect on “Al Masha or the Space of the Common” today. Workshop participants will debate and critically reflect ways in which the public and common spaces are constituted, occupied, maintained and shaped. Troubling issues and constructive ideas emerged during the workshop will be shared with the public on Friday, November 1.

Curated by Adania Shibli with Akeel Bilgrami and Katrin Klingan

A Journey of Ideas Across – In Dialog with Edward Said
Funded by the Federal Foreign Office
Supported by Goethe-Institut and A.M. Qattan Foundation
In cooperation with Dialogue Café, University of Hildesheim