A number of paintings from an ongoing series of Self Portraits, a length video installation, and recent video works 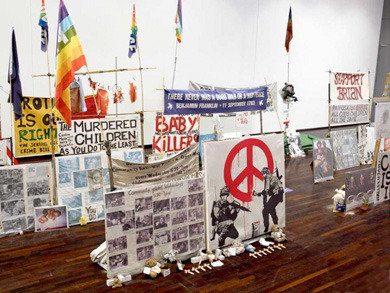 Mark Wallinger is one of the best-known figures in the British art world. In 1999 his 'Ecce Homo' occupied Trafalgar Square's fourth plinth to great acclaim and in 2001 he represented Britain at the Venice Biennale. Wallinger turns everyday moments of life into transcendent possibilities. Wallinger is not concerned with individual artistic expression but in constructing art with ideas and elements drawn from his own environment. The elements are chosen for their associative potential and in order to provoke a personal response from the viewer. For his exhibition, Wallinger will show a number of paintings from an ongoing series of Self Portraits. Also included is his feature length video installation, Construction Site (2012) and Shadow Walker, another recent video work. The works demonstrate Wallinger's ability as an interlocutor between the everyday and the intangible, with an eye for the overlooked, and an astute philosophy addressing relationships between the micro and macro/ politics and art. Curated by Elaine Forde. Opening Event: Saturday 7th of September 8pm.