In his exhibition Grand Tour Fujiwara fills the elegant 19th-century villa's rooms with artifacts, letters, archeological fragments, and sculptures inspired by his travels. Czech is showing her two new series of photographs, Poems by Repetition and Voyelles. 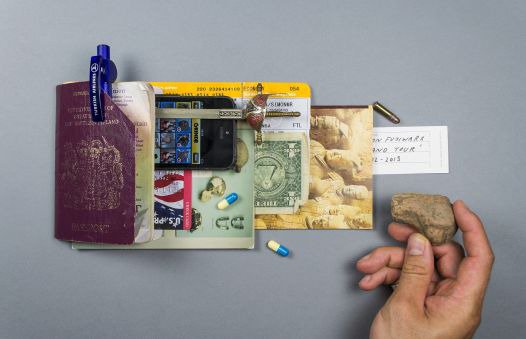 Simon Fujiwara (*1982 in London, lives in Berlin) seeks out stories for his works. His points of departure are the biographies of strangers as well as his own, which he randomly interweaves with historical persons and events and to which he adds fictitious elements. Personal aspects and those that apply to society as a whole, fact and fiction inextricably blend and are presented to the viewer in elaborately staged spaces. With his delicate sense of humor, Fujiwara poses serious questions concerning the manipulation of history and collective memory as well as the mechanisms of oppression and violence, authority, and power. The artist slips into constantly new roles for his installations, performances, plays, and literary works, becoming an archeologist, architect, writer, or director.

In his exhibition Grand Tour at the Kunstverein Braunschweig, Fujiwara fills the elegant 19th-century villa's rooms with artifacts, letters, archeological fragments, and sculptures inspired by his travels in Europe, Asia, South America, and the Middle East. Reflecting on the 'grand tour,'' during which optimistic young men of the northern European elite traveled to southern Europe in the 19th century collecting artifacts in a rite of passage that was both educational and entertaining, Fujiwara's own journeys are the starting point for a number of projects that explore the shifting terrain of national identity, political correctness, poverty, wealth, sexuality, and industry through his uniquely personal, modern-day narratives. Built in 1808 at a time when Europe was at the height of global dominance, the Kunstverein villa becomes the setting for the artist's eccentric and unfinished projects, including a half-finished Roman City, blueprints for an African museum devoted to incest, the smashed sculptural fragments of a working-class English girl made in rural China, and a labyrinth of interrogation rooms housing a Beirut beach, a photographer's studio, and the identity of a potential terrorist masquerading as a casino croupier.

Simon Fujiwara studied architecture at Cambridge University, after which he studied fine art at the Städelschule Frankfurt. He has received the Cartier Award and the Baloise Art Prize (both in 2010) for his work. He has furthermore participated in numerous international group exhibitions and biennales (including Venice in 2009, São Paulo in 2010, and Singapore in 2011). The Tate St. Ives devoted a large-scale exhibition to Fujiwara in 2012.

The exhibition is sponsored by: Niedersächsische Sparkassenstiftung, Braunschweigische Landessparkasse, and the State of Lower Saxony

NATALIE CZECH
I CANNOT REPEAT WHAT I HEAR

Natalie Czech (born 1976 in Neuss, lives in Berlin) is showing her two new series of photographs, Poems by Repetition and Voyelles, in the Remise at the Kunstverein Braunschweig. In these as well as in many others of her photographs, poetry makes up a fundamental component of her motif. Reading in such diverse media as newspapers, picture books and e-books, the artist marks individual words with the intent of uncovering bit by bit the poems that are concealed within the text. She subsequently photographs the images produced by this subjective act of reading, weaving them into an 'allegory of reading.'

In her Poems by Repetition (2013) series, Natalie Czech expands this idea to encompass an 'allegory of writing.' The starting point for the new photographs is Gertrude Stein's theatre text Saints and Singing (1922), which focuses on repetition as a rhetorical stylistic devise and the wide range of its applications. Employed in a narrative, it facilitates the development of a dynamic, processual and rhythmizing form that leads to a tonal composition in the space-comparable to an echo or a refrain. To this end, Czech has selected poems by such writers as Gertrude Stein and Allen Ginsburg that utilize repetition stylistically. In order to depict them photographically, she makes use for example of a record cover by Pink Floyd, dance step instructions or an iPad advertising photograph. But it is first the multiple illustrations of the motif that are strung together in a group that enable the concealed poem to become visible and legible with the assistance of colored markings. In the case of A poem by repetition by Gertrude Stein, for example, an interview on four tablet computers can be seen that deals with diverse theses on music by German philosophers (Kant, Nietzsche, Marx, Hegel). Not only do contentual references to the respective poem emerge in the individual works from the meticulously researched and selected text fragments but to music in equal measure as well.

Natalie Czech studied at the Düsseldorf Art Academy. The Kunstverein Hamburg, Ludlow 38, New York, the Nassauische Kunstverein, Wiesbaden, and the Kunstverein Langenhagen, among others, have all dedicated solo exhibitions to her work. She has furthermore participated in numerous group shows, for example at the Kunsthalle Fribourg (CH), Made in Germany II, Hannover and the Kunsthaus Bregenz (A). An artist's book will be published in November 2013 by Spector Books in cooperation with the Kunsterverein Hamburg on the occasion of the exhibition.

The exhibition is sponsored by: State of Lower Saxony