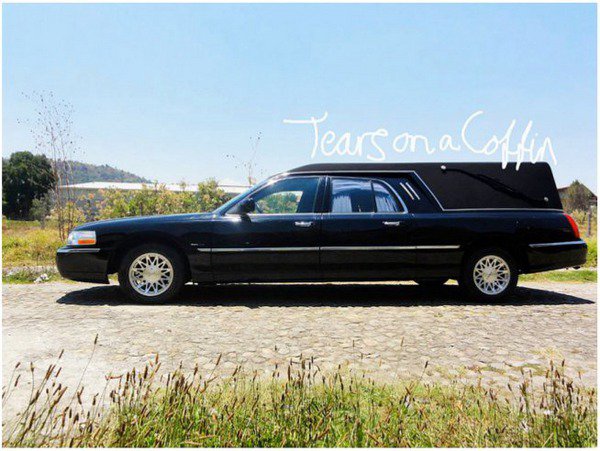 Presented by No Longer Empty and Sunnyside Shines BID

No Longer Em pty is pleased to announce Conveying the Invisible, four site-specific art interventions curated in New York’s neighborhood Sunnyside, Queens on the occasion of the first- ever Sunnyside Restaurant Week. No Longer Empty will present the work and practice of four international artists illuminating the neighborhood’s cultural richness in culinary diversity and art.

Curated by Sarah Corona for No Longer Empty, Conveying the Invisible investigates the beauty and wonder that nature and the human condition can offer. From video installations (Erika Harrsch), live painting performances (Simonetta Moro), to an invasion of fresh baked butterflies (Carlo Steiner) and a touring neon-funeral car (Anne Katrine Senstad), those site responsive works address the often invisible aspects of love, life, death and rebirth within the unusual and often challenging field of public space.

Body maps by Erika Harrsch is a video animation that immerses the spectator into an extraordinary view of the beauty and nature and the human body. Partly filmed, partly drawn, this visual tale bewitches our senses and connects to Eros Thanathos , an endless flock of butterflies questioning the beginning and the end of life and a reference to migration, transformation and adaptability.

Italian artist Carlo Steiner will invade with Butterflies the interior of Restaurant Venturo with holy bread wafers cut into the forms of butterflies. Attached to the walls as if they were holy objects from an ancient Wunderkammer, those fragile creatures will invoke an atmosphere of grace and suggest a communal sharing of bread and wine. Invoking less transubstantiation than death itself, is the light installation and music performance by Anne Katrine Senstad: a funeral car with the neon sign saying Tears on a Coffin . The installation will be parked in front of the Irish Pub PJ Hogan’s accompanied by a Mariachi Band, that will celebrate loss as a gathering event, and questioning political contexts and spiritual values. The relocation of the neon sign into the pub will be a further metaphor for accompanying one’s loves throughout the final journey. Sim onetta Moro will present a live painting perform ance on a restaurant window, attempting to capture the flow of pedestrians within the urban environment.

The artworks will be exhibited for two consecutive weeks (Nov 4-16) at the following sites:

In addition, three of the artists will give public live perform ances on Monday Nov 4, 2013 in each of the participating restaurants:

ANNE KATRINE SENSTAD Anne Katrine Senstad is a multidisciplinary Norwegian artist who lives and works in New York. She works in the intersection of installation art, photography, video, site and time specific work, and land art, bordering the definition of architecture, sculpture and spatial relations. She was educated at Parsons School of Design and The New School for Social Research in New York.
Senstad is exhibiting at The 55th Venice Biennial as part of the exhibition „The Metamorphoses of the Virtual – 100 years of art and freedom“ and at AURORA, Dallas. In 2011 she completed a major public art commission in collaboration with the internationally renowned architecture firm Snøhetta and Ohio State Arts Council Percent for Art Program, at The Wolfe Center for the Arts, BGSU, Ohio.
She has exhibited widely internationally at Zendai Moma in Shanghai, ThisIsNotAgallery in Buenos Aires, Utsikten Kunstsenter and Stiftelsen 3,14 in Norway, Björn Ressle Gallery, Gary Snyder Gallery, Gallery Nine5 and Elga Wimmer Gallery in NY, Pink Gallery in Seuol and KK Projects in New Orleans amongst others.

CARLO STEINER
Carlo Steiner is a multidisciplinary artist whose practice focuses on humanity's dual relationship with nature. He involves the spectator in the re-appropriation and re-definition of the concept of the natural through artificial creations. Other works originate from personal experiences in which the artist re-interprets the past and present, the personal and collective, and the material and cognitive in their incessant evolution, nullifying any possibility to stop it and bring it to a conclusion. His deep analysis of New Media and Journalism, especially in relation to print, catalyzes further debate, both social and aesthetic, about power and manipulation through media.
Steiner has exhibited in major Italian museums and public institutions such as Castello Sforzesco, Milano (2012), Careof DOCVA, Milano (2011), Museo Diocesano, Milano (2011), Sede Fiat Corso Marconi, Torino (2010), and MLAC, Roma (2010).

SIMONETTA MORO
Simonetta Moro’s practice focuses on painting, drawing, writing, and teaching. A personal history of urban nomadism informs her work, which has been exhibited in the US and Europe, including the Center for Architecture, New York; Museum of Contemporary Art, Chicago; the American Academy in Rome, Italy; and the Harris Museum, Preston, UK.
Moro graduated with a Ph.D. in Fine Arts from the University of Central Lancashire in Preston, UK; MA from Winchester School of Art, UK; and BFA Painting from the Accademia di Belle Arti in Bologna, Italy. She lives in New York City and is the director of the Institute for Doctoral Studies in the Visual Arts. Simonetta Moro is currently working on a mapping project in and about Venice and its historical cartographic representation under the auspices of the Gladys Krieble Delmas Foundation.

ERIKA HARRSCH
Born in Mexico City, Erika Harrsch has lived and worked in Mexico, Italy, Germany and since 2001 in New York. Her multidisciplinary art practice employs resources that include drawing, painting, photography, video, animation and installations as a scenario building based on elements in both artificial and natural environments. Presenting intimate aspects of the human condition, inviting and seducing the viewer to evidence their direct contact with reality through the sense perception.
Harrsch has participated in several Art Biennials including: Fokus Lodz Biennale, Poland 2010; Beijing 798 Biennale, China 2009; and the 5th International Media Art Biennale-Media City Seoul; Korea 2008. Her work has been exhibited in solo and group exhibitions at galleries and museums in Mexico, USA, Brazil, Argentina, Korea, China, Belgium, Germany, Italy, Sweden, Spain, UK, Poland, Turkey and Syria. Presented in museums such as the Whitney Museum of American Art at the Live Whitney series, Bellevue Arts Museum, WA, the Göteborg Konstmuseum in Sweden, the Museé de la Photographie a Charleroi in Belgium and the Seoul Museum of Art in South Korea. She was participant artist of No Longer Empty’s exhibition „How Much Do I Owe You!” in Long Island City.

ABOUT NO LONGER EMPTY
Founded In 2009 as a response to vacancies created by the financial crisis, No Longer Empty has since evolved to be a dynamic and galvanizing cultural force in New York City.
Through combining the vitality of the contemporary art world with the values of building community, No Longer Empty presents a new paradigm for public art practice.
With 14 exhibitions in four years, NLE has revived the history of spaces such as the iconic Tower Records store, the officers’ homes on Governors Island, an old belt factory in Brooklyn, and the Andrew Freedman Home in the Bronx. Each site was transformed into a hub of art, culture, and education, catalyzing real and sustainable social change in neighborhoods and communities across New York. More information at www.nolongerempty.org.