Additionals, the unique conversation between the artists. Combining existing items, the exhibition bears a resemblance in attitude, and continues the lineage of Pistoletto's The Minus Objects. 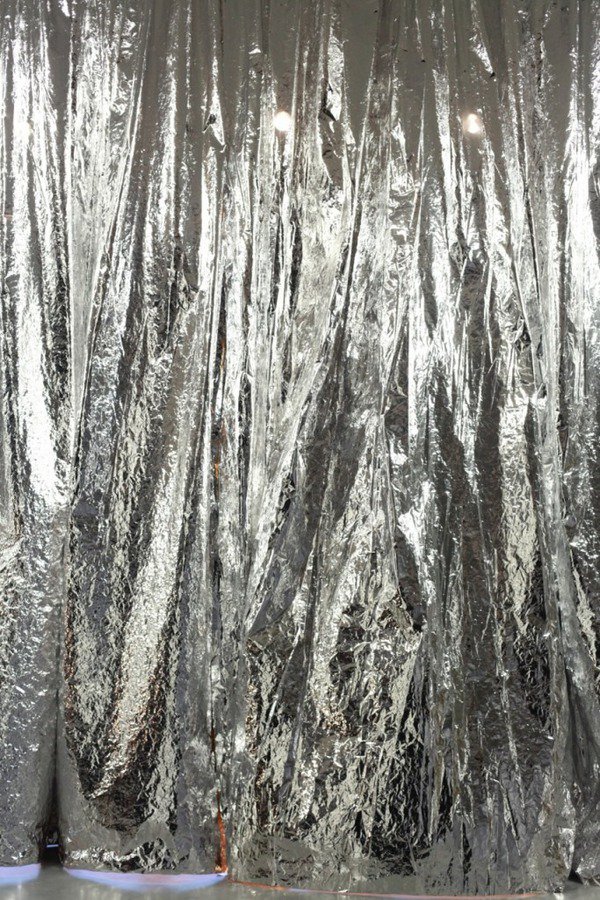 In this unique artistic conversation between artist Céline Condorelli and theatre artists The Company, Project Arts Centre brings together the two prominent strands of our artistic programming.

The gallery becomes home to five sculptures—Structure for Communicating with Wind, Structure for Listening, Structure for Preparing the Piano, Structure for Reading and Structure for Public Speaking—provocative hybrids of form and function, useful things and purposeless things. These are Additionals, the cast that resulted from Céline Condorelli's journey as Tiger with Cornelius Cardew's score The Tiger's Mind, developed during the project initiated by filmmaker Beatrice Gibson and typographer Will Holder. Additionals now feature in The Company's work-in-development at Project Arts Centre.

Combining existing items—a towering bank of sound-system speakers, 'space blanket' modified into a curtain, or an Ercol chair perched atop a step ladder, Condorelli's Additionals bear a resemblance in attitude, and continue the lineage of Michelangelo Pistoletto's The Minus Objects. They further provoke questions around the artness of art objects, appearing as props or backdrops in other filmed contexts. Trained as an architect, and the author of the acclaimed Support Structures, Céline Condorelli has made it her artistic project to interrogate the unwritten assumptions of display structures, the authorative autonomy of the art object, and the singular identity of the artist. Additionals are the cast which are asked to play various roles, to stand in for different purposes, to provide a function.

The gallery, and Céline Condorelli's exhibition, will become the site of The Company's creative process, as they work with these five structures for the duration of the exhibition. The Company has repeatedly mined its own theatrical form in an attempt to disrupt conventional theatre, but also embraced those conventions as the scaffolding of meaning. Evolving from Condorelli's interest in support structures, objects and identity in art and architecture, The Company will work with Additionals to look at similar constructions of meaning and occupation in theatre: "We want to strip away the impulse to narrativise Additionals as props, or manufacture any sort of representation. We want to know these five structures as objects."

And thus we present, with as yet unknown outcomes: Additionals – Céline Condorelli, featuring The Company.

Céline Condorelli (CH, IT, UK) is an artist who works with architecture; she is the author and editor of Support Structures published by Sternberg Press (2009), and one of the founding directors of Eastside Projects, an exhibition space in Birmingham, UK; she is currently Professor at NABA (Nuova Accademia di Belle Arti) Milan. Recent exhibitions include: ‘The Parliament’, Archive of Disobedience, Castello di Rivoli, Italy; ‘Puppet Show’, Eastside Projects, Birmingham; ‘Additionals’, Pavilion, Leeds, (2013); ‘Things That Go Without Saying’, Grazer Kunstverein, Austria; ‘Social Fabric’, Iniva, London and Lund Konsthall, Sweden; ‘Surrounded by the Uninhabitable’, SALT Istanbul (2012); ‘There is nothing left’, Alexandria Contemporary Arts Forum, Egypt and Oslo Kunstforening (2011-12).

The Company are Dublin based theatre artists. Nyree Yergainharsian, Jose Miguel Jimenez and Rob McDermott will be taking part in Additionals.Aiming to make work that changes how theatre is made and seen by looking and learning from the everyday, recent projects include: As you are now so once were we (2013); Under the Stairs (2013); Politik (2012); Hipsters we met and liked (2012); and Who is Fergus Kilpatrick (winner Spirit of the Fringe award 2009).