The artist's first exhibition outside Japan and the gallery's first presentation of his work. In nightmarish scenes, suited figures made in his own likeness but possessing machine or animal parts are depicted being boxed and repaired, like helpless objects. 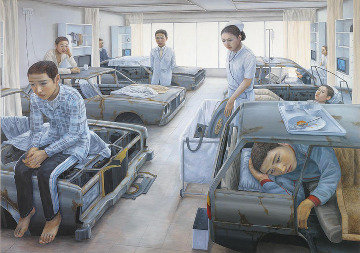 At first, it was a self-portrait. I tried to make myself—my weak self, my pitiful self, my anxious self—into a joke or something funny that could be laughed at...It was sometimes seen as a parody or satire referring to contemporary people. As I continued to think about this, I expanded it to include consumers, city-dwellers, workers, and the Japanese people.
—Tetsuya Ishida

Gagosian Hong Kong is pleased to announce an exhibition of paintings by Tetsuya Ishida, the gallery’s first presentation of his work. This is the first exhibition of Ishida’s paintings outside of Japan. Ishida came of age as a painter during Japan’s “lost decade,” a time of nationwide economic recession that lasted through the 1990s. In his afflictive paintings, he captured the feelings of hopelessness, claustrophobia, and emotional isolation that burdened him and dominated Japanese society. From his early career until his untimely death in 2005, Ishida provided vivid allegories of the challenges to Japanese life and morale in paintings and graphic works charged with dark Orwellian absurdity.

In nightmarish scenes, suited figures made in Ishida's own likeness but possessing machine or animal parts are depicted being boxed and repaired, like helpless objects. Foreground and background are rendered in equally meticulous detail and this intricate compression of layers intensifies the sense of entrapment. The stoic male subjects seem accustomed to their cyborg limbs and dreary surroundings as they carry on in their shared routine. Some men are fully merged with household objects, reduced to little more than functional but inanimate tools and furniture.

Waiting for a Chance (1999) depicts young men in a hospital room, anxiously awaiting their fate as they rest on scrapped auto bodies in place of hospital beds. The striking allegory Descendant (1999), also set in a hospital, portrays a group of surgeons surrounding a child who has been birthed by prehistoric reptiles. In Exercise Equipment (1997), a recurring suited subject is pictured running on a treadmill, monitored by men positioned to hook his ankles should he slow down. These disturbing scenes are consistent with the surreal melancholy of contemporary Japanese authors such as Mahoko Yoshimoto and Haruki Murakami, whose novels propose a society of individuals debilitated by neurosis and traumatic dysfunction.