A Precis 1972-1995. Reichek uses techniques traditionally associated with women's work, including sewing and knitting, to explore questions of language, culture, and authenticity while also elevating media typically associated with craft into the realm of high art. 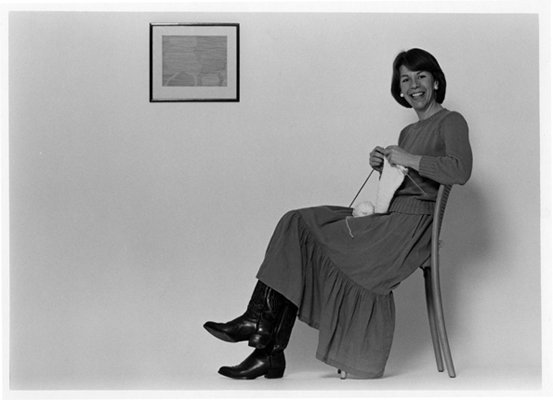 Zach Feuer Gallery is pleased to present Elaine Reichek: A Précis 1972-1995, Reichek's first solo exhibition with the gallery. The show opens November 7, 2013, and is on view through December 21, 2013.

The exhibition presents an overview of Reichek's work through more than two decades. Many of these pieces have never been shown in New York. A non-exhaustive survey, the show aims to link Reichek's minimal, abstract fabric works of the 1970s and the development of her practice through the knit, photographic, and sampler works from the 1980s and '90s.

Reichek uses techniques traditionally associated with women's work, including sewing and knitting, to explore questions of language, culture, and authenticity while also elevating media typically associated with craft into the realm of high art. As her work has changed visually, she has extended the connections her 1970s work made between fabric and feminism to encompass examinations of "the other" in multiple cultures, as well as issues of documentation, the archive, photographic truth, and modernist practice.

Reichek uses a number of formal techniques to encourage the viewer to read and understand objects and images in dimensions beyond their original functions. In one early multipart knitted work, for example, she combines a colored-pencil graph charting the knitting instructions for a pair of infant's mittens with the mittens themselves; the drawing turns out to have an architectural dimension, resembling a little house. Later works extend this suggested coidentity between dwelling and costume, and the mutability Reichek finds here emphasizes the instability of the sign, and the mind's capacity to see one thing as something else quite different.

In later work from the 1980s and '90s, Reichek extends the associative logic implicit here by deliberately misinterpreting the objects and symbols in photographs-translating structures and figures into knitted objects hung directly on the wall, or adding subjectively chosen color to black-and-white images. A shelter seen in an appropriated ethnographic photograph becomes an abstract knitted sculpture, now collapsed, colored, and hung upside down. The method emphasizes a colonizing culture's tendency to misinterpret and aestheticize the artifacts it comes across in its travels, and the translation from photographed form to knitted form replicates the way information is passed from language to language and in the process reshaped and altered, its content never quite the same. Working in related ways with ethnographic images of individuals, Reichek undermines the camera's pretense at conveying their "truth," which is as absent from the photograph as their bodies are from her flat knitted forms.

Elaine Reichek (b. 1943) received her BFA from Yale University and lives and works in New York. She has exhibited extensively in the United States and abroad, including solo exhibitions at the Jewish Museum and the Museum of Modern Art, New York; the Palais des Beaux Arts, Brussels; the Tel Aviv Museum; the Wexner Center for the Arts, Columbus, Ohio; Stichting De Appel, Amsterdam; and the Irish Museum of Modern Art, Dublin. Her work is in the collections of New York's Museum of Modern Art, Jewish Museum, Museum of Arts and Design, and Brooklyn Museum; The Museum of Fine Arts and the Isabella Stewart Gardner Museum, both in Boston; the Pennsylvania Academy of the Fine Arts Museum, Philadelphia; the Norton Museum of Art, Palm Beach, Florida; the Spencer Museum of Art, University of Kansas; the Irish Museum of Modern Art in Dublin, among others. Reichek's work was included in the 2012 São Paulo Bienal in Brazil, the 2012 Whitney Biennial in New York, and the Cheongju International Craft Bienniale 2011 in Korea.