A Day in the Life / 2001 #1 2003 / Zig Zag Cubism. The gallery presents a double show context from the artist, where effects are more pointed and crystallized. 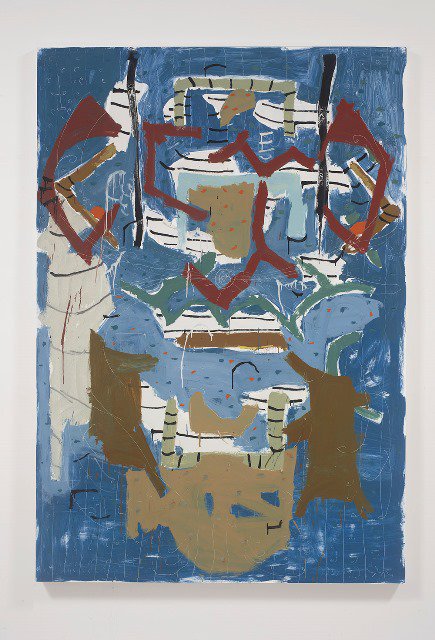 The structure for Aldrich's upcoming show is that of two distinct parts. The first, opening November 8th, will be on view for a week and a half, after which a second show will open on November 19th and run through the end of the month, and then back to the first show for the remainder of the exhibition, closing December 21st.

A Day in the Life
The 2nd show, entitled "A Day in the Life", obliquely refers to the structure of the Beatles song of the same name that features, and is perhaps most known for, its format of being two separate songs in one-- a McCartney song plunked down in the middle of a Lennon song. The title also refers to a text written by Aldrich in 2004 in which he describes art installations as a collection of fragments (artworks) that when combined describe/ encompass a day in one's life. Aldrich's work is ostensibly about what happens when we see two different paintings hung next to each other, and how this forces us to reconstruct our idea of what each one would have meant seen singularly. In the exhibition, that process is expanded from two separate paintings into two separate exhibitions. The medium of meaning is in the modulation between the works-- in the time and interstitial space that separates this and that.

The works in each exhibition make sometimes subtle and sometimes overt reference to works in the other show, works from previous shows, and to notions of evolution and comparative learning. While this is generally true of Aldrich's work, in this double show context the effects are more pointed and crystallized.

2001 #1 2003
A work from Aldrich's first show at Oliver Kamm/5BE gallery in 2004, from around the same time as the aforementioned text, will be exhibited on loan. In many ways, walking through the space of the first exhibition echoes the narrative of the final sequence of "2001: A Space Odyssey"-- the initial engagement, clashing abstraction, the acknowledgment of self, and finally the ascent of the child/past.

Zig Zag Cubism
A series of, thus far, three paintings, the first shown in 2011 at Sculpture Center, the second in 2011 at Bortolami, in which forms migrate from painting to painting.

Zig Zag Cubism #3 features a text discussing the two dramatically different sides of the Patty Waters lp "Sings" and the swath of linen cut from Looking With Mirror Apparatus, 2008, with notes concerning Two Planes (With Text), 2007.