Everything was sleeping as if the universe were a mistake. The exhibition comprising two new series of works: large format drawings and two multi-part sculptures that continue Horn's exploration of the nature of perception, memory, and identity. 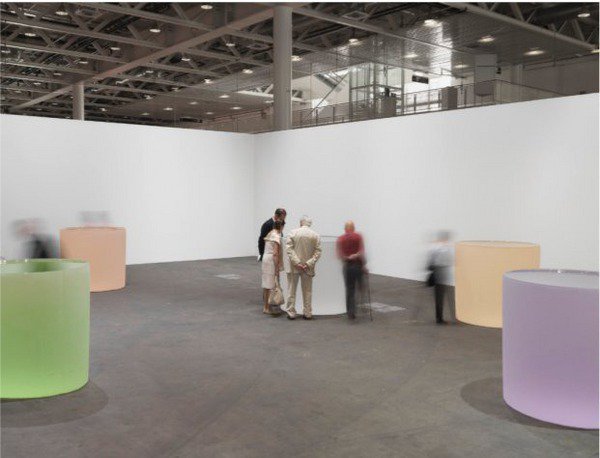 Upon entering the gallery’s soaring sky lit, wood-ceilinged space, viewers will encounter ‘Untitled (“A dream dreamt in a dreaming world is not really a dream, says classical Chinese wisdom, but a dream not dreamt is”)’ (2013), a sculpture comprised of ten cylindrical cast glass elements rendered in hues of violet and bathed in the glow of natural light. At the opposite end of the gallery, visitors will find ‘Untitled (“My name is Mary Katherine Blackwood. I am eighteen years old, and I live with my sister Constance”)’ (2013), a counterpart of the violet glass sculpture but in subtly shifting shades of chamomile, chartreuse, and lime.

Separated but palpably connected, the two sculptures invite comparison and contemplation of accepted notions of ‘likeness’ and ‘difference’. Reflecting the changing natural light from apertures in the ceiling above, Horn’s sculptures partner with the
weather and the constant cycles of time to manifest her binary experimentations with color, weight, and lightness, and solidity and fluidity.

Literary themes surge and resurface throughout much of Roni Horn’s oeuvre, and are present in both her sculptures and her drawings on view at Hauser & Wirth. ‘Untitled (“A dream dreamt in a dreaming world is not really a dream, says classical Chinese wisdom, but a dream not dreamt is”)’ makes reference to prose in Canadian poet Anne Carson’s publication ‘Plainwater’; meanwhile ‘Untitled (“My name is Mary Katherine Blackwood. I am eighteen years old, and I live with my sister Constance”)’ references a passage from Shirley Jackson’s novel ‘We Have Always Lived in the Castle’. Incorporating lines from literature, Horn’s titles offer a narrative portal through which to enter her work, while still retaining an open and inexplicably ambiguous quality.

In the gallery’s central space, visitors will find a room containing Horn’s new series of largescale drawings. This group of works exudes a powerful physical presence, abetted by its resolute color and handling of form. A meandering line roams freely across the surfaces of these drawings, suggesting an outline and relating this new work indirectly to Horn’s recurring
theme of landscape. Here the artist manages to achieve both exquisite complexity and a masterful reduction of forms.

The element of drawing has been an integral part of Roni Horn’s artistic practice for thirty years. She has said, ‘If you were to ask me what I do, I would say I draw – this is the primary activity and that all my work has this in common regardless of idiom or material’. Presented in juxtaposition with Horn’s sculptures, these wall-mounted works traverse boundaries between two and three dimensions to challenge conventional definitions of ‘drawing’. Rendered as identifiable geometric forms and abstract volumes in both sculpture and drawing, Horn’s art engages new means to push forth investigations of multiplicity and perception.

For Horn, 2013 has amounted to an important year. In January 2013, Horn was awarded the Joan Miró Prize and JRP Ringier also published the first major publication to focus solely on Horn’s extensive drawing practice. Running concurrently with her show at Hauser & Wirth, Horn will present a solo exhibition at the Schirn Kunsthalle, Frankfurt am Main, Germany on view from 12 December 2013 to 26 January 2014. Following in 2014, Horn will participate in the 19th edition of the Sydney Australia Biennale, ‘You Imagine What You Desire’.

Image: Untitled ("The immense accretion of flesh which had descended on her in the middle of life like a flood of lava on a doomed city had changed her from a plump active little woman....into something as vast and august as a natural phenomenon. She had accepted this submergence as philosophically as all her other trials, and now, in extreme old age, was rewarded by presenting to her mirror an almost unwrinkled expanse of firm pink and white flesh, in the center of which the traces of a small face survived as if awaiting excavation.") 2012 – 2013 Solid cast glass with as-cast surfaces, 5 parts
Each part: Height: 124.4 cm / 49 in Diameter: 137 – 129.5 cm / 54 – 51 in (tapered top to bottom) Installation view, Art Unlimited, Basel, Switzerland, 2013 © Roni Horn. Courtesy the artist and Hauser & Wirth