The show Paris-Berlin of Helmut Newton includes more than 200 photographs in black and white and color from all major work series and returns now to its source for a show in Berlin, and the path it has taken is reflected in its title. Upon invitation by June Newton, the American portrait photographer Greg Gorman will present a series of male nudes in a show parallel. 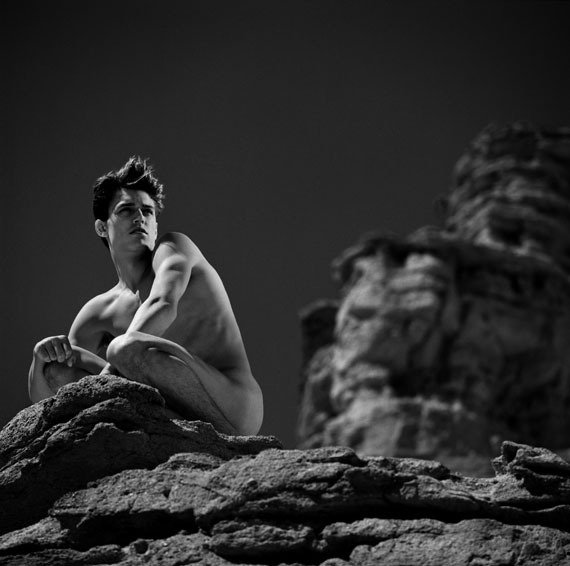 This retrospective exhibition, curated by June Newton and Jérôme Neutres, had been shown at the Grand Palais in Paris in 2012; it was the first comprehensive presentation of Newton’s work since his death in the French capital city where he lived and worked since 1961 for two decades. The show includes more than 200 photographs in black & white and color from all major work series and returns now to its source for a show in Berlin, and the path it has taken is reflected in its title.

While some of the images have been shown in earlier exhibition contexts at the Helmut Newton Foundation, others are presented here for the first time. With every new combination, new dimensions of the work of this renowned photographer allow themselves to be discovered. Customary expectations are challenged by the side-by-side presentation of an iconic image such as “Rue Aubriot, Paris 1975” with a second shot of the same motif, to which a nude model has been added. Here, Helmut Newton photographed a tuxedo by Yves Saint Laurent for French Vogue; this is hardly unusual – notwithstanding the fashion designer’s revolutionary creation – but the manner of photographic staging is unrivalled. A female model with short hair stands self-assured, smoking at night in a narrow, dimly lit alleyway; she appears to wait for no one. In his second photograph of the model, at the same location but now with a nude model at her side, Newton intensifies the already confounding androgyny of the dressed woman. The combination of a clothed with a nude woman in the context of fashion was radical for its time and unfitting for publication in a fashion magazine like French Vogue. Furthermore Newton expanded upon this combination of clothed and nude models starting in the 1980s with his famous series “Naked and Dressed.” Two diptychs from this series are also included in the current show.

The exhibition also presents numerous portraits of notable figures ranging from Pierre Cardin to Margaret Thatcher, fashion photographs for magazines from the 1960s through the 1990s, nudes, as well as product shots. Another highlight are the “Fired” images: the legendary Courrèges photographs that were first published in 1964 in the fashion magazine Queen, and which resulted in Newton’s immediate dismissal from Vogue. These images brilliantly translate the ultra-modern designs of the French designer into the photographic image, challenging convention with the women’s pants, the above-the-knee dresses, and above all the spectacular space-age look. At the time, the image and social status of women at the time were undergoing radical change.

With this exhibition, the Helmut Newton Foundation in Berlin celebrates an anniversary: ten years ago, in the fall of 2003, Helmut Newton established his foundation in a partnership with the Prussian Cultural Heritage Foundation. In the summer of 2004, his Foundation within the Museum for Photography opened its doors in a former military casino, with a double exhibition. The photographer himself was never able to experience the show, as he passed away in Los Angeles shortly before its opening. Yet Helmut Newton lives on through his work. Regular exhibitions are organized and presented not only in Berlin, but made available on loan to various institutions throughout Europe. The 2012 exhibition at the Grand Palais in Paris is one such example.

It was an explicit wish of Helmut Newton to provide a forum also for other photographers and artists at his Foundation. Upon invitation by June Newton, the American portrait photographer Greg Gorman will present a series of male nudes in a show parallel to the Helmut Newton exhibition.
Here in “June’s Room,” we encounter young, trained bodies in black & white prints in various formats, some of them nearly life-sized. For this accompanying exhibition “Men”, Greg Gorman and June Newton selected 25 motifs that were created between 1988 and 2012, for the most part in Gorman’s studio in Los Angeles. Pictured alone or in groups, the young men move before the camera like dancers on an empty stage. Gorman was born in 1949 in Kansas City and currently lives in Los Angeles.
He launched his career in photography while still a student in Kansas City, with pictures he took of Jimi Hendrix at a concert in 1968. Later in California, Gorman remained true to show business, and in addition to numerous commercial jobs, photographed primarily actors and musicians. Some of these iconic black & white photographs were used as film posters; others appeared on the covers of CDs or magazines such as LIFE, Newsweek, Rolling Stone, and Vogue.