No-Mad-Ness in No Man's Land, an exhibition that examines the nomadism of contemporary migrant artists who deliberately resist location and de-territorialize the origins of their work. 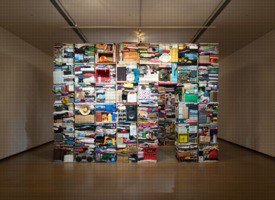 Eslite Gallery is delighted to present No-Mad-Ness in No Man's Land, an exhibition that examines the nomadism of contemporary migrant artists who deliberately resist location and de-territorialize the origins of their work. It consists of a selection of some of today's most successful artists based in or originating from various regions in Asia, including the Middle East. These artists are engaged in the acts of moving, living, and working on multiple continents or are addressing such phenomena in their practices consciously, or in some cases unconsciously. They investigate, challenge, and/ or renew traditional nomadic ideals in view of contemporary lifestyles relative to ideas about space, place, people, movement, and nature. Through their nomadism, these artists elude the fixed identity categories often imposed on them by their country or countries of adoption.

The word "nomad" comes from the Greek and is defined as "the one who wanders for pasture." Since the dawn of the modern era, however, the term has been used to mean one who moves for various reasons. The paradoxes of a life on the move are playfully highlighted in the exhibition's double-edged title—to both acknowledge the real challenges of such a lifestyle and also to examine the often fantastic, uncanny images conjured by the term nomad. Namely, one who engages in wild, uninhibited meanderings in unregulated territories at the mercy of highly unexpected and dangerous conditions and circumstances.

From the 1960s onward, significant numbers of artists from all regions of the world—Asia, Africa, South America, and elsewhere—travelled to Europe and North America, and vice-versa. Whether they immigrated for a short period or indefinitely, their art not only contributed to the dynamics of their newly adopted art scenes but transformed art-making processes, theory, and criticism, and ultimately art history altogether. Art historians are therefore now beginning to recognize the starting point of contemporary art by delineating artists and movements from 1970 forward as "an art that is of the world for the world." This exhibition was inspired by the curators Leeza Ahmady and Ombretta Agró Andruff's acknowledgment of this shift as directly connected to the phenomena of artists increasingly moving from place to place and living and working in countries and regions other than their own, especially over the past three decades.

Some of the artists are culturally and historically connected to the notion of nomadism because of their geographical affiliations; others because they make the concept of nomadism, displacement, and migration one of the central subjects of their art practice; and then there are those who may have touched upon this subject more peripherally but with works that make a strong statement in this specific context.

No-Mad-Ness in No-Man's-Land is an open-ended and ongoing project, which the curators envision gaining a nomadic existence in its own right, traveling through different venues in different countries with the possibility of changing the participating artists as it moves from place to place in order to broaden the dialogue concerning various forms of contemporary nomadism.

Eslite Gallery was founded in 1989 along with the Eslite Bookstore in Taipei, and was the first to dedicate itself to contemporary and modern Chinese art in Taiwan. Today, the gallery continues to represent major international artists as well as rising young artists from Greater China, including Cai Guo-Qiang, Liu Xiaodong, Zhan Wang, Michael Lin, Wong Hoy Cheong, Wang Yuping, among others.