The artists examine different social realities in contemporary Europe. Their artworks (installation, video, drawing, intervention) critique the meanings of equality and social in-equality while questioning the related discourses and symbolisms. The result are scenarios of possible futures: themselves pointing towards the past, present and future. 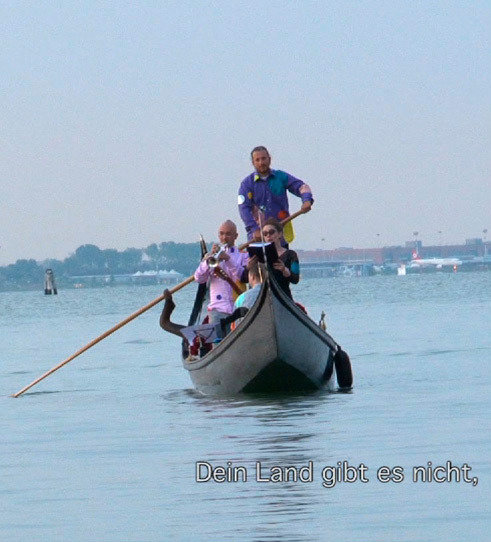 With respect to humanity, one of the general ideals of justice is equality, a right, which was granted to the full citizens of a polis already back in ancient Greece. Today, equality is a constitutional right in many states. Together with other human rights the idea of equality was disseminated in particular in the course of the Enlightenment. Besides liberty and fraternity, equality was one of the three guiding principles of the French Revolution of 1789. Since then however, the historic slogan “liberty, equality, fraternity” has often been replaced with the phrase “liberty, equality, solidarity”; thus shifting the emphasis away from the notion of legal equality and more towards notions of equal distribution, that is, social equality vs. inequality. In the same way as the French Revolution resulted in violent despotism as a means to realise its ideals, Real Socialism with its intentions of social equality and justice functioned through coerced forms of collectivisation and retrenched civil liberties.

The omnipresent crisis and its connected rhetoric have reanimated notions such as equality and justice as concepts that can put a test on the European Union. How equal are Europe’s citizens? And before which law? Which type of equality do the citizens themselves desire? And which ideas of equality are reflected?

The artists in the exhibition examine different social realities in contemporary Europe. Their artworks (installation, video, drawing, intervention) critique the meanings of equality and social in/equality while questioning the related discourses and symbolisms. The result are scenarios of possible futures – themselves pointing towards the past, present and future.

With their on-going campaign ThE riGHt tO RighT, initiated on the occasion of the 7th Liverpool Biennale 2012, the artists Libia Castro and Ólafur Ólafsson draw attention to the current reinterpretation and retrenchment of civil rights in various European countries. The work The Partial Declaration of Human Wrongs, which is presented in the exhibition in different formats, was developed out of this campaign. The artists emphasise that the fundamental right to having rights is the only fair foundation for living communally and in justice. Consequently, the work also expands beyond the protected space of the white cube in order to address a wider public: Castro and Ólafsson have installed the The Partial Declaration of Human Wrongs on the street, thus intervening in the architecture of the .CHB.

With their video rage de passage the artist duo bankleer also directly engages with the architecture and surroundings of the .CHB. The video is projected onto the building’s media façade and shows a group of young people as they repeatedly walk into the glass front of a building on the boulevard Unter den Linden. It is an act of rebellion against a symbolic boundary of exclusionary mechanisms that divide society in spite of its apparent transparency and openness. Another work by the same artists addresses “the way in which symbolic stagings are deeply engrained into our social coexistence”. Addressing feelings of disempowerment and hopelessness, the multi-part piece reality state unfolds a playful counter-image to the threatening scenarios we normally associate with the financial crisis and the resulting recession.

A sense of disempowerment is also at the heart of the work Stummer Diener by Katarina Šević and Gergely László’s (a member of the art collective Tehnica Schweiz). It focuses on Max Frisch’s play The Fireraisers – “a morality without morals” (Biedermann und die Brandstifter: Ein Lehrstück ohne Lehre). In their piece the artists reinterpret various aspects of the play, its history and its contemporary significance. A particular focus lies on the timeliness of Biedermann’s passivity and ignorance (as a representative of the ruling bourgeoisie) in relation to the deep social injustices and inequalities as well as on his own role in this situation.

Olivia Plenders has also used a historical reference as a starting point for her work; the board game The Game of the Goose, a sixteenth century predecessor of Monopoly. Plender’s artistic re-issue, Set Sail for the Levant, demonstrates how deeply strategies of profit maximisation are rooted and inscribed into society. Her piece counters the educational aspiration of games such as Monopoly to systemically teach us how to act in a capitalist society.

Artist Tibor Horváth presents a similarly absurd scenario. With its electronic display and slots for credit cards and cash, the object Donation for the Health of Democracy is reminiscent of an ATM machine. But in Horváth’s case it is built on nothing but air. The money falls straight to the floor where it becomes accessible as a sort of public donation box. Anyone can see the money and anyone can take it – a modern memorial to the idea of “give and take”.

Spanning three years, CRITIQUE AND CRISIS is a programme series at the SITUATION ROOM that aims to question the concepts of liberté, égalité and fraternité in its foundational role for democratic order and as the last common denominator for a European crisis policy. Is the Enlightenment really the last common denominator of a European self-image? And if so, what is its relationship to the world’s condition of permanent crisis? The .CHB’s three-year event series aims to probe these assumed rationales of European unity. In this crisis about the crisis it is the crisis we critically question.

SITUATION ROOM is a temporary intelligence management centre located at the .CHB that provides a space for monitoring, researching, discussing and commenting on situations of crisis.

This project was financed with the support of the European Commission. Responsibility for the content of this press release lies solely with the author; the Commission is not liable to the further usage of the information in this document.