Cliches, Florian Pumhosl's debut in London, with elements created using a stamping implement of the same name, describes the sound a metal press makes each time it is struck in the printing process. In advance of its 50th anniversary in 2017, the gallery is staging "Nostalgic for the Future", a retro-futuristic survey of historical and contemporary British sculpture and installation that questions where the lines of time, influence and artistic inspiration could be drawn. 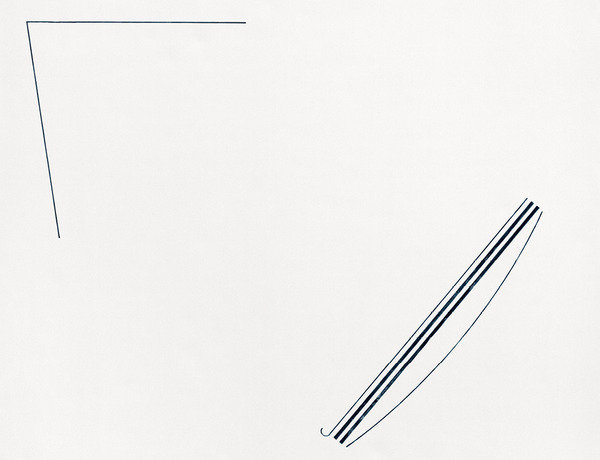 Florian Pumhösl’s five series of Clichés (2012), debuting in London, were created using a stamping implement of the same name, itself an onomatopoeic French word that describes the ‘cliché’ sound a metal press makes each time it is struck in the printing process.
Each Cliché work is formed of three plaster panels that progress in size, with the gaps between the works also growing exponentially. Unlike traditional triptychs, these trios appear to be identical in their minimalist visual language, despite their leaps in scale, as if each design had been rescaled and reproduced in triplicate. This seriality is also evident in the formal patterns that dance across the plaster panels, the whole installation recalling a musical score or a time-based sequence.
Aside from references to early Modern art, Pumhösl’s stamp paintings display his interests in pre-Columbian textile patterns and three-dimensional architectural space. For his latest series, the artist has stamped old Georgian script on to plaster using the same printing block method, effectively reproducing obsolete letters from an alphabet that are unreadable to all but scholars of Aramaic or ancient Greek.
Whether the starting point is typography or textiles, Pumhösl creates a new vocabulary at one remove from recognition. He describes his quest to transform images and objects into elegant and spare arrangements as one of a struggle with the medium of mass-reproduction: “Whatever abstraction might represent historically, to me it is a tool to measure my freedom”.

About the artist
Florian Pumhösl processes the tropes of art, architecture and graphics of the modernist avant-garde to create new aesthetic systems through painting, film and installation. He addresses the legacy of modernism through its canon of abstract visual language, from utopian architectural plans and buildings to innovations in publishing, the politics implicit in exhibitions and the motifs of early experimental filmmaking. In a series of minimal glass paintings, previously shown at the Lisson Gallery geometrical shapes float in space, while their titles – including Plakat (Poster), Seite (Page) and Aushang (Notice) – identify the shapes as reductions of typographical elements from the 1920s. Where their original function was to aid interpretation of a text, here they are devoid of text and interpretation proliferates. In OA 1979-3-5-036 (2007), Pumhösl converted a 17th-century Japanese Kimono pattern catalogue into a 16mm animated film, selecting, simplifying and rearranging the patterns in order to ultimately arrive at a typology of fragments. Again, the title grounds the work in research: it is the British Library catalogue number for the original source. Moving between countries and media, Pumhösl picks up the skins shed between prototypes and artefacts, in readings that undermine the possibility of closed cultures.
Florian Pumhösl was born in Vienna in 1971, where he lives and works. He studied at the Höhere Grafische Bundeslehr und Versuchsanstalt Wien (1989–91) and the Hochschule für Angewandte Kunst Wien (1989–97). Solo exhibtions include Kunsthaus Bregenz (2012-13); The Art Institute of Chicago (2012); Museum Moderner Kunst Stiftung Ludwig Wien (MUMOK), Vienna (2011); Kunstverein für die Rheinlande und Westfalen, Düsseldorf (2010); Musée d’Art Moderne Grand-Duc Jean, Luxembourg (2009); Neue Kunsthalle St. Gallen (2005–06); Seccession, Vienna (2000). Exhibiting togehther with his colleague Mathias Poledna, he created a new installation for Raven Row, London in 2011 and Pumhösl has also participated in documenta 12, Kassel, Germany (2007) and the São Paulo Biennial (2006).

About Lisson Gallery
Lisson Gallery is one of the most influential and longest-running international contemporary art galleries in the world. Since being founded in 1967 by Nicholas Logsdail, it has championed the careers of artists who have transformed the way art was made and presented. These include many important Minimal and Conceptual artists, such as Sol LeWitt and Richard Long, as well as a whole generation of significant British sculptors from Anish Kapoor and Richard Deacon to Shirazeh Houshiary and Tony Cragg. It continues to support the future of its artists, the legacy of historical figures, the evolving practice of established artists and the wide-ranging potential of emerging and new talents.
In addition to two exhibition spaces in London, one in Milan and an office in New York, the Lisson Presents programme of off-site exhibitions extends a legacy of curatorial innovation beyond the gallery spaces, working with institutions and artists to present new initiatives around the world. As well as showing and supporting an important array of international artists, such as Marina Abramović, Ai Weiwei, Gerard Byrne, Liu Xiaodong, Tatsuo Miyajima and Santiago Sierra, Lisson Gallery also represents many younger artists of this stature, including Allora & Calzadilla, Nathalie Djurberg & Hans Berg, Ryan Gander and Haroon Mirza.

Nostalgic for the Future

In advance of its 50th anniversary in 2017, the Lisson Gallery is staging a retro-futuristic survey of historical and contemporary British sculpture and installation that questions where the lines of time, influence and artistic inspiration could be drawn or where they might ultimately lead. Originally staged in São Paulo earlier this year, as Nostalgia para o futuro, this newly-configured exhibition celebrates the multi-generational programme of the gallery, ranging from its representation of significant British sculptors from Anish Kapoor and Richard Wentworth to a younger generation that includes Angela de la Cruz, Ceal Floyer, Ryan Gander and Haroon Mirza. The show takes its name from a 2006 text work by Jonathan Monk, another of the Lisson Gallery’s 44 represented artists (16 of whom are included here), which spells out the words NOSTALGIC FOR THE FUTURE in projected green laser-light writing.

Evoking the creative tension between past and potential possibilities of the creative imagination, many of the 35 works in the show are twinned with earlier or later examples by the same artists, subconsciously pairing different stages of their practices across the decades. The radical underpinnings of Art & Language, for instance, as seen in a propagandistic series of Ten Posters from 1977, are juxtaposed with two later works dealing with the suppression of information in abstract painting – yet the notion of an anonymous author remains constant.

Early examples of the revolutionary assemblages of found objects by Tony Cragg will be on display, as well as a painted steel work by Julian Opie titled Abstract Compositions with Pilchards (1984), both of which look ahead to the equally systemic and primary-coloured construction of stacked IKEA tables by Ryan Gander, Samson’s Push, or Compositie (2010).

In addition to the visual push and pull of works throughout the show, the interplay between artists is equally strong in terms of their personal and professional relationships with one another. Many of these artists have become close friends during their time at the gallery or even taught or mentored colleagues who have joined more recently, strengthening the synergy between the gallery’s origins, its present manifestations and its future incarnations.

The inaugural iteration of this morphing, touring show, Nostalgia para o futuro (2-21 April 2013 at the Centro Brasileiro-Britânico) marked the first major presentation of the gallery’s programme in Brazil, alongside its presence at São Paulo’s art fair, SP-Arte. It was also part of the gallery’s sustained curatorial activity beyond its established spaces in London and Milan, known as Lisson Presents, which has also recently initiated projects in Venice, for Ai Weiwei and Shirazeh Houshiary, and Beirut, where the Lisson Gallery collaborated on an international group show, The Magic of The State, which opened concurrently in London.