Without Fear or Reproach

The exhibition, curated by the Brussels art dealer Jerome Jacobs, gathers together the subjective visions of 19 artists, mainly living in the US, on the aftermath of 9/11. A tragi-comic selection in a disrupted environment, with a certain humorous optimism, as in Colin Cook's video ''Everything is Beautiful'' 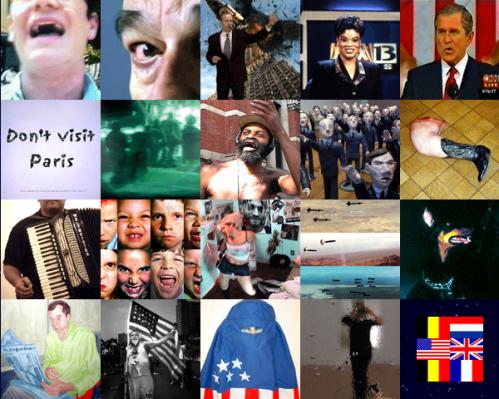 From 18th November to 13th December 2003, the WITTE ZAAL art center in the Belgian city of Ghent is presenting ''Without Fear or Reproach''.

The irony of numbers: 9/11, the sum of all fears - 911, dialling for hope and help as in Christoph DRAEGER's amazing 4-channel video filmed in the streets of NY.

The exhibition, curated by the Brussels art dealer Jerome JACOBS, gathers together the subjective visions of 19 artists, mainly living in the US, on the aftermath of 9/11. A tragi-comic selection in a disrupted environment, with a certain humorous optimism, as in Colin COOK's video ''Everything is Beautiful''.

Since September 2001, America has managed to become the focus of worldwide passion. The nation is hesitantly trying to re-emerge from its ashes. Thousands of opinions have been given on why ''it'' happened and why America's retaliation has been so reckless. Politicians, sociologists and intellectuals from all sides have told their story and still the inexplicable remains unexplained. Or so it seems.

One of the purposes of this exhibition is to provide another course. Not all the works in ''Without Fear or Reproach'' are the product of 9/11. Some were created long before. They have indeed been wilfully taken out of their original context. Are they visionary?

This is by no means a deliberate critique of the United States in the new millennium. No gratuitous violence, no cheap mockery. Just the simple display of a particular perception.

The attack on the Twin Towers gave rise to a frenetic crusade against so-called ''evil''. War should have meant deliverance, helped by the dehumanisation at the heart of this lethal game or by the aesthetic bombing of unseen victims. Terrorism is just bloody horror with no good reason, like John ISAACS' realistic sculpture of a dismembered booted leg.

More precisely, fear and sorrow gave rise to unbridled anger and blind hatred and common sense was banished. Ryan McNAMARA's ''Angry Americans'' asks the much-avoided question: Could this anger be triggered by the absence of control?

Perhaps the perpetrators achieved their goal after all. The enemies are crying ( Jiri DAVID's photographic series ''No Compassion'') but haven't they been wrongly identified?

Obsession creates taboos on such images as the portraits of the nineteen 9/11 terrorists, recreated by painter Joy GARNETT in a clichÃ© of terror.

A country that champions freedom is muzzled by secrecy, conspiracy and restraint. The irritating whisper persists: was this the consequence or the opportunity?

Politics are in the line of fire. The legitimacy of leadership is created and cancelled by a single cut and paste (Maria FRIBERG's video ''No Time to Fall'', 2001), Congressmen are shown patriotically voting through dubious policies (Jon HADDOCK's impressive ninety-eight 2-feet high figures reconstructing US congress voting the Patriot act), and extremism is coated in sweet phrases (drawings by Rainer GANAHL).

The media are also barracked for their improper display of reality and for thereby influencing public opinion in a way no different to propaganda. Misinformation can lead to a total illusion steered by anger and fear.

So, what is really so different about 9/11 ? As Leon GRODSKY expresses in his video installation ''Great Balls of Fire'', surprise was not one of the emotions felt that day.

Violence courses through America's veins. Could things be what they seem in David NICHOLSON's life-size painting of a man with a doberman, who might appear suspicious, perhaps even threatening, but in Alex McQUILIKIN's video ''Teenage Daydream, it's only Rock 'n Roll'', ''the passionate teenage assassin'' sings innocently.

The power of art lies primarily in its blatant visibility. It can sometimes be what it appears. That is what will shock the viewer. It is to be hoped that, returning from this journey into madness, he may realize that violence is just one of so many options.