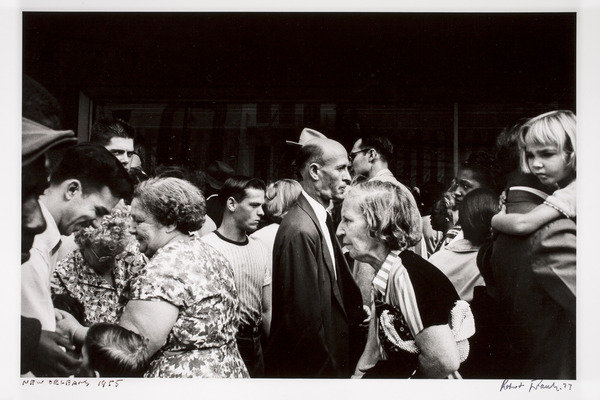 Featuring masterworks by photographers Edward Weston, William Henry Fox Talbot, André Kertész, Robert Mapplethorpe, and many more, the New Orleans Museum of Art's upcoming exhibition, Photography at NOMA, explores the museum's rich permanent photography collection through a selection of some of its finest works from the early 1840s to the 1980s.

The first comprehensive presentation of works from NOMA's collection since the 1970s, the exhibition includes over 130 of the most important photographs in the museum's collection and presents rare and unusual examples from throughout photography's history. On view November 10, 2013 through January 19, 2014, the exhibition highlights the tremendous depth and breadth of the museum's collection and includes photographs made as works of art as well as advertising images, social documents, and more. The photographers featured in the exhibition range from some of the most recognizable names in the field, including Henri Cartier-Bresson, Robert Frank, and Lewis Hine, to unknown photographers-reflecting the vast spectrum of photographic activity since the medium's inception in the 19th century.

"NOMA began collecting photographs seriously in the early 1970s when photography was not commonly found in American art museum collections. Today our holdings include nearly 10,000 works, representing a broad range of creative energy and achievement,” said Susan Taylor, NOMA's Director. “Our collection has strong roots in New Orleans history. Our city has long been an epicenter for the work of established and emerging photographers and we are delighted to share this aspect of New Orleans history with our audiences.”

"Since its origins, photography has infiltrated every aspect of modern life, from art to war, and religion to politics and many of these applications are represented in NOMA's extensive collection," said Russell Lord, Freeman Family Curator of Photographs. "Despite the collection's long history, it remains one of the best kept secrets in this country. Photography at NOMA is an opportunity to re-examine and bring to the fore the diverse range of works found in the collection."

The Photography Collection at NOMA
Since the 1970s, NOMA has built an extensive collection of photographs that represents a wide range of achievement in that medium from the 1840s to the present. Today the collection comprises nearly 10,000 works with images by some of the most significant photographic artists including Berenice Abbott, Ansel Adams, Diane Arbus, Ilse Bing, and Edward Steichen, among many others.

The collection includes examples that reflect photography's international scope, from an 1843 view from his hotel window in Paris by William Henry Fox Talbot to a view of Mount Fuji by Kusakabi Kimbei, but it is also strong in photographs made in and around New Orleans by regional and national photographers such as E. J. Bellocq, Walker Evans, Clarence John Laughlin, and Robert Polidori.

NOMA is dedicated to presenting the photography collection in exhibitions, publications, and educational programs, and to continuing to build the collection to better reflect recent scholarship on the history of photography. Russell Lord, Freeman Family Curator of Photographs is responsible for the care, development, and interpretation of the collection.