Antoni Muntadas' rigorous practice includes performance, video, photography, multi-media installations, publications, web-based projects and public art. The show is organized into 9 constellations of thematically linked works from different moments of the artist's career and traces the diverse subjects that have occupied his interest for 4 decades. 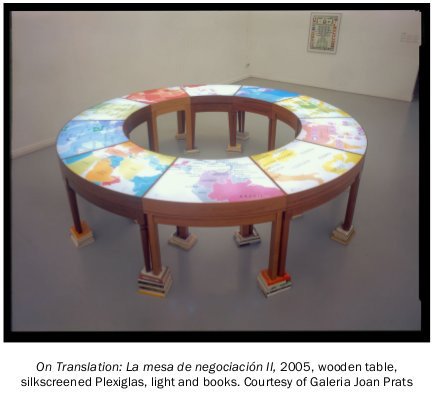 A pioneer in the fields of conceptual and media art, Antoni Muntadas' rigorous practice includes performance, video, photography, multi-media installations, publications, web-based projects and public art. Muntadas: Entre/Between, a survey exhibition of the artist's more than forty-year career, includes a selection of key works that manifest his ongoing exploration of the important political and social issues of our time.

Incorporating in-depth research and astute readings of cultural situations, Muntadas' incisive works have addressed ideas such as the relationship between public and private, the role of the media in transmitting ideas and information, and the complex dynamics of architecture and other social frameworks. From his early works of the 1970s that utilized the senses and his 1981 manifesto that demanded audiences consider "What are we looking at" to his ongoing series On Translation, which wrestles with cultural interpretation, Muntadas has created a vast body of work that investigates the visible and invisible systems of power in a society dominated by the spectacles of mass media, hyper-consumption and constantly evolving technologies.

The Gallery's Chief Curator/Associate Director Daina Augaitis was invited by the artist and the Museo Nacional Centro de Arte Reina Sofía, Madrid to curate this major exhibition, a great honour and recognition of Augaitis' ongoing engagement with the artist's work. The exhibition opened to great acclaim at the Reina Sofía—one of Europe's most prestigious contemporary art museums—in November of 2011 with an official ceremony attended by Queen Sophia of Spain before travelling to the Museu Gulbenkian in Lisbon and the Jeu de Paume in Paris. The Gallery is thrilled to be hosting the final presentation of this important international exhibition.

Muntadas: Entre/Between is organized into nine constellations of thematically linked works from different moments of the artist's career and traces the diverse subjects that have occupied his interest for four decades.

The exhibition is accompanied by an illustrated 302 page catalogue with essays by critics and art historians.

A MEDIA PREVIEW RECEPTION of Muntadas: Entre/Between with the artist and Daina Augaitis will take place on Thursday, Novem ber 7 at 4:00 pm at the Gallery.
Opening on November 8, 2013, 7pm