Premi Internacional d'art Contemporani Diputacio de Castello. The show this year will rely on the input of Alvaro de los Angeles, a curator who will be in charge of organising the different exhibits in a number of theoretical contexts: Places, Narratives, Distances and Questionings. 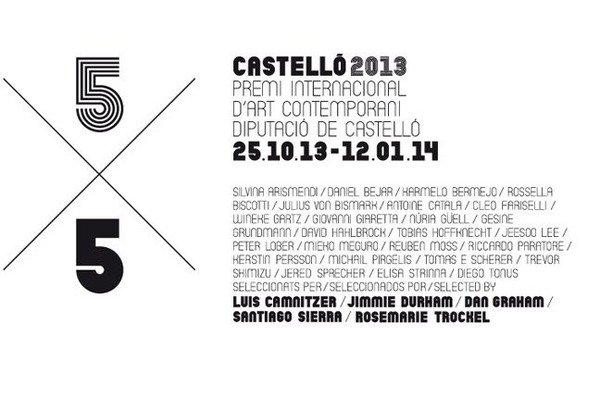 As in previous edition the selection process is carried out in three consecutive phases which are nevertheless connected and interdependent in order to ensure the set goals.

In the first phase five internationally renowned artists are contacted and asked to participate altruistically by proposing a list of five young contemporary artists who they believe are developing practices of undeniable quality and creative significance. For this year’s edition the group of five is made up by: Luis Camnitzer, Jimmie Durham, Dan Graham, Santiago Sierra and Rosemarie Trockel.

Once their proposals have been accepted and after the individual lists put forward by each one of them has been sent to us and compiled, the second phase of the project begins. We now contact each one of the artists contained in the above lists. They are informed about the criteria and intentions of the event, and also of the artist who nominated their work and considered it worthy of being included in the project. After receiving the corresponding dossiers, the EACC will complete a new selection aimed at deciding which pieces will eventually be incorporated into the exhibition. Only those pieces selected by the committee will qualify for the €30,000 cash prize.

The third phase is materialised in the actual exhibition, 5x5Castelló2013. Premi Internacional d´Art Contemporani Diputació de Castelló, which this year will present a number of innovations that will surely add interest to the project. On one hand, the exhibition this year will rely on the input of Álvaro de los Ángeles, a curator from Valencia, who will be in charge of organising the different exhibits in a number of theoretical contexts: Places, Narratives, Distances and Questionings, thus formalising an interpretational visit of the exhibition. On the other hand, for the first time the exhibition will be held simultaneously in two venues: the Espai d´art contemporani de Castelló, in Castellón, and El Convent Espai d’art, in Vila-real. The exhibition will open on 25 October at the EACC and on 31 October in Vila-real.

In parallel, the EACC has convened a jury made up mostly by art critics and museum directors, who will be in charge of deciding the winner of the prize. The decision will be taken following the principles of quality and excellence of the winning piece, which will then be incorporated into the collection of Diputació de Castelló (Provincial Council of Castellón)