Days and Ages. Through the images, Panayiotou examines the island's political rituals and ceremonies and shows how the country's self-image was constructed during the turbulent period following the island's independence from British colonial rule in 1960. 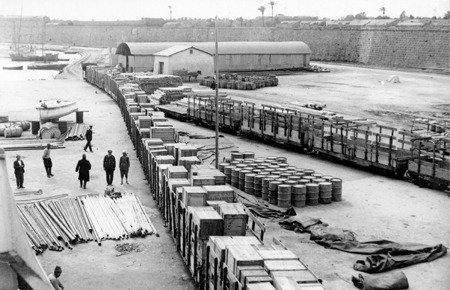 The exhibition title Days and Ages paraphrases the archeologist Einar Gjerstad’s Ages and Days (1933), a memoir of the Swedish Cyprus Expedition, which conducted wide-ranging excavations on Cyprus between 1927 and 1931. Under an agreement between the Swedish government and the British colonial administration, half of the unearthed terracotta objects were shipped to Sweden. While a grant holder at Iaspis in Stockholm in 2009, Christodoulos Panayiotou (born 1978 in Limassol, Cyprus) researched the archive associated with the Cyprus collection, now part of the Medelhavsmuseet collection in Stockholm.

“A specific photograph of wooden crates with antiquities ready to leave the port of Kyrenia attracted my attention first. It is a very charged image incorporating several layers of my obsessions, such as the establishment of archeology as a modern foundation of the nation state; colonialism and symbolic domination; materiality and negative presence. Soon after, when going through its records, I realized the precious nature of the material and the role that the archeological excavation had in the construction of a certain image of Cyprus during the early 1920s, but also projecting backwards into antiquity,” says Christodoulos Panayiotou.

Following this trail, he produced a large-scale ceramic floor using the same process as for his work The Sea, presented at Dokumenta 13. In his choice of materials, Panayiotou emphasises the way in which national symbols serve as modern-day mythology engines, along with natural resources. During the manufacture of the terracotta tiles in the artist’s birthplace, Limassol, pumped water was replaced with saltwater from the Mediterranean. The terracotta floor in Days and Ages (2013) gains yet another context from the encounter between Moderna Museet’s architecture and its materials: birch, oak, and limestone – selected by the building’s Spanish architect Raphael Moneo as a reflection of what is Nordic.

“Panayiotou’s oeuvre raises questions on how collective narratives are created and visually manifested. Once again, a ship with handmade terracotta objects leaves Cyprus for Sweden. When Panayiotou ships the terracotta tiles, he highlights how national identity is exported and communicated across borders,” says curator Matilda Olof-Ors.

Several works in the exhibition are based on archive material. The images in the photographic groupings The Invention of Antiquity, The Invention of Tradition, and The Invention of Folklore (2011) are from a national archive, the Press and Information Office, instituted to portray the republic’s first president, Greek-Orthodox archbishop Makarios III. Through the images, Panayiotou examines the island’s political rituals and ceremonies and shows how the country’s self-image was constructed during the turbulent period following the island’s independence from British colonial rule in 1960.The series New Office (2012) shows how the gestures and objects that Makarios III surrounded himself with shaped the official narrative of a new political era, after the 1974 division of the island-state in its current form.

Christodoulos Panayiotou has a background in dance, performance, and anthropology. His practice interweaves the methods of the researcher and the choreographer, often focusing on various forms of power relations and exchanges. Panayiotou was born in Limassol, Cyprus, in 1978. He lives and works in Limassol and Paris.