Works on paper and the rest. In his work the artist defends the report landscape ecology, while saving the very form of nature. 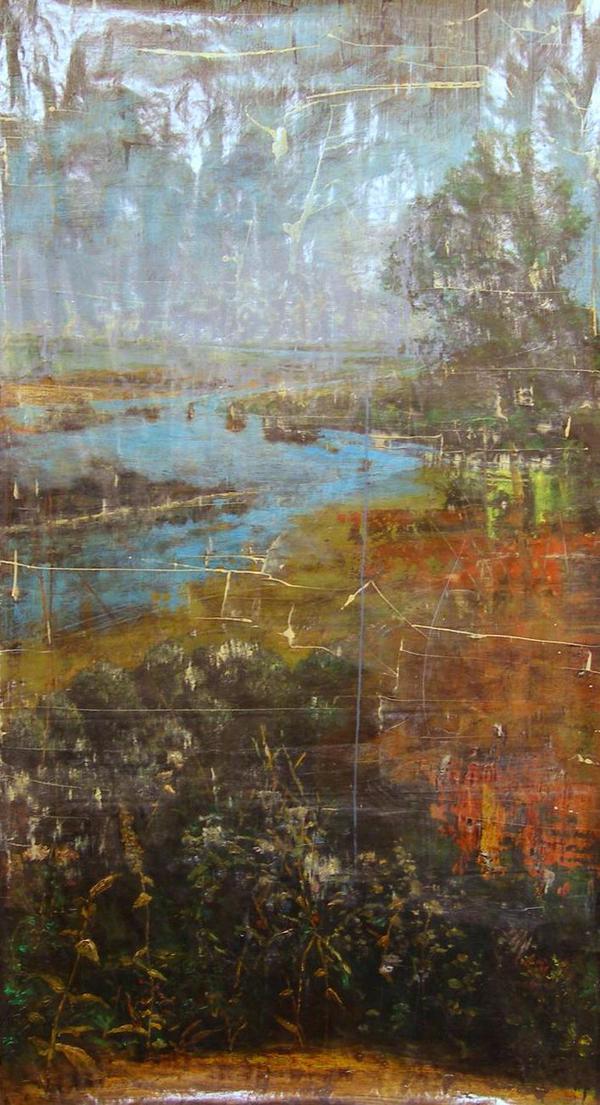 Nature has long been the leading element of inspiration and artistic language by the Slovenian artist Jernej Forbici (Maribor 1980), which research becomes once again present at a historical moment in which ecological disasters , environmental policies are more important critical to the future of our planet.

The scope of his entire work after more than ten years of activity has yet to be discovered and also foreshadows in this cycle of new works other forms , colors, questions that progressively amplify their meanings . His works extend to infinity toward the intimate, as the physical and mental projection , becoming an extended field .

If in the history of man , creator of the world was described as a demiurge , because it was originally a farmer and gardener and was an object of nature that transcended the image , the same lies today in the works of Forbici the man is like a parasite, constantly following his evolution , changing the world around him, changing the actual environment and with it the landscape, he deposit of its own manipulations.

Looking and questioning with the history and tradition of the paint, the artist continue to follow and research innovating evolution of the colours and materials. Since his career begin, he remains particolarly fascinated by the use of paper, an »excellent material« as he use to defined. If in the history of mankind and of its creativity despite the art market which has been able to perpetuate over time the idea of paper's inferiority in comparison with other materials which are considered as nobler in the artistic use, a lot of contemporary artists continue their dialogue with the art system and create art pieces on paper. For Forbici, the basic thing in the particular character of its use is because is an plastic, versatile, ductile, malleable, material which, on the contrary, other materials do not have and make it alive, reactive under the impulses it receives. Starting from this idea, in his paintings, here presented in small and very large size, both on paper and canvas, the painter throws us through strong colors (they are mostly red , earth , ocher, green , blue, purple ), a play of transparency and encounter of material ( stretched , manipulated or re-created ) to the reading of a situation of widespread destruction throughout the world , where the demiurge , the man left the room - parasite , fight, questioning and sometimes converses with the man - artist.

In his work Jernej Forbici, defends the report landscape ecology , while saving the very form of nature. From entry through the color, material and shape to that sense of discomfort , pain, hurt and anger that arise from profound disturbance of nature with respect to modernity.

Born in Maribor, Slovenia in 1980, Jernej Forbici undertook studies in painting at the Academy of Fine Arts in Venice, Italy under the mentorship of Prof. Carlo Di Raco.

He represents the young generation of Slovenian art but also due to his experience in different Countries - European art. His work has been presented in numerous solo and group exhibitions throughout Italy, Austria, Slovenia, Belgium, Germany, Switzerland, France, Slovakia, Czech Republic, Croatia, United Kingdom, Argentina, Canada, United States and Japan.
In recent years he has been invited to participate at several biennials including HICETNUNC in Italy (2003); IBCA International Biennale of Contemporary Art in Prague, German Pavilion (2005); Accade - 51°Venice Biennale (2007) and 53° Venice Biennale, Italian Pavilion (2011). In 2009 the Academy of Fine Arts in Venice dedicated to him a retrospective exhibition in the Magazzini del Sale curated by Carlo Di Raco.
Lives and works in Kidricevo, Ptuj, Slovenia and Vicenza, Italy.

Galerija FO.VI
Strnisce 6 - Kidricevo
Every Monday, Wednesday and Friday from 9 am to 1 pm and on Saturday from 2pm to 6 pm