Editionshow groups together artists' editions, ephemera and smaller productions, which have come alive in recent years, and for which it is always more difficult to find the place and time for promotion. 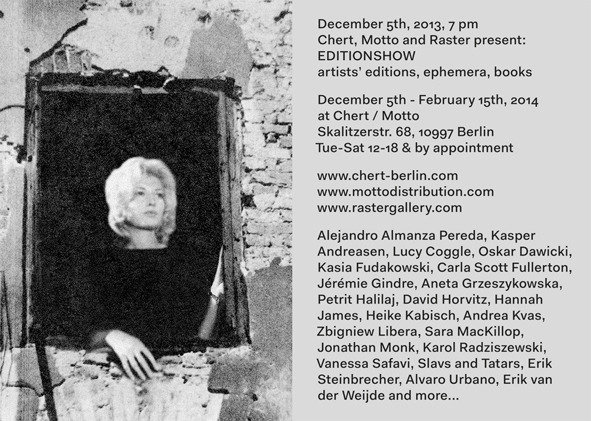 Chert is pleased to dedicate the final part of the year to an exhibition inspired entirely by what is often described as a “side-production” of the artists. Together with Gallery Raster from Warsaw, and Motto bookshop from Berlin, “Editionshow” groups together artists’ editions, ephemera and smaller productions, which have come alive in recent years, and for which it is always more difficult to find the place and time for promotion.

Smaller productions and editions are often capable of integrating delicacy and irony in their execution; this show wants to not only highlight the importance of this aspect, but also welcome the possibility for a younger and bigger public to collect art.

Chert has been producing different editions and publications over the course of the past five years; ranging from prints, collages and neons to small installations, objects and mixed media. These will be presented together with our publications. The books are printed in many different ways, from photocopies or risograph, to digital or offset. On occasion of this show, each of the artists represented by Chert gallery will present one or more editions, and a small table will be dedicated to the publications produced or coproduced by the gallery so far.

Raster gallery is one of the pioneers of the Polish art editions market. Raster’s aim is to present contemporary art in a broader context, contributing to its understanding and paving a way for building home libraries and collections in Poland. For over ten years the gallery has cooperated with accomplished artists from Poland and abroad, across generations such as Michał Budny, Rafał Bujnowski, Aneta Grzeszykowska, Wilhelm Sasnal and Zbigniew Libera - whose works are now also available as limited edition series.

Raster will present editions by Oskar Dawicki, Aneta Grzeszykowska, Zbigniew Libera, Slavs and Tatars and Karol Radziszewski. Special attention should be paid to the selection of Libera’s editions, especially The Messenger Girl – a hand-crafted portfolio containing 12 duotone prints on cotton paper depicting fictitious characters. Libera incorporated the figures and faces of twentieth century movie stars, inserting them into the scenery of the Warsaw Uprising as photomontages originally featured in the book What is the Messenger Girl Doing.

Motto will present a range of editions by Kasper Andreasen, Sara MacKillop, Jonathan Monk and Erik Steinbrecher, which are among several produced for presentations at the bookshop, since the Berlin location opened in late 2008.

We look forward to seeing you for this occasion!
Chert, Raster, Motto