Continuing in its series of invitations to large collections, lille3000 has now invited the Galerie Perrotin. This exhibition show more than 100 works by artists who have been collaborating with the gallery during the past 25 years. 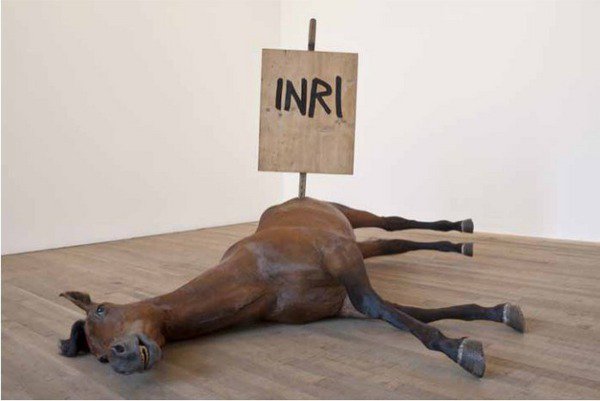 For several years now, Lille has been shaping its image as a cultural capital. A capital that brings art and creation into the lives of its residents while also promoting the major events for which it is famous.
In autumn 2013, there will once again be events to look forward to. And in more ways than one...
Because lille3000 is returning to the Tripostal – the venue that so strongly embodies Lille’s cultural reputation – for a new rendezvous with contemporary art.
Because it is in Lille that the exemplary and internationally recognized Galerie Emmanuel Perrotin will celebrate its 25th anniversary.

This invitation follows in a series that we started in 2007 with the François Pinault Foundation, continued in 2009 with the Saatchi Gallery, and extended again in 2011 with the Centre National des Arts Plastiques.
These exhibitions are all so many encounters with contemporary art. They bring the biggest names on the international scene together with emerging artists. They confront us with questions and acts of revolt inspired by Humankind and the world.

These exhibits also tell the stories of private collections. Those of two major private collectors who for the first time exhibited some of their wonderful works “outside the walls”. That of the collector State which holds one of the largest public collections of contemporary art.

Now we are turning to a gallery owner, and through him paying tribute to this profession whose work, although often poorly understood, is no less essential to art.
Our guest, Emmanuel Perrotin, ranks among the world’s most renowned gallery owners, both for the strength of his artistic choices and for his ability to combine exacting standards and instinct. At the Tripostal, in looking back on his career, which is fascinating to say the least, we are presenting a selection of artists with whom he has worked, others whom he has always accompanied, and others again whom he is currently exhibiting.
In this history of the Galerie Perrotin, we encounter icons of contemporary art, including Maurizio Cattelan and Takashi Murakami. Famous international artists like so many wonderful discoveries. Works that have marked the last 30 years, recent pieces or even created in situ.

The exhibition spaces of the Tripostal reflect 25 years of artistic and human adventure, eclectic and exemplary choices and risk-taking. Let us not hold back our delight in celebrating this anniversary. Happy birthday Galerie Perrotin!

Continuing in its series of invitations to large collections (François Pinault Foundation, Saatchi Gallery, CNAP), lille3000 has invited the Galerie Perrotin to take over the spaces of the Tripostal in Lille.

This exhibition will be an opportunity to take stock of the vision of a French gallery owner, Emmanuel Perrotin, through a selection of works by artists whom he has exhibited all through his 25-year career, works that for the most part are held in public or private collections.

The large open spaces of the Tripostal will accommodate more than one hundred works:sculptures and monumental installations by Wim Delvoye, Daniel Firman and Tatiana Trouvé, mobiles by Lionel Estève, «La Filature» and «Vingt ans après» by Sophie Calle, the famous «INRI» by Maurizio Cattelan and works spe- cially designed for the venue by Gelitin, Guy Limone and Pieter Vermeersch. Other rooms will feature works by Japanese artists such as Aya Takano, Mr and Chiho Aoshima. Many French artists will be represented, including Bernard Frize, JR, Kolkoz, Ange Leccia, Jean-Michel Othoniel, Philippe Parreno, Xavier Veilhan and Jean-Luc Vilmouth. Visitors will also discover two sculptures by the Scandinavian artists Elmgreen & Dragset as well as a film by Jesper Just projected onto a large screen.

— Born in 1968, Emmanuel Perrotin opened his first gallery in Paris in 1989 in an apartment in the Marais district of Paris, near the Pompidou Centre. After having occupied nine places from 1989 to 2005, the gallery is now housed in a mansion in the Rue de Turenne. In 2012, he opened a second gallery in  Hong Kong. A third will open next September in New York.

He got his start in the contemporary art world at the young age of 17, when he became the assistant of the young dealer Charles Cartwright, who was already working with artists such as Marina Abramovic or Alighero Boetti. Passionate and self-taught, Emmanuel Perrotin proved to have an eye for talent. In 1991, he or- ganised the first ever commercial exhibition of Damien Hirst’s work, then in 1992 presented the subversive Maurizio Cattelan; the fol- lowing year, he began his collaboration with Takashi Murakami. Since then he has exhibited, among others, Johan Creten, Klara Kristalova, KAWS, Farhad Moshiri, Gianni Motti, Paola Pivi... —