Art being henceforth absent in today's cemetery, the exhibition summons the funerary process into the field of art by inviting around 20 artists to make this the subject of their work. It takes place in two opposed and complementary contexts: the space of Forde, and the Seujet park, an english cemetery. 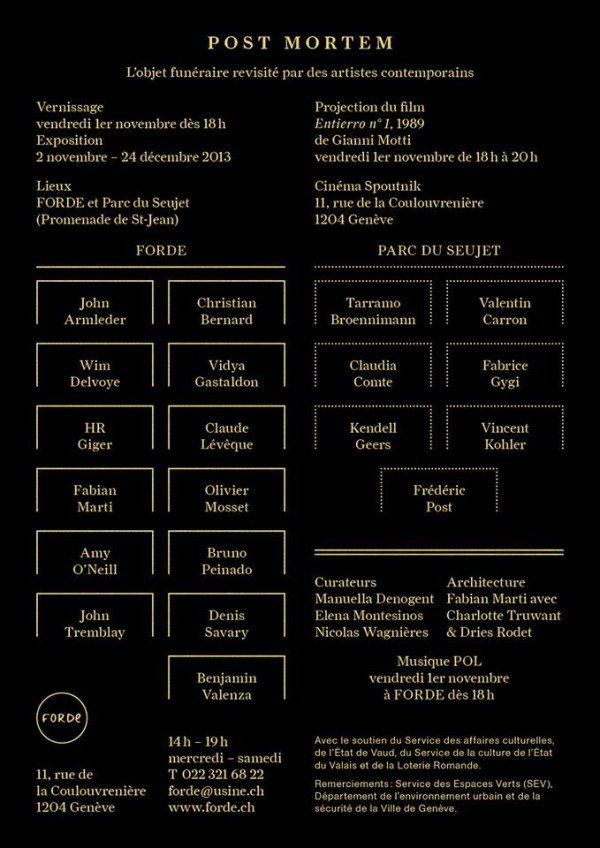 Giving contemporary artists an opportunity to produce works related to funerary art is certainly a challenge, as these two fields, once closely tied, seem nowadays to have little in common.

The burial place, grave or tombstone, appeared relatively recently in human history, a mere 100'000 years ago. Providing insights into the growing complexity of psychological development it is a preferred source of information on the workings and values of the society one studies, be it for historians, archeologists, ethnographers or anthropologists. But what could relics of a cemetery of this beginning of the 21st century reveal about our civilization if they were to be studied by the researchers of the future? Possibly very little, lest one considers the outdated, nearly anachronistic symbolism – religious or not – summoned by the living for their dead as a clear manifestation of a secularized and spiritually disinvested western society. Since the dawn of time, the most beautiful funerary productions have also been artistic realizations. But today the place is occupied by a well-oiled, largely standardized and very lucrative 'death market', frozen into obsolete aesthetics that flirt with kitsch.

Art being henceforth absent in today's cemetery, Post Mortem summons the funerary process into the field of art by inviting around 20 artists to make this the subject of their work. By its unavoidable character that belongs to the world of the dead as much as to that of the living, the cemetery, its monuments and rituals, remains a fundamental social marker and thus provides a fruitful lead for art as well as for the exhibition. Once paralleled, these two universes will echo one another by sharing dedicated locales, fetish and/or memorial objects and the performative character of rituals.

The filiation that may once have related the temple, the mortuary monument and the museum, from an architectural as much as a functional viewpoint – evocation of a figure, conservation of a memory – is receding today behind the contemporary museum's capacity to reinvent itself along with the exhibition tool.

To answer this, Post Mortem takes place in two opposed and complementary contexts: the exhibition space of Forde, for which the artist Fabian Marti has conceived the exhibition's display, a monumental altar on which the different works will be presented, thus conferring a strong sense of solemnity to the ensemble; and the Seujet park, allowing the artists to replay the outdoors context of an english cemetery into the field of public art.

The works presented invite us to reflect on our relationship with death and its materialization, juxtaposing the western vision, characterized by positivism, with practices stemming from shamanism or with symbolic elements derived from science fiction narratives.