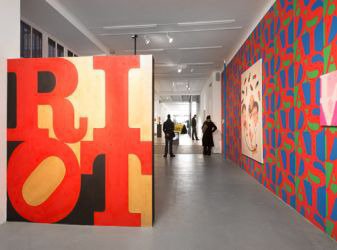 In 1988 the RealismusStudio conceived and materialized “Vollbild AIDS – eine Ausstellung über Leben und Sterben“. With it, the nGbK presented the first exhibition in Europe that extensively dealt with the artistic view on Aids and its impact on people and society.
25 years after this first reassurance of artistic action during the health crisis, the issue is now once more to delve into the theme of social movement and art:
The exhibition project LOVE AIDS RIOT SEX evolves sequentially in two parts. While the first part focuses on the years 1987 to 1995, a time of great despair and massive outrage during the Aids crises, the second part (from January 2014) will present artistic works from 1995 to the present. The two-part format allows separating historical approaches and contemporary perceptions from one another. It enables juxtapositions and explores current responses to the then acclamatory step to raise public awareness – in a time when AIDS has again become a non-topic.

AIDS has been a reality since the beginning of the 1980s. Especially in the early years, gays, prostitutes and drug consumers were threatened to be socially discriminated against and excluded. At the same time, the tabooing of the illness facilitated its further spreading. For this reason, AIDS had to be brought to the attention of the public time and again. The inseparable connection between sexuality, sexual infectiousness, promiscuity and abstinence necessitated well-considered political action and direct help in individual cases. Society, which will have to cope with this fatal, endemic illness for quite a time to come, has seen itself confronted with hitherto unknown challenges. The way in which the issue is dealt with became a touchstone for democracy, equal rights and tolerance, a reason to critically reflect, politically intervene and assume socio-political responsibility.

In 1987 a billboard by General Idea citing Robert Indiana’s famous painting “LOVE” appeared in American big cities for the first time. The letters were changed from LOVE to the acryom AIDS. That same year, the activist initiative ACT UP (AIDS Coalition to Unleash Power) was founded in New York, which in the following years led to many branches being established in North and South America as well as in Europe (in 1988 also in Berlin). In 1987 the artists’ and activists’ group Gran Fury emerged from an artists’ group of Broadway Window of the New Museum. While the “AIDS” billboard by General Idea cynically raised the question of whether, after the age of love and flower power, we had now arrived in the era of AIDS, Gran Fury responded to this statement by calling for upheaval. AIDS became RIOT.

When in 2013/14 we now pose the question: “How has our present-day society arranged itself with AIDS?”, we once again put our finger on a sore spot and also ask: “Has our attitude towards tolerance, otherness and dissent really changed since then?”

At the end of January 2014, a publication on the exhibition project will appear with texts by Martin Dannecker, Frank Wagner und Gran Fury.

[...]
Aron Neubert, a photographer from Berlin, took portraits of his friend and colleague Jürgen Baldiga (*1959 - '1993) on a monthly basis for more than two years between 1991 and 1993. The result is a sensitive and insightful narration of Baldiga's everyday life - twenty-seven oppressively intimate images of dignity, humour and resistance until death.

Reminiscent of a medieval Danse Macabre Hopf presents several scenes of people and skeletons together simultaneously. The individual paper sheets, placed together to form a tondo, are presented much like a baroque ceiling decoration, per- haps for a palace. Indeed, the work was previously shown in the 1988 nGbK exhibit 'Full Blown Image AIDS' hanging from the ceiling of the exhibition space, Berlin's mothballed Westend train station, and was designed specifically for the space.

In 1993, as the IX International AIDS Conference was being held for the first and only time thus far in Berlin, a number of colourful tents were set up by Rinaldo Hopf on the green median of Martin-Luther-Straße. They were labelled "Sex", "Girl", "Boys", "Homo" and "AIDS", all in bold capital letters.

With poster campaigns and banners, Gran Fury turned against the adherents of conservative, fundamental Christian teachings about HIV and AIDS in the United States and against the conservative U.S. government.
The statement "All people with AIDS are innocent" was directed against the presumption of particular churches and religious communities - as well as medical establishments and populist politicians - that only 'guilty people' get AIDS. Due to their 'immoral' lives, only gays, prostitutes and drug users were affected, not 'innocent children'. The "SPRING AIDS ACTION" in 1988 was a nine-day protest campaign in Manhattan to combat such unenlightened yet largely widespread, opinion-shaping commentaries.

"When a government turns its back on its people is it civil war?" came about as a reac- tion to a statement issued by the U.S. government which declared that the number of people who had died of AIDS at the time, around 42,000, was low and called them 'expendable' - they saw no need to take any action in the sense of raising awareness about the medical situation or for patient care. The handshake between businessmen and/or politicians takes place in front of New York City's distinctive Saatchi & Saatchi building, a global advertising agency. This motif was a Gran Fury contribution to nGbK exhibit "Full Blown Image AIDS" in 1988 and was enlarged to billboard-size and posted in Berlin subway stations.

Sunday 01st December 2013, 18 h,
Talk
The Fight Against AIDS: General Idea and Gran Fury A conversation between John Lindell and AA Bronson
[...]
John Lindell is an artist and architect and was a member of the artists' and activists' group Gran Fury (1987 - 1995) / AA Bronson is an artist and healer and was a founding member of the artists' group General Idea (1969 - 1994)