The exhibition will focus on early works, executed from the mid- to late-1980s, which marked the artist's move from painting on canvas to creating makeshift objects constructed out of humble and sometimes humorous materials - such as old broomsticks and carpentry scraps - that he found in the trash. 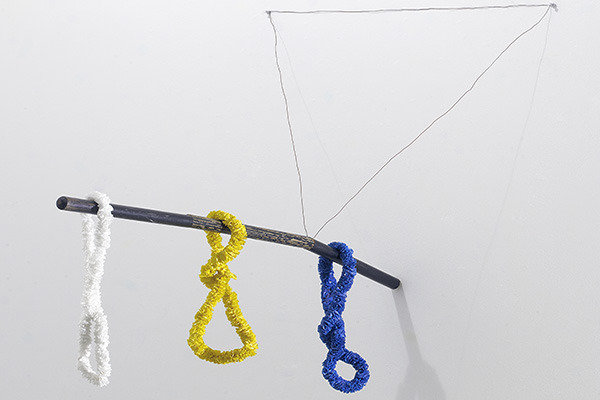 David Zwirner is pleased to present an exhibition of drawings and constructions by Al Taylor, the artist’s fourth solo exhibition at David Zwirner and the first presentation of his work at our London gallery. The exhibition will focus on early works, executed from the mid- to late-1980s, which marked the artist’s move from painting on canvas to creating makeshift objects constructed out of humble and sometimes humorous materials—such as old broomsticks and carpentry scraps—that he found in the trash. Taylor’s drawings and idiosyncratic assemblages offer a multitude of distinct viewpoints as they vacillate between three and two dimensions with their painterly exploration of line, shadow, perspective, and their precise use of color. As described by Klaus Kertess in the catalogue for Taylor’s first solo show in 1986, which included a number of these works, “Al Taylor’s sleight of hand eschews all bravado in favor of a casual clarity and directness. His modest materials and means succeed in constructing new tools for vision.”

About the Artist:
Al Taylor was an American artist known for his uniquely innovative approach to process and materials that encompassed two-dimensional drawings and three-dimensional objects. Taylor ultimately sought to expand the possibilities of vision by creating new ways of experiencing and imagining space, and his work provides the viewer with an insight into the artist’s thinking and his investigations of perception across several dimensions.

Taylor was born in Springfield, Missouri and studied at the Kansas City Art Institute. He moved to New York in 1970, where he would continue to live and work until his death in 1999. His first solo exhibition took place in 1986 at the Alfred Kren Gallery in New York. His work would go on to be shown in numerous exhibitions in America and Europe, including solo exhibitions at the Kunsthalle Bern (1992) and the Kunstmuseum Luzern (1999), both in Switzerland. A retrospective of Taylor’s drawings was organized posthumously by the Staatliche Graphische Sammlung at the Pinakothek der Moderne, Munich in 2006. His work is found in a number of prominent public collections, including The Museum of Modern Art, New York; the National Gallery of Art, Washington, D.C.; the Museum of Fine Arts, Houston; the Whitney Museum of American Art, New York; Glenstone, Potomac, Maryland; and the Musée National d’Art Moderne, Centre Georges Pompidou, Paris. A retrospective of the artist’s prints opened at the Pinakothek der Moderne, Munich in September 2010, and travelled to the Louisiana Museum of Modern Art, Humlebaek, Denmark in Spring 2011. The Santa Monica Museum of Art, California, presented a focused overview of two bodies of work by the artist, Wire Instruments andPet Stain Removal Devices, in 2011. Most recently, in 2013, the High Museum of Art in Atlanta mounted the exhibition Drawing Instruments: Al Taylor’s Bat Parts and End Cuts.

The Estate of Al Taylor has been represented by David Zwirner since 2007. Since then, Taylor has had three solo exhibitions with the gallery: Al Taylor: Early Work (2008), Al Taylor: Rim Jobs and Sideffects (2010), and Al Taylor: Pass the Peas and Can Studys (2012). In 2014, the gallery will present an exhibition of Taylor’s work at our London space.