Study for Crash Pad. A multi-purpose room with a library in the front building of KW Institute, drawing upon the idea of the 19th century salon as a setting for cultural and political conversations. A preliminary statement of the 8th Berlin Biennale. 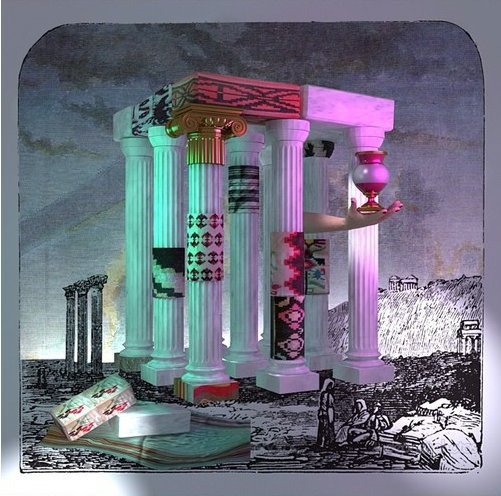 With Crash Pad Angelidakis creates a multi-purpose room with a library in the front building of KW Institute for Contemporary Art, drawing upon the idea of the 19th century salon as a setting for cultural and political conversations. The room is formed by an arrangement of ancient and folkloric rugs handmade in the Greek countryside, displaying a transitional iconography from an Ottoman to a European tradition, together with a set of columns. The carpets and the columns represent the two conflicting systems that modernized Greece in the 19th century: The Europeanized Greek diaspora (educated in Germany, France, and England and influenced by the invention of antiquity there), and the peasant guerrilla fighters under general Theodoros Kolokotronis.

Crash Pad also refers to the first bankruptcy of modern Greece in 1893, which followed soon after liberation, essentially because the Europeanized Greek diaspora tried to keep the folk fighters out. These conflicting systems led to a series of failed governments and economic crises which brought about a predecessor of the International Monetary Fund, which was put in place by France, England, and Germany in order to supervise the debt of Greece.

Crash Pad offers a space for events, discussion and exchange within the 8th Berlin Biennale, as well as a place for contemplation and exchange for the traveling artists arriving at KW: A domesticated ruin and a thank-you note from a Norwegian-Greek architect to the German idea of antiquity.

On occasion of the installation opening on January 25, 2014, there will be a public conversation with Andreas Angelidakis and Juan A. Gaitàn, curator of the 8th Berlin Biennale, at 3 pm.

The Berlin Biennale is organized by KW Institute for Contemporary Art and funded by the Kulturstiftung des Bundes (German Federal Cultural Foundation).