Kick it till it breaks

Kick it till it breaks brings together nine artists who through their practice relate a critical objectivity that partly relies on making the familiar unfamiliar to in turn find a new sense of unstable truth in something that generally goes accepted and unquestioned. 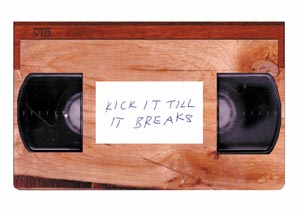 Kick it till it breaks brings together nine artists who through their practice relate a critical objectivity that partly relies on making the familiar unfamiliar to in turn find a new sense of unstable truth in something that generally goes accepted and unquestioned. In doing so the works offer alternative perspectives on ideas/images and objects that have become canonised or part of accepted popular social consensus. In de-valuing common phenomenon and mythologized Å’fact comes the chance to re-consider the stale beliefs and pre-conceptions inherent in an era where ideology and certainty seem impossible.

Darren Phizacklea:
The grey matter has become neon. Possibly representing the ultimately sensationalist and content-less nature of the majority of information on offer, the intricate and temporarily garish sculpture flickers unable to make up its mind whether to function or break.

Seb Pantane:
Detourning already existing imagery, using ink on antique prints, the customised drawings, from the series Sadako!, use late nineteenth century illustrations from art publications to suggest an alternative narrative. The gentle Å’defacing portrays and relates to contemporary Asian horror films as well as perverting the intended function of the original illustration.

Matt ODell:
ODells model depicts the Branch Davidian compound in Waco, Texas, where cult leader David Koresh delivered his sermon to his followers. The sermon (for this exhibition being played through headphones) was broadcast live around the USA before the 51-day siege ended with a gun battle between the Davidians and the FBI. The compound subsequently burnt down killing Koresh and approximately 80 Davidians.

Liam Scully:
'These drawings have been my past time for some time. Like a couch potato I sit in front of the TV and see what shit I can afford to take.'

Bob and Roberta Smith:
'Most artists are cunts. They talk with so much seriousness about their work you would think they worked for the fucking NHS. What has being an artist come to? Hanging out with fucking Janet Street Porter? My paintings have no meaning. If you want to read meaning into them then youre a twat.'

Rory Macbeth:
Id just like to say a big hello to the guys at work, my mum, my girlfriend, and everyone who knows me.

Klaus Thejil Jakobsen:
A cardboard cash machine made with every detail faithfully reconstructed suggests a desire to realise anew the common and familiar objects and machines used daily at thoughtless convenience. Lending a meticulous craftsmanship to the usually mundane furniture of the street the primary use value of the machine is discarded in favour of aesthetic irony.