To negate negation. The Russian group is a platform that unites representatives of various areas of artistic and intellectual life. The current exhibition responds to the living contradiction by presenting a survey of many old and newer artist projects in a specially developed dialectical display. 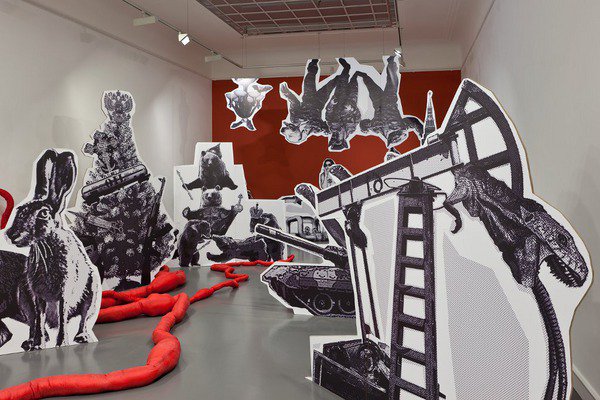 Philosopher Georg Lukács once said that orthodox Marxists should not believe in this or that thesis, nor in the exegesis of a sacred book. On the contrary, orthodoxy refers exclusively to method. By method, Lukács meant dialectics as a means of analyzing and representing the whole of society as a totality of struggling contradictions.

To speak about dialectics makes particular sense at BWA Wrocław. Its architecture confronts the ruin of an old palace with a new modernist intervention, facing us with obvious conflicts between the classics and modernism, between the old functions of exclusive noble privacy and the modern public institution. The current exhibition responds to this living contradiction by presenting a survey of many old and newer Chto Delat projects in a specially developed dialectical display whose main point is to “negate the negation…”

All graduates of socialist schools and universities will remember this negation of negation as the third principle of dialectics, culled from Friedrich Engels Dialectics of Nature. What could this principle mean in art today? Confronted with a simple dumbly positive postulate of an artwork, the viewer reacts with a very basic question: why should I care? It looks like the artists are trying to brainwash me but for what reason? I won't believe it, I'm not that simple; the characters are so conditional, it must be a brechtian device. Why are they constructed in such a way? And why do they still give me aesthetic pleasure? Perhaps there is something beyond this simplicity? It is with such questions that the negation of negation begins.

We invite the visitor to a tour through a show where art works only communicate by calling one another into question, making complex things simple and simple things complex, as the work of negativity turns into the play of its own negation. But make no mistake. Art is never just a self-referential game. It always suggests further implementations and resolutions outside the gallery space in real life. As Mao once wittily remarked, “theory (read also art) is the negation of practice while the opposite of practice is of course non-practice. In turn, only when theory is further negated in practical activity is a higher development of man's knowledge of the world achieved.”

DIALECTICAL PLAY OF OPPOSITES.
ABOUT CHTO DELAT IN THE INSTITUTIONAL FRAMEWORK

Chto Delat have embarked on a quest for a currently attractive, emancipatory potential of leftist ideas. Chto Delat strongly criticize the reality of contemporary political and social life in Russia, art institutions, and Western capitalism. Chto Delat flourish in the international institutional art market, operating in the convenient framework of the capitalist system. Chto Delat embody the dream of engaged Russian art in the Putin era, dreamed of by curators from the West. At the same time they rarely show up in the official salons in Russia. Each of the above statements is true – this is a conclusion one can draw upon a close inspection of the exhibition in Wroclaw, reading the numerous descriptions, theoretical and polemical texts, or studying the performances and documentation of actions published on the collective's website.

“Negation of the negation” is a unique exhibition, as it is the first presentation of contemporary Russian art in the Wrocław gallery Awangarda after the fall of the Berlin Wall and the collapse of the Soviet Union. It is also the first exhibition of the group Chto Delat in Poland, presenting the whole panorama of its activity. As part of the show, we will find all themes characteristic of artistic practice of Chto Delat, including, in particular, references Hegelian and Marxist dialectical struggle of opposites, inevitably driving social change. Already the title “Negation of the negation" contains direct references to the terminology originally borrowed from the idealist dialectic of classical German philosophy, and specifically to one of the three universal laws formulated by Hegel's dialectic – negation of the negation. In turn, individual projects of the collective shown in the exhibition relate to the dialectical principle of testing the reality which involves the disclosure of its existing contradictions, the study of the clash of these contradictions and the resulting changes, that is – in short – to the principle underlying the methodology of Marxism.

At the core of the exhibition lie projects commenting on the current situation, social and political events in various countries (Russia, Serbia, the Netherlands), petrified by allegorical methods and visualized primarily in film productions, the so-called ”Songspiels”. The actors embody various sections of the society, represent various (age, professional, political) groups and their aspirations, interests and visions, as well as the existing opposition between them, building tension and conflict. Both these projects and other documentary and para-documentary recordings reveal interest in “classic” leftist work – the epic theatre of Brecht and Godard's New Wave cinema. Apart from film showings, the arsenal of devices employed by Chto Delat consists of a few simple methods. Institutional space, annexed by the group in various parts of the world, is usually organized in a similar manner – by means of simple elements of stage design, reminiscent of home-made banners or mock-ups, as well as prints, murals, flags, posters and publications. These elements are often accompanied by on-site actions, meetings and discussions. Each of these devices is invariably associated with the language of propaganda and agitation, a message addressed to the widest possible audience. In each case an institution turns into such a propaganda mouthpiece becoming at the same time the (knowing) object of the collective's genuine contempt. Yet the collective declares the aim of protecting the institution against the “economization, and subordination to the populist logic of the culture industry” , only to say: “That is why we believe that right now it would be wrong to refuse to work in any way with cultural and academic institutions despite the fact that the majority of these institutions throughout the world are engaged in the flagrant propaganda of commodity fetishism and servile knowledge. The political propaganda of all other forms of human vocation either provokes the system’s harsh rejection or the system co-opts it into its spectacle. At the same time, however, the system is not homogeneous – it is greedy, stupid, and dependent. Today, this leaves us room to use these institutions to advance and promote our knowledge. We can bring this knowledge to a wide audience without succumbing to its distortion.” Institutions inviting Chto Delat decide to play this game. This is the case also this time. In Wroclaw, the game with the institution takes on another dimension – the game with the potential inherent in the relationship with the audience and with the surrounding reality. Thanks to Chto Delat the monumental windows of the Awangarda gallery, overlooking a busy street become stands. The gallery turns into the audience, and the street turns into a performance. There is a clear reversal of the viewer-institution relationship, ascribed to the building by the very architectural device of unveiling and glazing the top coat of the facade of the historic palace ruined during WWII – and, in this way, opening up its institutional interior to constant public view. The metaphor of game and the play of opposing forces present inside and beyond the institutional framework does not merely serve the purpose of turning the set relationship between an art gallery and the external world inside out, but rather of evoking a critical reflection on the observed reality, seen as a potential that can be offered to the viewer.

What is Chto Delat?
The Russian group Chto Delat is a platform that unites representatives of various areas of artistic and intellectual life: artists, philosophers, writers, activists, and social scientists. The group is guided by the principles of collectivism and self-realization. As described by its members, the core of the group is formed by a team of coordinators who cooperate closely with grassroots workgroups that share the principles of internationalism, feminism, and equality. Their activity represents the entire platform and provides a common context for interpreting their projects. Permanent activists of the collective include: Olga Egorova / Tsaplya (artist, Petersburg), Artiom Magun (philosopher, Petersburg), Nikolai Oleynikov (artist, Moscow), Natalia Pershin / Glucklya (artist, Petersburg), Alexei Penzin (philosopher, Moscow), David Riff (art critic, Moscow), Alexander Skidan (poet, critic, Petersburg), Oxana Timofeeva (philosopher, Moscow), Dmitri Vilnius (artist, Petersburg), and Nina Gasteva (choreographer).