Taking shots is the first exhibition to focus on the large photographic oeuvre of William S. Burroughs. Andy Warhol's extensive but little known 8 x 10" photographs realized from 1976 to 1987. A major new commission for the Gallery's Wall by digital artist Alan Warburton. The unique cinematic style of David Lynch featuring in b/w interiors and exteriors of industrial structures. 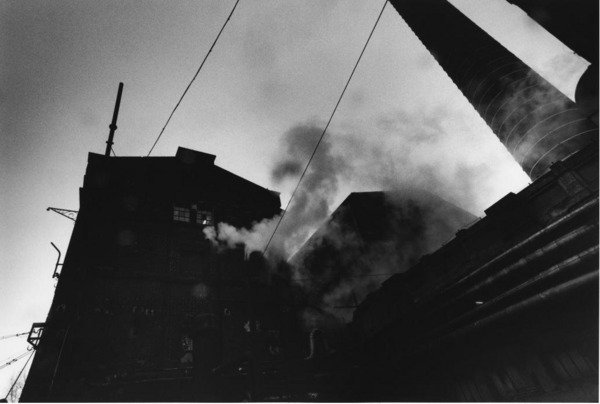 William S. Burroughs (1914-1997) was an influential American novelist, essayist and artist, and a cult icon. Coinciding with the centenary of Burroughs’ birth, Taking shots will be the first major exhibition worldwide to focus on his large photographic oeuvre, offering new and important insights into his artistic and creative processes.

The exhibition will feature over a 100 works, mainly black and white, many rarely or never before seen. These include vintage photographs, collages and assemblages alongside related ephemera such as postcards, magazine and book covers and adverts used in Burroughs’ pieces. Also included in the space is Towers Open Fire (1963), a short experimental film by Antony Balch influenced by Burroughs’ theories of the image. The title, Taking Shots, refers to photography but also to Burroughs’ well-known heroin addiction and his obsession with firearms.

The photographs exhibited were mainly taken between the early 1950s and 70s in locations including London, Paris, New York and Tangier. Burroughs’ images can be loosely organised into categories including self-portraits, street scenes, intimate domestic interiors, assemblages, construction sites, and portraits of fellow writers and artists, like Jack Kerouac, Allen Ginsberg, and Brion Gysin, and friends and lovers.

His photographs have hitherto mainly been used to illustrate critical approaches to his work. Taking Shots repositions them as integral to an understanding of the historical and formal characteristics and concerns of Burroughs’ wider oeuvre. Burroughs used photography partly as a research tool, but also as a medium of aesthetic experimentation. Processed cheaply and treated as disposable items, many of his photographs bear markings and scratches, and most are not titled or dated. The fragmented nature of his photographic oeuvre resists a thematic or chronological layout and is reflective of his nomadic lifestyle and state of mind.

Burroughs was fascinated by, what he believed to be, photography’s ability to disrupt the space-time continuum and to expand the viewer’s perception of the physical world. Using the cut-up technique – visuals cut from different works arranged and shuffled to conceive new connections and meanings between images – Burroughs created complex collages. For him these pieces functioned as a form of time travel, ones in which the camera was used to literally cut pieces from the continuum to then be repositioned and disseminated.

In a 1976 interview with J. E. Rivers, Burroughs discussed his use of photographs, noting: [...] I pay a lot of attention to photographs because of characters. I’ll say, ‘Well, that picture looks something like one of my characters’, and I’ll build up a composite picture of what a character looks like. The exhibition will examine these links and photography’s role in Burroughs’ wider aesthetic practices.

Taking Shots is curated by Patricia Allmer, Chancellor’s Fellow in Art History at the University of Edinburgh, and John Sears, independent literary critic. The exhibition is accompanied by a fully illustrated catalogue, Taking Shots: The Photography of William S. Burroughs, co-published by The Photographers’ Gallery and Prestel.

Warhol is well known for using photographic processes as source material in the service of his canvases, most famously his polaroids. It wasn’t until 1976, when he officially ‘divorced’ his tape recorder in favour of his 35mm camera, that Warhol began taking photographs intensively for their own sake.

The photographs in this exhibition will provide an insight into Warhol’s daily life depicting: people in the streets, parties, uninhabited interiors, cityscapes, signage, still life, consumer products and miscellaneous objects. As in his artworks, formal aspects and patterns in subject matter emerge, showing photography to be at the centre of Warhol’s thinking, looking and making.

Andy Warhol’s fascination with photography began at childhood when he received his first camera at the age of nine and started developing his pictures in his basement. In the 1950s, working as a commercial artist in New York, Warhol witnessed first-hand photography’s increasing popularity in print media. In his diaries he went so far as stating: I told them I didn‘t believe in art, that I believed in photography.

In 1976, at the height of his fame as an artist, Warhol purchased a small point and shoot Minox camera. He was extremely excited by the shrinking camera technology and the freedom it afforded him. From then on Warhol was rarely without a compact camera on his person, often taking more than 36 frames a day. Already an avid observer and recorder, Warhol began compulsively shooting his immediate surroundings. He embraced the ‘shoot now, see later’ nature of 35mm, and chose an average of five images from each film roll to have printed at The Factory by Christopher Makos and later by Terry Miriello.

To demonstrate one of the ways Warhol dealt with this enormous body of images the exhibition will include a selection of Stitched Works, where multiple copies of identical images were sewn together and transformed into formal, structural compositions. Creating over 500 of these works between 1982 and 1987, the ‘stitched’ photographs highlight Warhol’s interest in serial and repeated imagery.

Warhol’s radical use of the image helped pave the way for photography as a form of fine art. Photographs 1976 - 1987 marks Warhol’s adoption of the compact camera, an important development in his career-long endeavour to turn image making into a production line.

This exhibition was made possible thanks to the generous co-operation of PMG Fonds Management AG, Bruno Bischofberger Gallery and Timothy Taylor Gallery.

The Photographers’ Gallery in collaboration with Animate Projects present a major new commission for the Gallery’s Wall by digital artist Alan Warburton.

In September 2013 an open call for proposals was sent out inviting artists to create a new work which considers photography’s relationship to animation, and how screen technologies have altered the ways in which the visual image is made present. The commission was open to UK artists working in photography and moving image and offered £5,000 towards production costs and fees. From over a hundred submissions Spherical Harmonics by Alan Warburton was selected.

For Spherical Harmonics Warburton draws on his background in fine art and commercial visual effects to produce a short experimental animation. The title of the piece refers to mathematical equations applied in CGI software which compute the behaviour and appearance of light within each scene. This is an example of how modern imaging software attempts to mimic the massive complexity of photographic ‘reality’.

In Spherical Harmonics Warburton presents a sequence of surreal episodes activated by and centred around various bodies of light. Inspired by Stanley Kubrick’s 2001: A Space Odyssey, the film hints at a fragmented but elusive narrative which references fetishisation, systems, games, control and memory. The protagonist, Maya, a stock CG figure purchased online, inhabits a generic hotel room, responding to texture, colour and movements which are controlled and transformed by the appearance of each new source of light.

Created especially for the Gallery’s media wall, the film responds to its unique characteristics. Sized at 2.7 x 3m the Wall is comprised of eight high definition screens with a combined resolution of 8 million pixels per frame. With over 7,500 frames Spherical Harmonics features a total of 62 billion pixels created for this project alone.

Alan Warburton said: CGI as a practice and toolset draws on the deepest levels of understanding we have about the physical world. It presents the CGI artist with thousands of configurable settings based on a comprehensive approximation of real world phenomena such as Newtonian physics, light scattering, material properties and atmospheric effects. In Spherical Harmonics I wanted to address this crossover between photography, physics, sculpture and engineering. The film attempts to draw out the poetry of the title - taking scientific code and bending it into a new artistic form.

In addition to the Gallery’s Wall Spherical Harmonics will also be available for viewing via the Animate Projects website www.animateprojects.org

"I love industry. Pipes. I love fluid and smoke. I love man-made things. I like to see people hard at work, and I like to see sludge and man-made waste." David Lynch

Anyone familiar with David Lynch’s (b. 1946, USA) enigmatic visual language will identify similarities between this series of photographs and his iconic films. Featuring black and white interiors and exteriors of industrial structures, the exhibition exudes his unique cinematic style through dark and brooding images.

Shot in various locations including Germany, Poland, New York, New Jersey and England, the works depict the labyrinthine passages, detritus and decay of these man-made structures – haunting cathedrals of a bygone industrial era slowly being taken over by nature.

The exhibition is the first European showcasing of this project and is accompanied by one of Lynch’s sound installations.

David Lynch: The Factory Photographs is curated by Petra Giloy-Hirtz, a curator and author based in Munich, Germany.

A fully illustrated book, David Lynch: The Factory Photographs, published by Prestel, will be available from the Gallery Bookshop.