After a transitional period of taking pictures outdoors and re-visiting early images of friends and family, Fletcher has returned to the familiar construct of his studio wall. 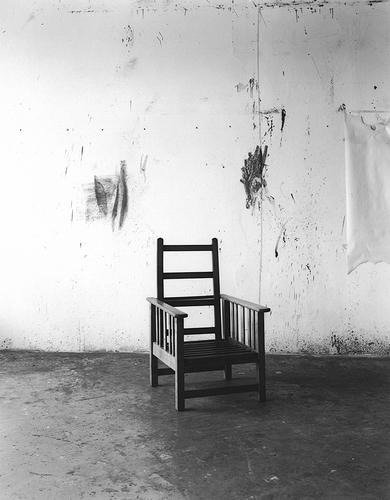 For his seventh solo show at Anton Kern Gallery, English artist Saul Fletcher is presenting a new body of work, thirty photographs all taken inside the artist’s new abode in Berlin, Germany, in 2013. A fifty-six page, fully illustrated catalog entitled 13 will be published in collaboration with Galerie Sabine Knust, Munich for the exhibition.

After a transitional period of taking pictures outdoors and re- visiting early images of friends and family, Fletcher has returned to the familiar construct of his studio wall. Only this time, he has taken the wall with him and reinstated it in a new environment. Fletcher “understands his own wall as a sea captain understands the oceanic temperament” (Dan Fox, Nocturama, 2005/2006). Marks and erasures, rough drawings and signs, pinned to the wall, a variety of delicate found objects, as well as a cast of characters closely connected to the artist are all positioned in front of the wall composing the fine-tuned vocabulary of Fletcher’s photographs. The artist’s own biography may be the initial inspiration for these images but it is their universal quality that transforms them into documents of poetry.

Eyes dance imaginative reels across their surface crust, and the walls absorb blows of frustration when events outside their cubic embrace have not been sympathetic to us. They are immovably resolute sentinels, crutches that steady when we wish to stay still. A wall looks flat only to those who are strangers to it. (Dan Fox, Nocturama, 2005/2006)

In addition to numerous solo gallery exhibitions in Europe and New York, Fletcher’s work was most recently th featured in the 30 Sãn Paulo Biennial, Sãn Paulo, Brazil, and Les Rencontres d'Arles, Photo Festival Arles, Arles, France (both 2012), and in group shows at the Center for Curatorial Studies Bard (2011, 2010, 2009 and 2008), the Rose Art Museum (2009), the Miami Art Museum (2008), the 4th Berlin Biennial for Contemporary Art (2006), and the Carnegie International at the Carnegie Museum of Art, Pittsburgh (2004).