The Museum and Architecture Collection. An installation organized in collaboration with Herzog & de Meuron features models, diagrams, renderings and projections that highlight the project's core features, including a dramatic "found space". 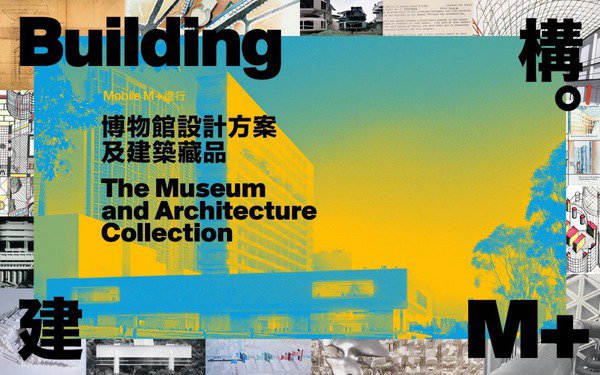 The West Kowloon Cultural District Authority and M+, Hong Kong's new museum for visual culture—encompassing 20th- and 21st-century art, design and architecture, and moving image—are pleased to announce Building M+: The Museum and Architecture Collection. The fifth in the museum's Mobile M+ exhibition series leading up to the completion of the M+ building in late 2017, Building M+ will be a milestone exhibition presenting a more detailed look at the design of the M+ building, by renowned Swiss architectural practice Herzog & de Meuron with Hong Kong-based TFP Farrells and Ove Arup & Partners HK—alongside a preview of the museum's growing architecture collection, the first of its kind in Asia.

The M+ Building
Starting with an overview of the processes by which its design was selected by an international jury in 2013—including a presentation of the other shortlisted design proposals by Kazuyo Sejima + Ryue Nishizawa/SANAA; Renzo Piano Building Workshop; Shigeru Ban Architects + Thomas Chow Architects; SNØHETTA; and Toyo Ito & Associates, Architects + Benoy Limited—the exhibition will reveal the ongoing development of the 60,000-square-metre M+ building as it progresses towards its scheduled completion in late 2017.

An installation organized in collaboration with Herzog & de Meuron will feature models, diagrams, renderings and projections that highlight the project's core features, including a dramatic "found space," carved from around the existing Airport Express train tunnel running beneath the site, which will anchor the building while affording unique opportunities for large-scale installations; a horizontal podium providing a diverse array of exhibition and display spaces around a central plaza which includes a space dedicated to contemporary ink art, topped by a large public roof terrace; and a slender vertical "tower" rising above the centre of the podium, where a research centre and offices will be located on the lower levels, with a sky garden above and restaurants offering views out over Victoria Harbour and Hong Kong Island. The tower's harbour-facing façade provides the potential to display digital and moving-image works.

The M+ Architecture Collection
In its first ten months of collecting architecture, M+ has acquired hundreds of architectural models, drawings, photographs, installations, videos and other materials that help document, uncover and interpret the 20th- and 21st-century global narratives of architecture from the perspectives of Hong Kong, China and Asia. Building M+ will also present the inaugural showcase of this growing collection—the first of its kind in Asia, presenting over 100 works and materials, many previously unseen, by more than 35 architects, firms and artists from Hong Kong, China, Asia and beyond, dating from the 1920s until now. Together, they provide a snapshot of the museum's groundbreaking approach to collecting, understanding, and thinking about architecture.

In keeping with M+'s multidisciplinary nature, these will be joined by resonant works from the museum's visual art holdings, including pieces by Cao Fei, Andreas Gursky, Aernout Mik and Stanley Wong aka anothermountainman.

Dr Lars Nittve, Executive Director, M+, said, "This exhibition is a milestone opportunity to bring the remarkable design of M+ by the winning architect team to the public, as well as offer a glimpse into the work of our curators in building one of the most important collections of architecture and design worldwide."

Building M+: The Museum and Architecture Collection is curated by Aric Chen, Curator, Design and Architecture, with Shirley Surya, Assistant Curator. The exhibition design is by SKEW Collaborative, with graphics by Project Projects.