Fischer's machines turn their purpose into its opposite - instead of offering solutions, they pose questions. Dancing, leaping and singing, they propel objects out of their day-to-day, humdrum routine. Kuttner's drawings have rather a status and value of their own. 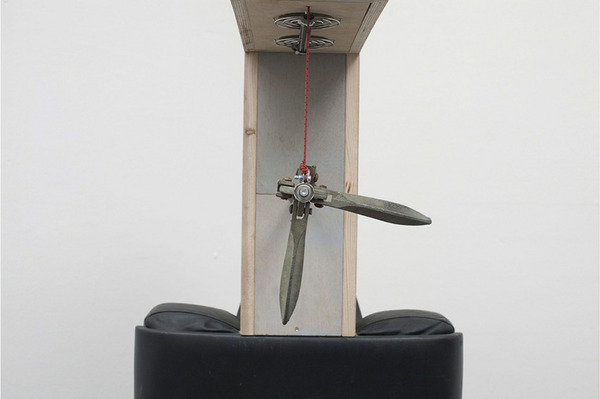 Andreas Fischer the Head of the Clock, Johann König, Berlin, 2014

It is with great pleasure that Johann König, Berlin presents Andreas Fischer’s first solo exhibition at the gallery.

Andreas Fischer’s machines are wonderful contraptions. In contrast to run-of-the-mill machines, which are destined to serve a practical end and facilitate everyday life, Fischer’s machines turn their purpose into its opposite – instead of offering solutions, they pose questions. Dancing, leaping and singing, they propel objects out of their day-to-day, humdrum routine. Now they turn round and round in circles, now they speak to us, and not infrequently they repeat themselves, compulsively, again and again. Often, they fail; at times they don’t react at all – it is only concealed motion sensors that turn them into unexpectedly living creatures. Their verbal wit often reveals itself to be profound seriousness.

In the title of his latest exhibition in the Museum Ludwig, Cologne, “Your Time Is My Rolex”, Fischer admitted in all irony that time was his capital. For his works, time is fundamental: after all, not only creating them but also viewing and appreciating them require time. Only in the course of time is it possible to narrate the “inside stories” which Fischer is concerned with – one’s own finitude, one’s own inadequacy.

This, his first exhibition at Johann König Berlin, refers to time in its very title: the “Head of the Clock”, with its connotations of the “face of the grandfather clock”, its “brainbox” as it were, can only refer to the artist himself, who plays with the cogs and wheels and so shifts and displaces time. The clockwork mechanism can thus be seen as a symbol of Fischer’s art. Visible and concealed cogs are the engine of his electro-mechanical machinery; objects swinging to and fro, pendulum-like, give the rhythm – “tick-tock”.

Specially for the current exhibition the artist has created, among other things, two new machines entitled “Spezi” und “Richter”. In the work “Spezi” [‘Buddy’], the protagonists are two cleaning appliances. One of them, in its former life, was destined to gather up dry dust, the other to wipe with a damp cloth – the ideal household combination. And so a voice declares from the wings, “The two of us are something really special”, “Absolutely, utterly special”, and allows no trace of doubt to creep in: “After all, it wasn’t our idea”. What begins as a whispered conversation between lovers degrades into aggressive demands: “That’s the only way of looking at it”, and, even more forcibly, “Come on, just admit it!” Yet the “artificial wiping limb” and the “artificial vacuuming limb” are linked by a home-made hinge-like mechanism. The “wiping limb” swings, pendulum-like, to and fro, takes a breather and sets off again. In Southern German dialect, the word ‘Spezi’ denotes a very close friend – although it is a term both affectionate and brusque at one and the same time.

In the work “Richter” [‘Judge’] the chair for a child’s desk hangs upside down from the ceiling, while the voice in the background describes the way of all things, underscored by a fear-instilling “sound collage”: “The upright, the uprighted, the upright gait, up-right, the righted sight of the righteous, the just-right way of sighting the world ...”. While ventilators continuously produce wind, a vacuum cleaner suddenly switches itself on, turning now to the one, now to the other side, struggling for air, robbing the beholder of breath. Be it upright, ad-justed or just, this work is without doubt a political work about power and justice.

Andreas Fischer’s machines embody the very opposite of perfection, perhaps the opposite of the future. They do not attempt to anticipate things to come, but to bring back to life things past and passé, the worn-out, the frail. More human than this, machines can hardly be.
Text: Paola Malavassi

Andreas Fischer (*1972) lives and works in Dusseldorf where he did his masters as a student of Georg Herold at the Kunstakademie in 2003. Since then he had solo exhibitions at Museum Ludwig, Cologne (2012); Galerie Vera Gliem, Cologne (2011); Kunstverein Bonn (2009) and Art Cologne (2007). His works have been presented at group exhibitions at Kunstverein Hamburg (2013); Martha Herford, Germany (2012); Museum Ludwig, Cologne (2010); Kunst im Tunnel (KIT), Dusseldorf (2007) and Ars Electronica, Linz, Austria (2005). Fischer received grants and fellowships by the Kunststiftung NRW, the Kunstfond Bonn, the Peill-Stiftung Düren and a residency at Schloss Ringenberg. His works are part of institutional collections such as “Kunst aus NRW”, Kornelimünster, Aachen and Museum Ludwig, Cologne.

With „Was sollten Sie zuerst sehen?“ [What Are You Supposed to See First?] Johann König, Berlin presents for the first time an exhibition devoted exclusively to the artist’s works on paper, thus attempting to reveal the forerunners and origins of the neon-coloured painting characteristic of Kuttner.

The exhibition’s title “Was sollten Sie zuerst sehen?” can be found, barely legible, in the early work “A-Z lala”, the background of which is a page from a guidebook to the USA which Kuttner has covered with musical notations. Produced in 1962, the work underscores Kuttner’s interest in music, tonality, rhythm, harmonies and dissonances, an interest that can be found also in his later paintings.

Taken apart from the specific context of this work, the question ‘What should we see first?’ has reference to Kuttner’s overall oeuvre. It implies a hierarchy, the idea that certain things have to be seen before others – here, the drawings before the fluorescent canvas works produced from 1962 on, which were most recently on display in 2013 at the heart of the broad-based retrospective in the Villa Merkel, Esslingen and the Langen Foundation, Neuss.

The lines of Kuttner’s very early drawings such as “Dresden” (1959) or “Liegende” [Reclining Female Form] (1960) from his Dresden Academy years adumbrate landscape and body alike, revealing at the same time his interest in an untrammeled dynamism that in later works takes on a life of its own. The artist’s drawings, however, are less a prior stage to, or preparation for, the paintings to come but have rather a status and value of their own. The staccato of the pencil, the immediate juxtaposing of nervous pencil lines to form energy-laden structures or the gestural swirling turbulences on some sheets – these are anticipations of the subsequent so-termed ‘automobility’ in Kuttner’s ‘kinetic paintings’ done with luminous paints.

The methodical construction of a rigorously designed but playfully executed grid pattern can be found likewise in Kuttner’s drawings. These works were created at almost exactly the same time as Kuttner made his discovery of glowing, fluorescent colours, with which he transferred the motif to large-scale canvases where it became a flickering, shimmering structure. In this context, Kuttner makes a radical change of direction, henceforth continuing in colour those features that had long marked his works on paper.

In addition, the exhibition displays for the first time in full a series of photographic works. Movement and structure are here rendered by different means but with equal radicality, Kuttner painting a lozenge pattern in black on a naked female body and then photographing it in a variety of poses: overlapping forms, distortions and the illusion of spatial depth are now no longer the result of painterly illusion and an optical construct but are in actual fact the result of the movements of a human body.

Manfred Kuttner (1937, Greiz/Thüringen – 2007, Erkrath bei Düsseldorf) first studied at the Kunstakademie in Dresden, then from 1961 at the Düsseldorfer Kunstakademie as a student of Karl Otto Goetz alongside Gerhard Richter, Sigmar Polke and Konrad Lueg. In 1963 the four artists organized the first exhibition of German Pop Art. From 1961 to 1964 Manfred Kuttner accomplished an oeuvre with a form language of his own in his paintings, drawings and sculptures. Kuttner suspended his career as an artist in 1965. Together with Thomas Scheibitz and Anselm Reyle, Kuttner was represented in “The Artist’s Dining Room” at Tate Modern, London (2007), followed by a solo exhibition at Westlondonprojects (2008) and at Johann König, Berlin (2010). In 2013 his first retrospective was presented at Villa Merkel, Esslingen and Langen Foundation, Neuss, Germany. Kuttner’s work was also shown at various group exhibitions e.g. at the Museum für Konkrete Kunst, Ingolstadt, Germany (2013) or at “Living with Pop” at the Kunsthalle Düsseldorf (2013) which will travel to the Artist Space, New York in 2014.