The exhibition urges the visitor to experience the place's opening up to other spaces and visions of reality through the work of 17 artists of different generations and cultural background. As an optical phenomenon it suggests changes in perspective, dissociations, movements, reflections and diffractions in space. 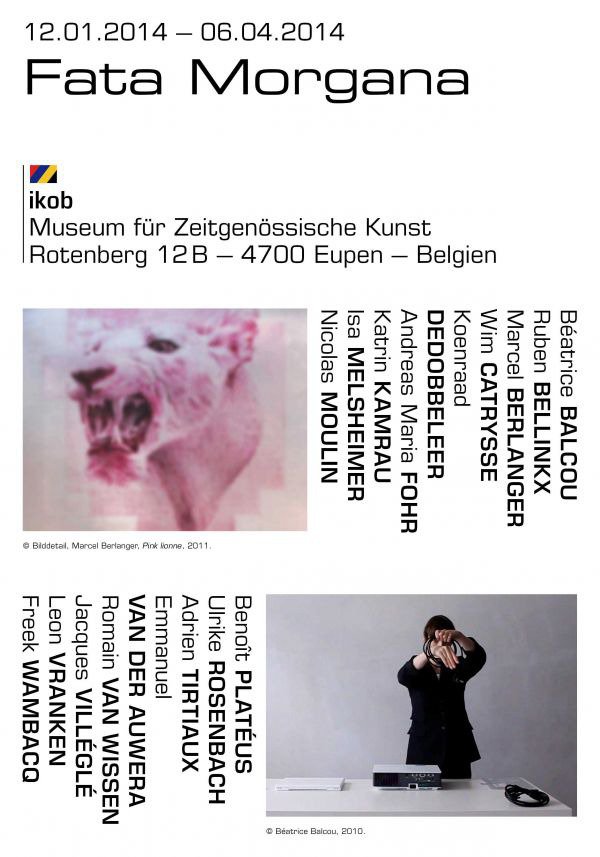 On the occasion of its inaugural exhibition which opens the season 2014, the ikob combines gaps and diffractions and turns into a place of joined mirages, an interlacing of seemingly incompatible spaces and imaginations. Based on the observation of contemporary space and its current fragmentation, Fata Morgana urges the visitor to experience the place's opening up to other spaces and visions of reality through the work of 17 artists of different generations and cultural background. As an optical phenomenon that surfaces from the interaction of light and the atmosphere, a fata morgana suggests changes in perspective, dissociations, movements, reflections and diffractions in space. What appears “here and now” is a series of spaces coming from elsewhere and belonging to another reality, that form a doorstep to our own reality – disclosing at the same time the latter’s heterogeneity.

As a paradigm of imagination, the exhibition can be considered an open metaphor of experiencing borders and, by extension, of Contemporary art as such – drawing on its ground, miscellaneous range of forms and variations, it sways between the poetics of these “spaces of otherness” and a reflection on the shaky stability of what we commonly call reality, in the age of the virtual, the global and the technological ebbs and flows. The displayed works constitute self- dependent spaces that coexist and confront themselves on the marked ground of the exhibition trail, each one of them resonating in the vast field of fata morganas.

A disturbing experience not to be missed, whose echo runs throughout the programme of 2014 in the form of several duo-exhibitions. Constantly focused on the topic of the “Fata Morgana”, the ikob will thus become a place of troubling and visionary exhibitions, where our experience of reality repeatedly sways into some other dimensions coming from elsewhere...

Vernissage: 12.01.2014 – 14.00
Performance by Béatrice Balcou : from 14.00 on
This performance will be repeated in regular intervals, each time for a smaller group of visitors.
Conceived as an act of resistance, this intimate performance will break the stream of the inauguration. Through this radical split, it deviates everyone’s attention by plunging the spectator into another state of perception.

Catalogue: A publication of 72 pages accompanies the exhibition, developing in its form and content the question made by Fata Morgana and the exhibited works to our understanding of contemporary space (release on 15 February). Preview on 12 January.