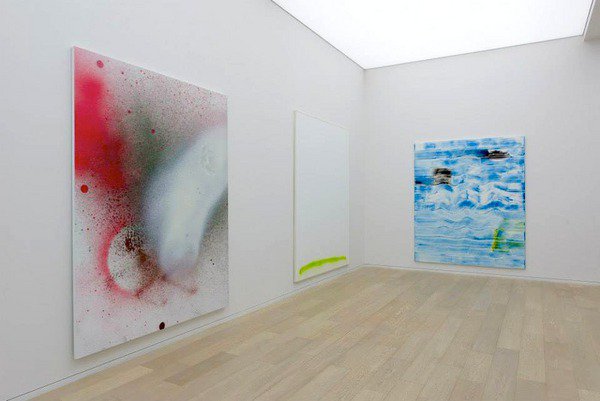 Simon Lee Gallery Hong Kong is proud to present Walk the Line, an exhibition of new and recent work by eight gallery artists, who, across disparate practices, share an interest in conceptual abstraction. The exhibition focuses on their process-oriented approach to conceiving and making work. This frequently involves the translation, mutation and reconstitution of an image from one medium or form into another. The emphasis on repetition and alteration as a means of alienating an object or image from its origin is part of a strategy which Hugh Scott-Douglas suggests ‘pushes materiality until the form collapses the whole’.

Employing techniques that are on one hand ‘analogue’ and on the other ‘frictionless’, Jeff Elrod is concerned with the relationship between manual and digital mark-making. Elrod’s paintings grow from within the confines of a computer screen as free-hand drawings composed with a mouse and graphics software. These drawings are then drastically enlarged and either digitally printed directly onto the canvas, or projected onto the canvas, marked out with tape and painted or printed over. The tangible process of taping the canvas contrasts with the rapid, automatic movements achieved with the mouse. Once the tape is removed, sometimes partially, the relationship between figure and ground becomes ambiguous. Informed by the trajectory of late twentieth century abstraction and the emergence of software and printing technology, Elrod’s paintings create visual landscapes that are constantly in flux, characterised by a slippage between flatness and an illusory depth.

Matias Faldbakken’s interest in abstraction is as a technique for negation as well as an aesthetic proposition. Through acts of cancellation, erasure, vandalism and reduction, Faldbakken de-locates objects from their conventional environment, preventing them from fulfilling their intended purpose, and thus rendering them physically and metaphorically obsolete. Untitled (Sack #7), 2013: a framed canvas sack, painted on its back. It is only that part of the paint that bleeds through the fibers of the sacking that is visible, suggesting that the work reveals and withholds its motifs simultaneously.

Bernard Frize tackles abstract painting self-reflexively. An interest in theory, process and formalism are communicated through his painting formulations, the particular handling of the paint and the resulting image: predetermining the marks he will make, the finished painting exists as the record and the result of his inquiry. Palter, 2012, implies fluidity with seemingly endless horizontal brush strokes, and the liquidity and quantity of paint upon the canvas. The continual, flowing qualities embodied in this aesthetic are characteristic of Frize’s practice in which his tools, materials and techniques govern the motif or pattern. Painting is not the means to reflect feeling or emotion but rather an expression in itself.

Working across a range of scales, David Ostrowski employs oil and lacquer alongside materials found in his studio. His work is characterized by the relationship between form and content: large areas of unpainted canvas vie with collaged paper, strips of wood, tape or newspaper, and/or lines and blocks of sprayed paint. Colour is not guaranteed; when used, it is applied sparingly and often in a single tone. Undermining notions of composition, style and expression, Ostrowski’s works are stripped of subject matter, yet instate an unforeseeable beauty, found most readily in what the artist terms, ‘mistakes’. Titles such as Musik ist Scheisse make reference to the popular soundtracks to which he works. Sitting between mark-making and erasure and appearing to be unplanned, his works propose an analysis of the act of painting itself.

Hugh Scott-Douglas’ approach is organic and absorptive; he recycles, reproduces and re-develops materials with the expectation that his work will construct itself without waste. A continuation of the “Chopped Bills” and “Torn Cheques” series, the work in this exhibition looks toward the economics of everyday American life as a basis for abstraction, digitally appropriating the small ink stamps found on circulating US one-hundred dollar bills. These are scanned, enlarged and presented as a dye sublimation print surrounded by four satellite laser cuts on linen developed from vector files from earlier cyanotypes. At this unusual scale, the fractured portions of stamps take on the appearance of painterly abstraction.

Creating a world in which the material and the abstract are inextricable, Christopher Wool’s practice addresses the complexities of painting and the qualities of paint itself. He pushes the medium forward continually through a multitude of techniques and methods, including spray paint, silkscreen, and hand painting. Wool breaks order through repetition and layering, recurring motifs and the reproduction of errors suggest the breakdown of a structure that once existed. Reduction and erasure exist alongside slips and misalignments, manifesting a tension between depth and flatness, where the material result fluctuates between representations of marks and simply marks themselves.

Toby Ziegler’s practice is deeply rooted in art historical reference, which acts as a thematic or visual undertone to his work. Archaeologists' grainy photographs and low resolution jpegs of Old Master paintings serve as sources. These images undergo a process of digital manipulation resulting in the loss of pictorial information, giving way to new abstract forms. Ultimately, Ziegler’s paintings both occupy and explore the field between formal composition and its collapse, where shapes and patterns are disturbed by gestural smudges and sprays.

The re-imagining, quotation and appropriation of languages and structures drawn from the histories of modernism is a central and recurring strand of Heimo Zobernig’s work of the past 25 years. His critical engagement with ideas of minimalism, abstraction and constructivism add to the dynamic nature of his work; the appropriation of various art histories even more so. Untitled, 2013, belongs to a series of works that reference a group of paintings by Picasso. This citation is loose and conceptual, a free interpretation combining Zobernig’s own characteristic painterly language. It acknowledges the materiality of its substance and the traces of its process.