An exhibition that once again presents art as an amplifier of sensibilities and places the focus firmly on the individual and society. All works comment on aspects that we associate with Orwell's novel. By Richard Artschwager, Luigi Ghirri, Robert Mapplethorpe, Rita McBride, Harald F. Muller, Matt Mullican, Paloma Varga Weisz and Remy Zaugg. 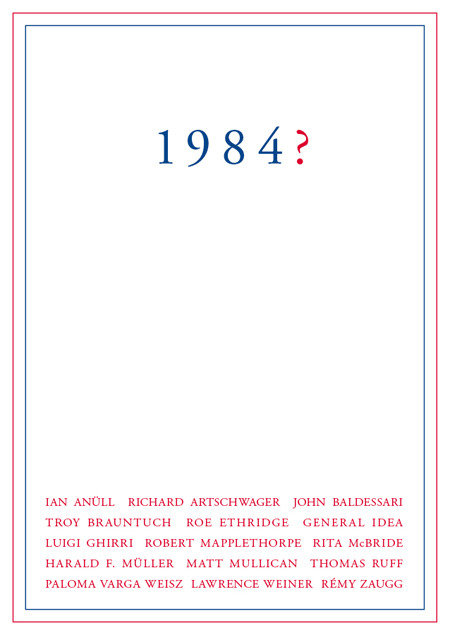 1984 turns thirty, and, with that, reaches an age of maturity and responsibility. The themes addressed by George Orwell in his novel, first published in 1949, are now more topical than ever. Recently, all that we associate with the concepts of liberty, equality and fraternity has come under considerable pressure. Against this backdrop, we have come up with an exhibition that once again presents art as an amplifier of sensibilities and places the focus firmly on the individual and society.

The title 1984? questions the exhibition itself. The date is likely to trigger different personal associations. However, most people will probably be reminded of the book and of the ever-watchful eye of Big Brother – conjuring what was at the time a prescient, but almost fantastical surveillance system. Today, that fantasy has become reality. We are constantly monitored in almost all that we do, in the interests of so-called “security”. And, as though that were not enough, we even volunteer personal information. Just who knows what is becoming increasingly unclear. Our electronic communications show where we are and who we are, and our media positively demand our attention and insist that we engage with them.

The title of the exhibition is also intended as a question addressing what has happened in the intervening time and how our social and political self-image has changed. The selected works were all created in the period between 1984 and the present day. All of them comment on aspects that we associate with Orwell’s novel. In particular, they all address dubious promises of happiness - from John Baldessari, whose canvases combine haute cuisine with reports of violence (Morsels and Snippets: Smoked White Corn Velute, 2013) to Lawrence Weiner’s use of the Marxist slogan EACH TO THEIR NEEDS EACH TO THEIR ABILITIES (1996) and Troy Brauntuch’s 2011 image of a US Army dog traumatised by war undergoing therapy in Untitled (Dog in Water), while Ian Anüll’s Burgers (1981) shows McDonald’s packaging with a rather unexpected content.

Just as Orwell’s novel bears witness to the author’s own sociopolitical views, so too do the works in the exhibition clearly display the stance of the artists towards the individual. The artists’ collective General Idea takes a tongue-in-cheek look at various attitudes towards AIDS in their role-reversing 1992 work Playing Doctors. Another work by the same collective – Mondo Cane Kama Sutra (Distressed) #16 , 1983/1988 – features three poodles connected to their now iconic 1984 Miss General Idea Pavilion project as a direct reference to the supposed entertainment value of television and the role of the artist (also featured in their widely available 1984 video Shut the Fuck Up). Two photographs from Thomas Ruff’s 1992 night series, in typical phosphorescent green, taken with a camera that amplifies the available light, address the issue of observation itself. And in 2012 Roe Ethridge photographed an asylum seeker in Zurich (April 22, 2012) who had arrived in the promising “western world” only to stare into a rootless future.

With the exhibition 1984? we wish to draw attention once more to the fact that the artists represented by this gallery have an agenda: reinforcing a sense of self in the here and now, even in times when that is under threat by the very opposite.

The exhibition is presented in the Gallery and in the Showroom at Rämistrasse 35.