Against the backgrouned of timeless and current discourses on copyright and the freedom of art, this exhibition project seeks to offer an insight into contemporary artistic positions that link methods of creative appropriation or referentiality with socio-political statements or explicitly to use them as instruments. 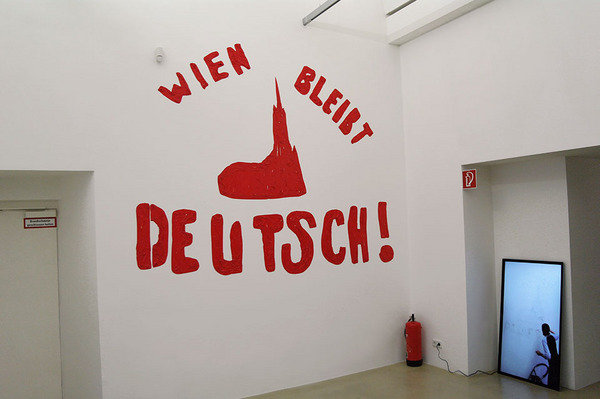 Forms of artistic appropriation, adaptation and referentiality are the themes of the exhibition Copie Non Conforme, curated by Amina Handke, which opens in the Kunstraum Niederoesterreich on 16 January 2014. The title paraphrases that of a film by Abbas Kiarostami, Copie conforme, which deals with the question of original and copy both in art and life.
In the choice of contributions Handke concentrates on time-based media such as video and photography, but also on dance performance and performance, as the question of the original, the première, is already inherent in these media. Above all in the media of film and video, appropriation in the form of remakes or found footage is an artistic method.

Dara Birnbaum’s Technology/Transformation: Wonder Woman works with images from the 1970s TV series WonderWoman. In short sequences she arranges metamorphosing scenes marked by an explosion one after another and thereby places the simple technological standard of TV production alongside the profanity of the content. F iona R ukschcio shows the documentary of her video work Retaped Rape, in which she refilms Yoko Ono and John Lennon’s 1969 film Rape in the original London locations. Here the artist takes the place of the two pursuers behind the camera; the woman being pursued, the victim, is omitted. In Matt und Schlapp wie Schnee [Dull and Washed-Out as Snow] Stefanie S eibold pursues the omissions of art history. Analysing the works of Gina Pane, she shows in particular the omissions of white, male and heterosexually determined art history.

Annja Krautgasser provided seven young people from the “Villaggio Attrezzato” Roma camp in Rome with HD video cameras for a series of interviews; overnight, off their own bat the youths shot a remake of the gang thriller Romanzo Criminale, as it were as an illustration of their desires and conceptions of a life outside the camp.
The illustration of the person however, specifically the portrait, is identity-forming per se, it has a connection to the original. When M arion Porten and J amika Ajalon reconstruct the famous photograph of Warhol and Basquiat boxing, they are concerned with paraphrasing the artist as an icon but also the traditional gender roles. The portrait as an identity-forming medium also plays a role with Peer S ievers; in an interplay of reality and appearance, his haptically appealing textile works and temporary sculptures create fictional identities of personalities from the cultural sector.

In Lovely Andrea, on the other hand, Hito S teyerl pursues her own identity, by going in search of the photographer who photographed her for a bondage magazine when she was young. It is an attempt to reappropriate her own image and thus part of her biography. For the Senegalese M ara N iang and the Cameroonian S imon I nou their own biography also plays a role in their artistic activity: as part of an anti-racism campaign they have designed a new logo for the Vorarlberg Mohren beer, namely No Mohr. M arko Lulić, who grew up in Austria and Croatia, translates the memorial to victims of the concentration camp in Jasenovac into dance, its monumental massiveness into fleetingness, transience. For Wien, Deutschland Lena Lapschina transfers a political statement found in public space in the form of graffiti into a publicly accessible space for art.

Last year the artists group S tatt Wien started an appropriation action in order to speak out against the law banning begging and to highlight the fact that personal financial donations could be increased enormously by means of authorisation. In a temporary appropriation of authority they appointed a person responsible for begging and, equipped with jackets with the municipal crest, an ORF (the state broadcaster) microphone and faked statements by the mayor, they filmed the behaviour of passers-by faced with actors as beggars.

For Amina Handke the starting content for the exhibition Copie Non Comforme was her work Appropriated Beggars on the approach to beggars. In the video work she places sequences of “genuine” beggars and performed scenes alongside one another, and among other things goes into the question of how authentically poverty has to be portrayed in order to be “rewarded”. Is the authenticity of the portrayal more relevant than the authenticity of the need? Handke’s work is based on the video Beggars by Kutlug Ataman; it is a homage to the artist and at the same time questions the meaning of copyright in art today.

One of the performers in Appropriated Beggars is Anat S tainberg. On the opening evening she will translate the individual works into performance and as it were temporarily take on the role of the art mediator.

A catalogue will be published to accompany the exhibition.