Ratcliff's process is always appropriative: he gathers visuals (often drawings or texts) from a wide variety of media, constructs large hand-made stencils and then spray-paints the collaged images onto canvases. Brandes's black and white photographs are fever dreams: the familiar becomes foreign, the quotidian surreal. They explore the uncanny through unexpected juxtapositions of ordinary ephemera - people, animals and things. 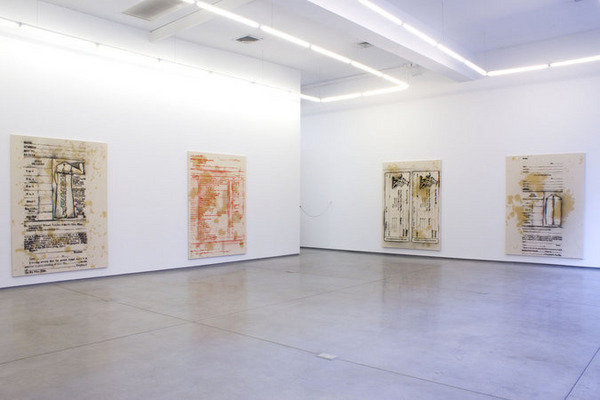 Team (gallery, inc.) is pleased to announce a solo show of new work by Los Angeles-based painter David Ratcliff. Entitled Klan Paintings, the exhibition will run from 19 January through 02 March 2014. Team is located at 47 Wooster Street, between Grand and Broome. Concurrently, our 83 Grand Street space will house a one-person show by the German photographer Carina Brandes.

David Ratcliff's process is always appropriative: he gathers visuals (often drawings or texts) from a wide variety of media, constructs large hand-made stencils and then spray-paints the collaged images onto canvases. In his latest body of paintings, the artist turns his attention exclusively to the Ku Klux Klan. These works take as both their form and their subject the official documents of the organization: incident reports, order forms, meeting minutes, etc.

These paintings appear innocent upon first glance, disgusing under their quotidian bureaucracy the myopic world-view of a violent, racist organization. They feature a kind of fantasy language -- the consistent replacement of the letter "C" with "K," for example -- and are totally divorced from commonly-held contemporary worldviews. These pieces expose the ways belief systems can relate to fiction and constructed realities, but do not suggest any emotional or political agenda whatsoever. Instead, Ratcliff uses this difficult subject matter to explore the ways in which paintings can affect an audience.

The exhibition is streamlined, both visually and in its subject matter, precluding any excess content or distraction. The paintings share a common scale of 84 by 62 inches, while the color palettes are limited, individual works using only a single shade of paint. The backgrounds consist of raw canvas covered in yellow grease stains. These oily blotches seem familiar, but whether they recall the discarded wax paper of a fast-food hamburger, or actionist paintings, or something else altogether cannot be said.

These paintings exist in the wake Philip Guston's portrayals of Klansmen. Both consider issues with the language of paint and the ways in which a painting can and cannot serve as a mirror. Guston's works, however, appear to have a gentle regard for their Klan subjects, implicating their viewers as similarly ugly and flawed. Ratcliff's works lack any such warmth. Largely avoiding pictorial representation, they appear abstract and systematic, closer in appearance to a form received at the doctor's office or DMV than to traditional paintings.

These are history paintings, in the literal sense that they recreate actual historical documents. They are statements of facts, providing information rather than adopting a particular stance. In this regard, they take a queue from Gerhard Richter's October 18, 1977, his cycle of painterly reproductions of photographs taken of the extreme leftist Red Army Faction after their arrest. Like the RAF works, the Klan paintings avoid censuring or supporting their subjects, leaving any such judgment entirely to the viewer.

This is the artist's fifth solo show at Team.

Team (gallery, inc.) is pleased to announce a solo show of new work by Carina Brandes. Entitled Willkommen, the exhibition will run from 19 January through 16 February 2014. Team is located at 83 Grand Street, between Wooster and Greene, on the ground floor. Concurrently, our 47 Wooster Street space will house a one-person show by Los Angeles-based painter David Ratcliff.

Carina Brandes’s black and white photographs are fever dreams: the familiar becomes foreign, the quotidian surreal. They explore the uncanny through unexpected juxtapositions of ordinary ephemera -- people, animals and things. The images are neither documents of the real nor subjective creations, occupying instead a strange in-between of truth and fiction. She frequently takes herself as subject, often with other women similar to her in appearance. The actors are present but anonymous: they appear in the nude, faces at least partially shrouded by shadow or long, blonde hair, each of them a double for the artist. The bucolic settings are empty and deliberately un-iconic, almost as though, without these pictures, they might not exist at all. The artist’s mise-en-scenes, captured using the camera’s timer function, strike a balance of delicate orchestration and the unanticipated, creating a powerful sense of the Unheimlich.

These deeply atmospheric photos capture highly specific moments without offering any narrative clarity. They produce a powerful tension by suggesting a discernable story while never deigning to tell one. Blur and suggested movement endow them with a cinematic quality. Like Cindy Sherman’s Untitled Film Stills, these images present the viewer with a world that is artificial and ultimately unavailable. However, where Sherman evokes a bygone era of Hollywood glamor, Brandes’s visual vocabulary comes closer to B-horror films and home movies. The actors seem to exist solely for the camera’s eye, while simultaneously appearing unaware of it. The self-timer allows the photos to act as records of performers unembarrassed by an audience. In this aspect, they are reminiscent of the self-documentary work of Francesca Woodman and Bruce Nauman.

Brandes ties her own artistic practice to that of magical ritual, with her actors’ choreographed but bizarre positions recalling pagan rites, while the prevalence of water and other liquids as motifs suggest alchemy. Each figure appears as a ghostly double; even the photographic representation of Brandes herself acts as the artist’s doppelgänger. The images capture moments of transformation, while also enacting transformation themselves.

The forms in the photographs immediately read as live human bodies; however, because of their hidden faces and physical similarity, they also appear strangely formal and impersonal. In one photo, a line of four women lie on their backs, the tops of their heads toward the camera, their legs in the air to support a fifth outstretched body. The figures become sculptural: their pale skin turns to porcelain or marble against the black background, and the strangeness of the subject matter is all but eclipsed by the elegance of its physicality.

These photographs consider the female body as an artistic subject. One image shows the artist nude but covered in mud or dark paint, suspended mid-jump. Articles of striped and monochrome clothing hung in a circle behind her recall such divergent forms as minimalist painting and punk. She is forthcoming with her body while managing to remain hidden -- the application of a paint-like material directly to her body serves to highlight representational art’s tendency to simultaneously display and obscure a woman’s person.

Brandes has been the subject of monographic exhibitions both in the United States and Europe. Her New York exhibition comes directly after Welcome, a sister-show at BQ Gallery in Berlin.

This is the artist’s first show at Team.