The Third Act contemplates aspects of contemporary aging, an increasingly central issue as the additional thirty years that have been added to human life expectancy over the last century create changes of many kinds. The exhibit features thought provoking artworks by nine artists who address these issues with sensitivity in a wide variety of media, along with an educational area. 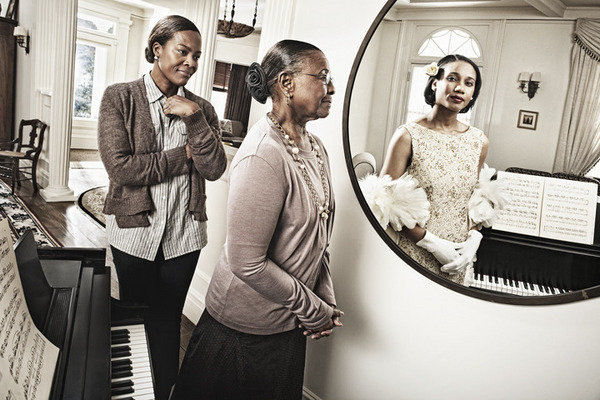 Athens, GA, USA – December 1, 2013 – The Third Act, an exhibit curated by ATHICA Director Emeritus Lizzie Zucker Saltz, contemplates aspects of contemporary aging, an increasingly central issue as the additional thirty years that have been added to human life expectancy over the last century create changes of many kinds. The exhibit features thought provoking artworks by nine artists who address these issues with sensitivity in a wide variety of media; as well as an educational area developed by students from UGA’s Institute of Gerontology, led by Dr. Anne P. Glass. Overall the exhibition flips the stereotypical media focus on youth on its head.

During the passage of our lifetimes few of us are in the habit of considering what the last third may consist of: in large part a result of a societally sanctioned denial, accompanied by an absence of rituals that lead to paths of acceptance and celebration. This is unique to our era and particularly acute within western cultures, as many anthropologists have discovered. In keeping with exploring these notions, the exhibition was named after a TED talk by Jane Fonda titled The Third Act in which she explores these changes and places emphasis on aging as a period of potential, as a ladder towards spiritual reconciliation.

As Boomers age and the ‘crunch’ generation struggles, gerontologists are busy researching and proposing new ways of experiencing and handling the challenges that these additional three decades present. Similar to the rapid technological advances of the past three decades, without parallel advances at the same speed in fields such as psychology, sociology and theology, some fall-out and free-fall comes from such an enormous cultural shift. The symposium will address some of the specific ways and positive possibilities that are being developed.

All of the artworks and educational displays in the exhibit are designed to inspire discussion and contemplation of aging issues, albeit all in vastly different ways.

Professional Dallas photographer Tom Hussey’s meticulously crafted Reflections Series is richly poignant; his images encapsulate the span of an individual’s lifetime by capturing staged scenes in which individuals peer into mirrors—as if looking back in time—at their younger selves. Originating as a commission for a pharmaceutical campaign combatting Alzheimer’s disease, the series is all the more alluring for the variety of ethnicities and genders represented. It is also remarkable for the celebratory focus on the universal enjoyment of shared memories. The latter is key to a vital aspect of the third act of our lives, one increasingly understood as a time of coming to terms with the arc of one’s journey.

Athens’ painter Lisa Freeman’s works also compress the span of an individual’s lifetime into a single image. Yet in her case it is through the uncanny emotional impact of her expressionist style, such as Old Man Boy, her reworking of Diane Arbus’ famous 1962 photograph of a boy holding a toy hand grenade, which transforms an iconic anti-war statement into one on mortality.

Atlanta sculptor Ann Rowles experience caring for her ailing mother resulted in her Porosity Series, painstakingly crocheted body parts of surprising grace and beauty, such as a spine and a pelvis, which focus on areas of her mother’s body afflicted with ailments such as Osteoporosis. Such injuries are some of the most common among aging populations, impacting mobility, which too often results in seniors’ isolation. That the medium of crochet is portable, allowed the artist to carry her work with her to her mother’s doctor’s appointments and bedside, reflecting the impact of caregiving on her life, a role which more often falls to daughters of the ‘crunch generation.’

Artist Malena Bergmann, a faculty member of the Department of Art & Art History at the University of N.C. at Charlotte, has been reworking her impressive fourteen-foot long kinetic sculpture, Final Hour: Compline, on and off for over six years! The work was the impetus for the curator’s development of The Third Act exhibition. Final Hour: Compline was also inspired by time spent with an ailing relative, in this case the artist’s step mother, as well as by the mysterious arrival of an EKG strip tracing the last hour of a woman’s life, sent to the artist anonymously. A small spotlight focuses on the strip as it scrolls and unscrolls, from beating heart-to flatline, surrounded by wheelchair parts and jerking strings of medical tubing. It alludes to the incredible lengths the scientific and medical profession goes to in order to continue life at any cost. In the artist’s words “It becomes a metaphor for the human body’s struggle to survive while it is simultaneously and actively dying. It also speaks to an acceptance of death and concern for the qualities of that passage. Final Hour: Compline is part of a larger series of artworks called Gift and Baggage of Body, each of which is named after one of the prayers from the medieval Book of Hours, and all of which address mortality and our incessant progress towards our own final hour.” The sterility of the machinery and the medical apparatus comprising the piece also raises the issue of the growing trend toward home hospice care, with its emphasis on providing comfort during our last days, rather than pushing for the often fruitless and unpleasant efforts expended on attempts to prolong life, which was became the norm over the past half-century.

Similarly motivated by the passing of her mother, Decatur artist Cecelia Kane shares both a selection of drawings from her How Am I Feeling Today? self-portrait series and the photo documentation and plan drawings from her performance project, The Mother Hole, created during a residency that resulted in a meditation on her own attitudes towards her own aging. (She is familiar to Georgians from her Hand to Hand Project commemorating the Iraq War, which toured to ATHICA in 2010). The artist’s own words best describe The Mother Hole:

“In the summer of 2012, I dug a deep hole in Vermont at the site of a former marble quarry. I lined it in marble shards gathered there, and hand-fashioned a ladder from aspen that I harvested from the forest. The Mother Hole is an environmental "well" for examining my own mortality and the possibility of transformation in that process. Initially … (it) was to be a performative device for asking my deceased mother, Hazel, the nature of death. Digging a hole is a metaphor for plunging deep into the self, for birth as well as death, and the personal struggle that the mythologist Joseph Campbell called "the hero's journey." Each day for five weeks, I recorded my progress, blogged about my thoughts, encountered rocks and roots and obstacles to be overcome along the way. I always allowed for the possibility of failure or exhaustion. In the long process of digging down in the heat of summer, I discovered strength, moderation, and bravery. I no longer felt the need to ask Mom about the nature of death. I had instead created a deep place of my own for thinking, and abiding–a place that confirmed my power in old age.”

Karen Hymer, a photographer from Tucson, AZ, creates beauty out of that which mass media’s obsession with youth habitually rejects; the appearance of our skin in its aged form. Displayed are two photo gravures of the aging female body from her Skins Series, including a stunning large-scale quad archival pigment print created from iPhone captures, which measures over five-foot square. The close-ups of her Skins Series render the body as abstract landscapes, allowing Hymer to celebrate our journey towards mortality, rather than deny its existence. This is akin to the cultural practices of groups she has researched who have inspired her work. Cultures such as, in Hymer’s words, “the Cree in Canada and the Mayan in Guatemala [who] believe that when women enter menopause they can then become spiritual leaders in their communities.” She was also motivated by a desire to act against the unrelenting “focus on face lifts, tummy tucks, weight loss programs, [and] hair removal” she encountered after turning fifty.

On a similar but more humorous note, local conceptual artist, writer and activist John English, is creating an installation of faux anti-aging products for the exhibit, poking fun at culture’s continued efforts to forestall the inevitable and its deep denial of and lack of respect for the nature of life cycle.

English also happens to be featured in Athenian photographer David Noah’s masterfully composed shots of lively local elders. Two sets have been selected from his vast oeuvre—storytellers performing true stories from their lives during Silver Box: Living History, one of the Rabbit Box live series, which took place at the Melting Point in May 2013 (and will again in April 2014); and portraits of those who have read their original poems for the ongoing Word of Mouth series, such as Mark Bromberg, Bob Ambrose and Charlie Seagraves. Noah is well known for documenting local events in striking black and white, here his work aids in the appreciation of the ways that our own community benefits from our elders, from the insights that can only be had by those sharing wisdom and laughter derived from many years of experience and observation. Noah’s insightful portraits fully convey the joy and understanding their talents bring to their audiences.

On Dying is an astounding eight-minute video created by Peter Nelson from Northfield, MN. In the artist’s words it features “twenty-somethings lip-syncing the words of elderly people on the subject of aging and death…a number of family deaths spurred me to think about my own mortality, and how my views differ from my healthy, yet depressed, ninety-two year old grandmother. These disparate perspectives led me to interview elderly people on the topic of dying, and subsequently pair their words with young actors lip-syncing the dialogue. This presentation highlights generational incongruities, presenting the viewer with the perceptions of young and old people simultaneously.” The effect is both surreal and extremely affecting.

The exhibition is enhanced by collaborations with students from UGA’s Institute of Gerontology at the University of Georgia, under the direction of Dr. Anne P. Glass. They will contribute “Top 10 Trends Related to Aging in Georgia” as a poster and as handouts, as well as create an interactive chart on which attendees may graph the oldest person they know. In addition, Melissa Armstrong, a graduate student in social work and an Intern at the Institute of Gerontology has contributed factual research for wall texts, as well as organized a symposium on aging issues that will take place at ATHICA on February 23rd. Ms. Armstrong is also a table of information on area resources for seniors.

“It is our hope that the variety of approaches, materials and issues presented by The 3rd Act: Contemplating Aging will provide a stimulating and regenerative experience for viewers of all ages to contemplate the complex topic of aging.” said Zucker Saltz.