Report on the Construction of a Spaceship Module. On view in and around the spacecraft will be 117 artworks, including video, sculpture, print, and installation, by artists hailing from cities around Eastern Europe, all of whom tranzit has worked with previously. The exhibition space becomes an universe that dramatizes the cross-cultural translation involved in the presentation of art. 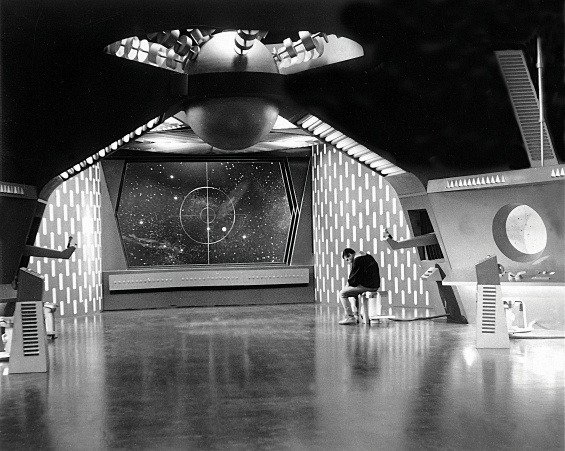 curated by tranzit and organized by Lauren Cornell

For their presentation “Museum as Hub: Report on the Construction of a Spaceship Module,” tranzit will transform the Fifth Floor gallery of the New Museum into the simulated interior of a spaceship. The spacecraft, specially designed for the exhibition “Report on the Construction of a Spaceship Module” at the New Museum, is a composite of shuttles featured in Eastern European science- fiction films from the Cold War period. In its structure and design, it recalls future fantasies from the socialist Eastern Europe side of the Iron Curtain and explores the ideological role outer space played during this time. On view in and around the spacecraft will be 117 artworks, including video, sculpture, print, and installation, by artists hailing from cities around Eastern Europe, notably Vienna, Prague, Budapest, Bucharest, and Bratislava, all of whom tranzit has worked with previously. The exhibition offers an allegory of “anthropological science fiction,” where the exhibition space becomes an estranged and exciting universe that dramatizes the cross-cultural translation involved in the presentation of art. The unique model evokes the challenges that contemporary artists experience in exhibiting works, or that curators come across in organizing exhibitions that stitch together diverse art, selected across generation, cultural context, personal narratives, and time.

The exhibition will be on view from January 22–April 6, 2014. The project is curated by tranzit and organized by Lauren Cornell, Curator, 2015 Triennial, Museum as Hub, and Digital Projects. In conjunction with the exhibition, the New Museum presents a publication including contributions by Lauren Cornell, tranzit, Miklós Erdéley, and Stano Filko, as well as an original science-fiction short story, extensive information on all participating artists, and a guide to the public programs. The publication will be free and available in the gallery and was edited by Taraneh Fazeli, Education Associate.
As an organization, tranzit consists of a network of autonomous but interconnected groups based in Austria, the Czech Republic, Hungary, Romania, and Slovakia. Much like the Museum as Hub (the New Museum’s international partnership initiative through which the exhibition is produced), tranzit organizations actively collaborate with each other to produce art historical research, exhibitions, and new commissions. The work included will form a loose and actively debated retrospective of their ten-year institutional history, providing a look at art from Eastern Europe through the lens of their organization. Fifth Floor Gallery at New Museum Transformed into Simulated Interior of a Spaceship with more than One Hundred Artworks on View as part of the Museum as Hub The installation will include works by sixty-five artists including Babi Badalov, Josef Dabernig, Miklós Erdély, Tamás Király, Eva Koťátková, Jiří Kovanda, Július Koller, KwieKulik, Denisa Lehocká, Lia Perjovschi, and Société Réaliste, among many others. About the ambitious three-month project, tranzit writes, “We hope for the exhibition to make the facts of time relativity, cultural translation, and spatial distance not only explained by curatorial conventions (texts, wall labels) but also performed by the visitors as they move inside the space and experience it as explorers, interested and disoriented by the new terrain they’re discovering.”

Public Programs
A conference, “Futures of Eastern Europe,” will take place the opening weekend, January 25 and 26.
The conference will include a series of critical discussions exploring the ideological role that outer space played in the Eastern Bloc during the Cold War, accompanied by a day-long science-fiction movie marathon. Another session will feature a series of lectures and debates by a young generation of curators and intellectuals, who will pose key questions related to art emerging from Central and Eastern Europe today. Participants include: Ivana Bago, Cosmin Costinas, Éva Forgács, Kate Fowle, Ana Janevski, Deimantas Narkevicius, Nataša Petrešin-Bachelez, Tomáš Pospiszyl, Jelena Vesić, and Anton Vidokle.
The spacecraft’s interior will also be used for conversations (via Skype) with participating artists, other curators, and critics—these discussions will be open to the public.

About Museum as Hub
Museum as Hub facilitates exchange and dialogue around international art and ideas. Founded in 2007, the initiative includes exhibitions on the Museum’s Fifth Floor, as well as residencies, commissions, public programming, and editorial and digital projects. Through support of contemporary art practices, the Museum as Hub aims to catalyze future exchange and collaboration around the world. Since its launch in 2007 by the New Museum, the Museum as Hub initiative has worked closely with a group of founding partner institutions to produce diverse programming at the New Museum and internationally. For more information on Museum as Hub and partners, visit newmuseum.org/museum-as-hub.

Support
The exhibition is made possible through a partnership with ERSTE Stiftung.
Artist travel is provided, in part, by the Trust for Mutual Understanding. Additional support for artist travel has been provided in part by Balassi Institute - Hungarian Cultural Center; the Ministry of Culture of the Czech Republic; and the Ministry of Culture of Lithuania.
Museum as Hub is made possible through the generous support of the Robert Sterling Clark Founda­ion. Artist residencies are made possible by the Ford Foundation. Support for Museum as Hub and public programs is provided, in part, by the New York City Department of Cultural Affairs and the New York State Council on the Arts. Additional support for artist residencies is made possible by Laurie Wolfert. Endowment support is provided by the Rockefeller Brothers Fund, the Skadden, Arps Education Programs Fund, and the William Randolph Hearst Endowed Fund for Education Programs at the New Museum. Education and public programs are made possible by a generous grant from Goldman Sachs Gives at the recommendation of David B. Heller & Hermine Riegerl Heller.