Three Decades of Photography and Video. The exhibition features more than 120 works - primarily photographs, but also texts, videos, and an audio recording by this socially motivated artist. Weems has long been acclaimed as one of the most eloquent and respected interpreters of African American experiences. 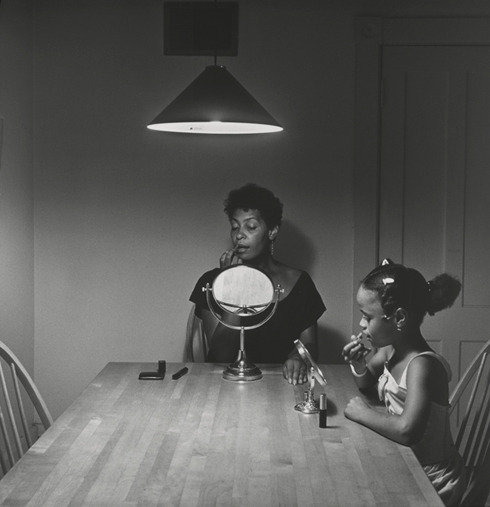 In January 2014, the Solomon R. Guggenheim Museum presents Carrie Mae Weems: Three Decades of Photography and Video, the first major New York museum retrospective devoted to this socially motivated artist. Weems has long been acclaimed as one of the most eloquent and respected interpreters of African American experiences, and she continues to be an important influence for many young artists today. Featuring more than 120 works—primarily photographs, but also texts, videos, and an audio recording—as well as a range of related educational programs, this comprehensive survey offers an opportunity to experience the full breadth of the artist’s oeuvre and gain new insight into her practice.

Carrie Mae Weems: Three Decades of Photography and Video is organized by the Frist Center for the Visual Arts, Nashville, Tennessee. The exhibition has been curated by Kathryn Delmez, the Frist Center, where it opened in September 2012. The Solomon R. Guggenheim Museum presentation is organized by Jennifer Blessing, Senior Curator, Photography, with Susan Thompson, Assistant Curator. This exhibition is supported in part by The Robert Mapplethorpe Foundation. The Leadership Committee for Carrie Mae Weems: Three Decades of Photography and Video is also gratefully acknowledged for its support, including Jo Carole and Ronald S. Lauder, Robert Menschel Vital Projects, and Jack Shainman Gallery, as well as Henry Buhl, Crystal R. McCrary and Raymond J. McGuire, Beth Rudin DeWoody, Rhona Hoffman Gallery, Toby Devan Lewis, Louise and Gerald W. Puschel, and Miyoung Lee and Neil Simpkins. Additional funding is provided by the William Talbott Hillman Foundation and the New York State Council on the Arts.

The work of Carrie Mae Weems (b. 1953, Portland, Oregon) invites contemplation of issues surrounding race, gender, and class inequality. Over the past thirty years, Weems has used her art to bring to light the ignored or erased experiences of marginalized people. Her work proposes a multidimensional picture of history and humanity, intended to spur greater cultural awareness and compassion. Although her subjects are often African American, Weems wants “people of color to stand for the human multitudes” and for her art to resonate with audiences of all backgrounds.

Organized in a loosely chronological order throughout two of the museum’s Annex Levels, the exhibition begins on Level 2 with the series Family Pictures and Stories (1978–84). This series, like many of Weems’s early works, explores matters relating to contemporary black identity, highlighting individuals in social contexts—including in this case her own kin. Her landmark Kitchen Table Series (1990) employs text and photography to explore the range of women’s roles within a community, pointedly situating the photographs’ subject within a domestic setting. Selections from Weems’s Sea Islands Series (1991–92), Africa (1993), and Slave Coast (1993) demonstrate her ongoing interest in language and storytelling. These works, made during the artist’s travels to the titular locales, pair images with evocative vernacular texts or etymological investigations that trace English words to African roots. The artist’s practice emphasizes the role of both spoken and written narrative, reflecting her graduate studies in folklore.

Weems often appropriates words and images, re-presenting them to viewers as biting reminders of the persistence of bigoted attitudes in the United States. Her renowned series From Here I Saw What Happened and I Cried (1995-96), presented on Annex Level 4, layers new text over found historical imagery to critique and lament prejudiced attitudes toward African Americans throughout the nineteenth and twentieth centuries. A yearning to investigate the underlying causes and effects of racism, slavery, and imperialism has spurred Weems to travel widely throughout the United States, Africa, Europe, and the Caribbean. During extended visits to these places, depicted in series such as Dreaming in Cuba (2002), The Louisiana Project (2003), and Roaming (2006), all represented in the exhibition, she looks to the surrounding land and architecture in order to foster communion with inhabitants past and present.

Video is a natural extension of Weems’s narrative photographic practice, also providing an opportunity for the artist to include music in her work. Although she worked in film during her undergraduate years at the California Institute of the Arts, Weems’s first major endeavor in the medium came in 2003–04 with Coming Up for Air, a work comprised of series of poetic vignettes that will be screened in the New Media Theater in the Guggenheim’s Sackler Center for Arts Education. Other video works, including Italian Dreams (2006), Afro Chic (2009), and Constructing History: A Requiem to Mark the Moment (2008) will be integrated into the exhibition near related photographs.

Education and Public Programs
A range of public programs will be presented in conjunction with Carrie Mae Weems, with details to be posted at guggenheim.org/publicprograms. Highlights include:

Carrie Mae Weems: Live from the Guggenheim
April 25, 26, 27
Carrie Mae Weems hosts an all-star cast of musicians, artists, activists, writers, and other celebrated guests in a series of museum sessions drawn from the inspirational context of Carrie Mae Weems: Three Decades of Photography and Video. This multidisciplinary performance salon will embody issues of identity, politics, narrative, and history that Weems engages in her work. Tickets and more information will soon be available on guggenheim.org/calendar

Exhibition Video
January 24 - May 14
Mon–Wed, Fri, Sun, 1 pm and 3 pm
Weem's Coming Up for Air (2003–04) features a series of unrelated yet linked vignettes that examine human relationships, including those between black men and white women in antebellum New Orleans, quarreling sisters hoping for reconciliation, a child and an adored father, and young idealistic lovers (suggestive of Winnie and Nelson Mandela) before a loss of innocence. The film will be screened in the New Media Theater in the museum’s Sackler Center for Arts Education. Free with museum admission.