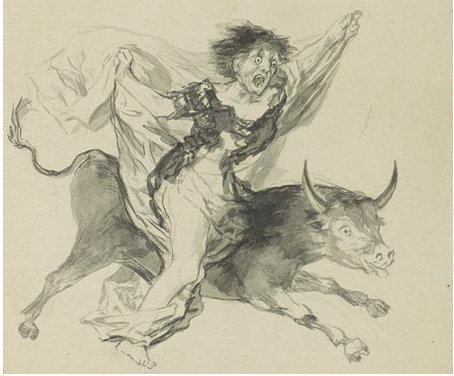 The exhibition explores the shifting roles and attitudes toward the art of drawing in Spain, as well as the impact of the Catholic Church and the nightmare of the Inquisition on Spanish artists and their work. It features more than twenty drawings spanning the sixteenth through the nineteenth centuries. Works by well-known artists such as Jose' de Ribera, Bartolome Esteban Murillo, and Francisco Goya are presented alongside sheets by equally talented but less familiar artists, including Vicente Carducho, Alonso Cano, and Eugenio Lucas. Complementing the drawings is a display of contemporary Spanish letters and volumes, notably a lavish 1780 edition of Cervantes' Don Quixote. (Image: Francisco Goya (1746-1828) Pesadilla (Nightmare), ca. 1816-20. Black ink and wash 10 3/8 x 6 3/4 inches. Gift of Mr. and Mrs. Richard J. Bernhard, 1959; 1959.13)