A Retrospective. Bing has been actively pursuing art from 1975 to today. This exhibition features 22 sets of works, including major art pieces from his early period to the present day, new works and large-scale site-specific installations. 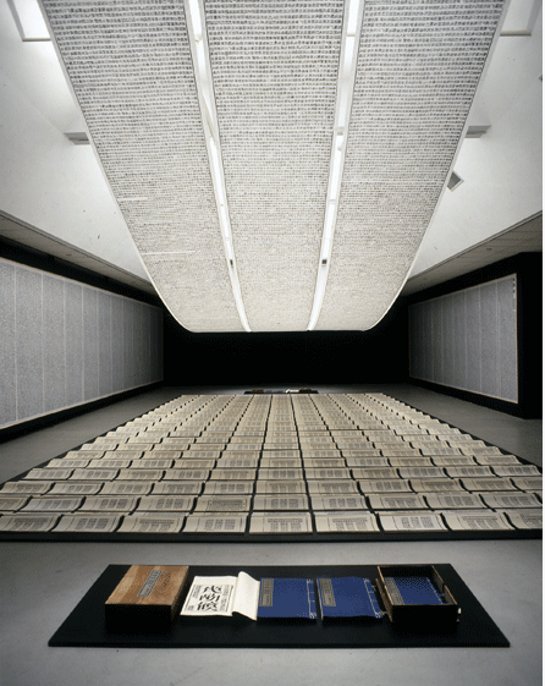 In January 2014 Taipei Fine Arts Museum presents Xu Bing: A Retrospective, Asia’s first large-scale solo exhibition of international contemporary artist Xu Bing, curated by senior curator and art critic Chia Chi Jason Wang. Xu Bing has been actively pursuing art for four decades, from 1975 to today. In 1991 he exhibited A Book from the Sky and Ghosts Pounding the Wall at the Elvehjem Museum of Art on the University of Wisconsin-Madison campus, a key event that laid the foundation for his artistic accomplishments and status. He infuses his contemporary art with Eastern philosophy and culture. His works engage in critical thinking about the written word and other tools of communication, the nature of art and civilization, and similarities and conflicts among different species and cultures. His works span such forms as print, paper, performance art and large-scale installations. From traditional wood carving to installation art, from incomprehensible block lettering to using animals as media, from his “Landscript” realistic landscape paintings to examinations of the textual language and symbolism of Chinese characters, his artworks possess great breadth, depth and diversity. Presented on the ground floor of Taipei Fine Arts Museum, this exhibition features including major art pieces from his early period to the present day, new works and large-scale site-specific installations.

A Curatorial introduction to Xu Bing: A Retrospective
When he was a child, Xu Bing recalls, his mother was so busy working at the Peking University Library Department that she would often "lock" him in the book storeroom. Perhaps this is why, when he later became an artist, the subjects of his works would always be closely bound to books.

In the 1950s the Chinese communists launched a campaign to reform the writing system, and the simplification of Chinese characters became a political movement. While he was growing up, Xu heard "new words constantly announced, and old words abolished. New words would be revised again and abolished, and old words would be reinstated." This special experience regarding the treatment of written language laid the seeds of a thought in Xu's mind: "Words are something you can play with."

During his years as both a student and a teacher of printmaking at the China Central Academy of Fine Arts, Xu not only viewed printmaking as a form of painting, but also got involved in traditional Chinese inscription rubbing and typography, exploring the possibility that printmaking could be a medium of avant-garde and contemporary art. The modular, procedural, multiplicitous nature of printmaking and its ability to transfer impressions became Xu's basic units of measurement for executing conceptual art. Three projects of the 1980s that Xu completed prior to embarking for the United States—Five Series of Repetitions, Book from the Sky, and Ghosts Pounding the Wall—were major representative works that laid the foundation for his rapid rise in the American art world in the 1990s.

After moving to the United States, the linguistically sensitive Xu Bing for a time questioned whether the Orient and the Occident could actually engage in language transference and achieve genuine communication. In the early 1990s he did several art projects revolving around the theme of Chinese-English translation, some even alluding to the absurdities of cultural exchange between China and the West. A, B, C..., My Book, A Case Study of Transference, Cultural Animal, and Telephone were all works from this period. But later in the 1990s, Xu transitioned from expressing communicative dissonance to creating interfaces for exchange. His Square Word Calligraphy was an intriguing convergence of Chinese calligraphy and English, as a part of which he not only designed a set of teaching methods, but also converted the exhibition space into a classroom. In 1999 the prestigious MacArthur Foundation gave Xu a "genius" fellowship in recognition of his "originality, creativity, self-direction, and capacity to contribute importantly to society, particularly in printmaking and calligraphy."

Since the late 1990s, Xu has been invited to take part in international exhibitions with increasing frequency, often creating works that respond to a specific curatorial theme or engage the site in a dialogue incorporating its unique cultural and historical features. Landscript, Tobacco Project, Background Story, Magic Carpet, Mustard Seed Garden Landscape Scroll, and The Character of Characters all developed from such site-specific encounters. Yet when conceptualizing his artworks, Xu never forgets to interact with the local context from the perspective of his own cultural background, stirring up new artistic momentum and discussion.

In the age of globalization of the 21st century, Xu also expresses personal feelings of universal concern for human society. Where Does the Dust Itself Collect? takes the events of September 11, 2001 as its springboard and reflects on the current state of world affairs through the lens of Buddhist wisdom. Book from the Ground is an enormous project, ongoing for a decade now, that muses on the new paths which contemporary—even future—human language is following, in what may be a knowingly futile attempt at a personal "Tower of Babel" project.

Xu Bing: A Retrospective brings together major representative works spanning 40 years, from 1975 to the present. It is his first large-scale international retrospective solo exhibition. Xu firmly believes that tradition must be reinvigorated if it is to be meaningful in the current age. He hopes that the Chinese cultural world will "use the Chinese way of thought, cultural orientation and worldview while absorbing from other admirable cultures in search of a new approach to culture." This spirit and vision is fully embodied in this exhibition.