The exhibition invites visitors on a journey through space and time, through cultures and art described in its diverse forms of expression. More than 40 modern and contemporary artists have been invited for this show. Alongside works by major artists such as Pierre Alechinsky, Yves Klein and Joan Miro'. 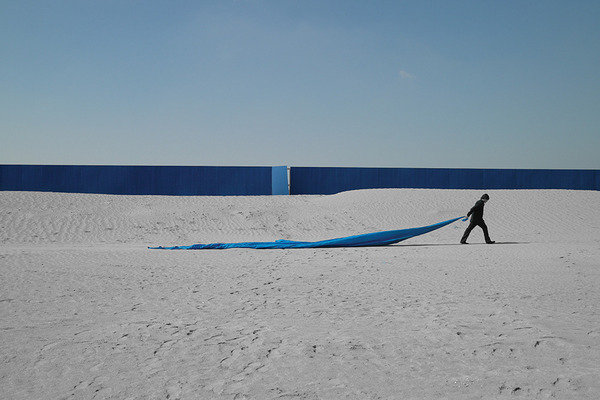 This exhibition follows the footsteps of the Silk Road through the colour blue, for centuries inspiring artists, craftsmen and poets, both in the East and West alike.
From the Mediterranean to China, this imaginary journey evokes the indigo of textiles, the blue ceramics of the Ottoman Empire and Central Asia, turquoise and lapis-lazuli jewels, culminating with the famous China blue.
The exhibition invites visitors on a journey through space and time, through cultures and art described in its diverse forms of expression. More than forty modern and contemporary artists have been invited for this exhibition, which will subsequently be shown to the public in the Museum of Limoges.
While blue was regarded as a "barbaric" colour in Greek and Roman Antiquity, the East already used it in art as well as in everyday life, be it for religious rituals, dyeing textiles, decorating ceramics and glass, or the ornamentation of precious jewellery.
Known as anil, indigo gave its name to the Nile, the "blue river" of Egypt, where the colour was thought to bring good fortune in the afterlife. Turquoise was dedicated to Hathor, goddess of motherhood, and the god Horus' pectoral is of a deep blue, symbolizing the healing eye as well as the sun.
In Persia, it was thought that the world rested on a sapphire giving the sky its radiance, while in ancient China blue was attributed the medicinal properties of the indigo plant and was used in the manufacture of paper, clothes and porcelain. The Tibetans, for their part, treasured turquoises as a charm protecting water and springs.

If the East has long regarded blue as endowed with certain virtues, curiously it was not until the 12th century that Europe gradually appreciated the colour, which hitherto had only been described in a poor language. But since more modern times, Blue has found its rightful place in the West, to the point of becoming, ahead of red and green the world's favourite colour, symbolizing dreams, wisdom and serenity. Henceforth, blue is ubiquitous: associated with the purity of water, the infinity of the heavens and seas, divine and royal right, work clothes and jeans of all generations, the works of Impressionist and Fauve artists to those of Matisse and Yves Klein. Blue is colour adorned with many attributes and there are countless expressions that give meaning to its thousands of shades.

Alongside works by major artists such as Pierre Alechinsky, Yves Klein and Joan Miró

In collaboration with:
The Cité de la Céramique, Sèvres and Limoges, the Musée national des Arts asiatiques Guimet (Paris), the Museum of Ixelles (Brussels) and the Grand Curtius Museum (Liège)

Some contributors have asked to remain anonymous.

A catalogue richly illustrated is being published for the exhibition.
International meetings will be organised at the Villa Empain on the 3rd, 4th and 5th December 2013 that will give an in-depth insight in the exhibition, entitled Périples de la Route bleue.

Villa Empain Boghossian Foundation
Avenue Franklin Roosevelt 67 - 1050 Bruxelles
The exhibition is open every day except Monday, from 10 am to 6.30 pm. It is closed on December 25th and January 1st.