Rebekkah, the artist's new work, is inspired by a 16-year-old girl from Hackney, who was one of the protagonists of the 2011 London Riots. She was asked to travel to China to take part in a unique social experiment, where her access to social media was restricted and she visited factories manufacturing the objects she aspired to own and took for granted. 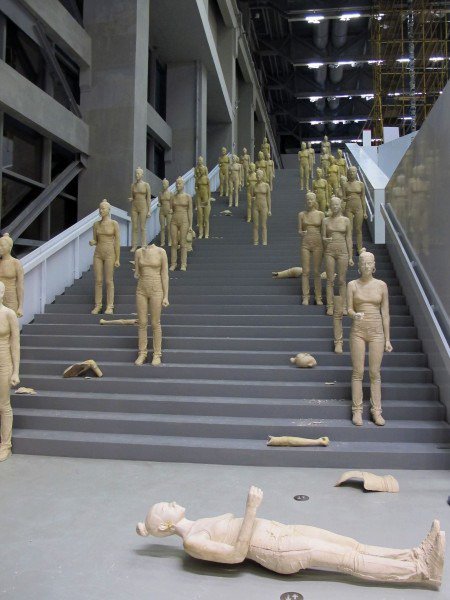 Rebekkah is inspired by a 16-year-old girl from Hackney, who was one of the protagonists of the 2011 London Riots. Rebekkah was asked by Fujiwara to travel to China to take part in a unique social experiment, where her access to social media was restricted and she visited factories manufacturing the objects she aspired to own and took for granted (fashion clothing, mobile phones, flat-screen TVs). The trip culminated with a viewing of the Terracotta Army, after which Rebekkah was taken to a factory where casts were made of her body to be assembled into modern-day versions of the warriors. Up to 100 figures were created in this assembly line technique, shifting Rebekkah to a new position: a representative of a new breed of British-born warrior and a soldier for social change. An edition of the work will be on display at the Contemporary Art Society, with an accompanying video.

Established in 2012, the Contemporary Art Society Collections Committee selects and buys works by early and mid-career artists to gift to regional museums across the UK and is a vital part of our philanthropic work. The committee is chaired by Trustee, Cathy Wills. Leeds Art Gallery was selected to receive Rebekkah due to the museum's extensive and important sculpture collection. The work feeds into existing narratives within the collections at Leeds and helps to chart the development of life-size figure sculpture and portrait sculpture from the 19th century.

About Contemporary Art Society
The Contemporary Art Society is a national charity that encourages an appreciation and understanding of contemporary art in the UK. With the help of our members and supporters, we raise funds to purchase works by new artists, which we give to museums and public galleries, where they are enjoyed by a national audience; we broker significant and rare works of art by important artists of the twentieth century for public collections through our networks of patrons and private collectors; we establish relationships to commission artworks and promote contemporary art in public spaces; and we devise programmes of displays, artist talks and educational events. Since 1910 we have donated over 8,000 works to museums and public galleries—from Bacon, Freud, Hepworth and Moore in their day through to the influential artists of our own times—championing new talent, supporting curators, and encouraging philanthropy and collecting in the UK.

About Simon Fujiwara
Simon Fujiwara (born 1982, London) lives and works in Berlin. He studied Architecture at Cambridge University (2002–05), and Fine Art at the Städelschule Hochschule fur Bildende Kunst in Frankfurt am Main (2006–08). In January 2012, Tate St Ives hosted his first major solo survey exhibition, Since 1982, which was held in his hometown of St Ives and featured six of his key autobiographically charged installations. He has participated in many biennials including the Venice Biennale, 2009; Manifesta 8 and São Paulo Biennial in 2010; Singapore Biennial, Manchester International Festival, and Performa, New York, all 2011. His installations are in museums and foundation collections including the Hamburger Kunsthalle, Hamburg, Prada Foundation, Milan and the Tate collection, London. His work has been presented at galleries including the CCA Wattis Institute for Contemporary Art, San Francisco; The Power Plant Contemporary Art Gallery, Toronto; MUSAC, Léon; and MOT, Tokyo. He was the winner of the Cartier Award at Frieze Art Fair and the Baloise Art Prize at Art Basel, both in 2010.