Maaike Schoorel makes what might be called "slow paintings"works composed of subtle gestures and evocative strokes; Michiel Ceulers pushes boundaries of painting tradition with his experimental approach to abstractions. 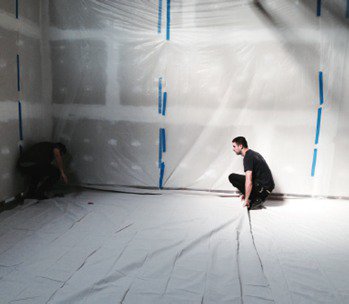 Contrasting with the culture of high-definition images and instantaneous access, artist Maaike Schoorel makes what might be called ‘slow paintings’, works composed of subtle gestures and evocative strokes that reveal themselves and their subjects over time as the eye adjusts. A painter of international renown, Schoorel’s expert handling of colour and nuance gives her a surprising knack for evoking psychological reactions from viewers.

Emerging Belgian artist Michiel Ceulers pushes boundaries of painting tradition with his experimental approach to abstractions, from tactile grids to shaped canvases, collages and shimmering plains of green paint. Ceulers’ process incorporates both predetermined and random marks and gestures, as well as such mistreatments as sanding, puncturing and tearing.

Working with such source material as live models and photographs of friends, family, lovers and herself, often cropped to evoke certain details and compositions, Schoorel commences her works with a figurative framework in mind. This is then broken down into subtle, individual strokes and gestures that are layered and built up upon either wholly white, off-white or black backgrounds to capture the essence of her subject, bleached out and ridden of visual noise with considerable skill and beauty. At first the works might appear to be totally abstract, but rest a little with them and soon elbows, faces, penises, breasts and eventually entire bodies reveal themselves with candour. Schoorel also works with still-lives and monumental old master compositions that allude to the history of her chosen medium.

Full of metaphor and allusions to memory, Schoorel’s paintings succeed in forging new ground with a singular style and practice that nonetheless nods to those rich movements of the past. She effectively reconfigures painting as a participatory experience, intensifying the process of looking and reminding us that seeing is as much about what cannot be seen as what can.

Ceulers is intensely aware of painting’s long history and seeks to strip his works of the baggage that comes with it. Discussing his grid paintings he has said: “I am interested in the possibilities of abstract painting because it is politically dead. It failed, it’s like the idea of Malevich going from the peasants to the black square then going back again. So there is not really much to say, but because of that there is a possibility to explore that and then you really move towards that idea of modernism being what it is and there is nothing more, and you are already at that point of 0 degrees, which I think is really interesting to work with."

What his works share with other great paintings from history is a vital energy and a luscious materiality. Colour is used effectively; sometimes sparingly behind rough grids of white, and at other times almost in overdose as with his It’s not easy being Green series that takes inspiration from Kermit the Frog. Playing with meaning and interpretation, Ceulers often uses long-phrased titles – philosophical statements, song lyrics, movie quotes or bon mots – to further generate associations for the viewer. These include I’ve Got A Vision of Nature Implanted in my Brain / Rose is a rose is a rose is a rose, or My name is not a game (Old school), or, for a disjointed diptych, A Little Less Conversation – and one gets the sense that the artist is teasing the very nature of abstraction, while also sincerely investing his talents in its progression.