Wexner Center for the Arts

Wexner Center for the Arts, Columbus

Via Brasil presentations began unfolding across all the Wex's program areas in 2012, and will culminate in through 2014 with a major exhibition and documentary film series, a translation of film criticism, and complementary performing arts events. 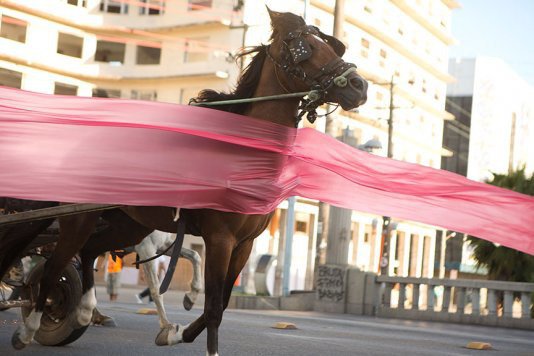 Via Brasil presentations began unfolding across all the Wex's program areas in 2012, and will culminate in through 2014 with a major exhibition and documentary film series, a translation of film criticism, and complementary performing arts events. With Via Brasil, the Wexner Center strives to introduce our community to the unique and diverse cultural landscape that contributes to the increasing prominence of Brazil on the global arts scene.

Get ready to immerse yourself in Cruzamentos: Contemporary Art in Brazil, encompassing all of our galleries (and then some) this February. The Portuguese word cruzamentos translates literally as “crossroads” or ‘”intersections,” but in Brazil it’s also a metaphor for the diverse cultural heritage that makes the country so distinct. In that spirit, this exhibition explores the work of almost 40 dynamic Brazilian artists—many of whom have never been widely exhibited in the US—whose practices and influences are as varied as the social, racial, and geographical composition of the country itself. The exhibition will include new and site-specific works, several of which you’ll encounter in unexpected places in and around the center.

Although a handful of postwar Brazilian artists have received recognition in North America (including Hélio Oiticica and Ernesto Neto, whose work has been exhibited at the Wex), the astonishingly high level of artistic production throughout Brazil over recent decades remains significantly overlooked beyond its borders. Between the 2014 World Cup and 2016 Olympics, all eyes will be trained on this rapidly evolving country and its political and economic development. Cruzamentos offers a timely focus on Brazil’s vibrant culture and is one culmination of the Wexner Center’s multidisciplinary, four-year-long Via Brasil initiative.

Via Brasil made possible by The Andrew W. Mellon Foundation.

stampa
permanent link
Wexner Center for the Arts
IN ARCHIVIO [14]