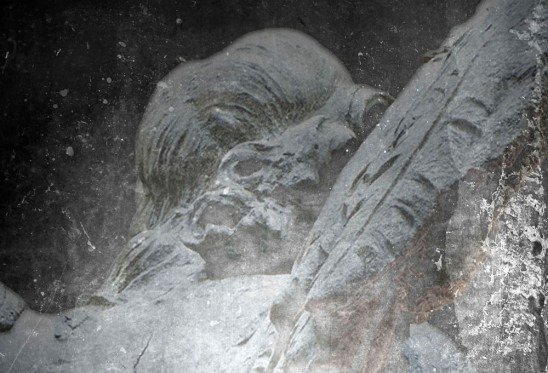 The American Academy in Rome is pleased to present the 2014 edition of CINQUE MOSTRE, five distinct exhibitions in various locations in the McKim, Mead & White building grouped under the overall title TIME AND AGAIN. The exhibitions, conceived and organized by current Rome Prize fellows and Italian critic Christian Caliandro, feature a wide variety of works in different media by American and Italian artists interrogating the ways in which contemporary art reimagines the past, celebrates new beginnings, evokes a lived experience of history, and calls into question entrenched systems of knowledge and conventional chronologies. With initiatives such as this one, the American Academy in Rome demonstrates its continuing support of innovative artists, writers, and scholars living and working together in a dynamic international community characterized by interdisciplinary dialogue.

Nanni Balestrini, Anna Gimon Betbeze, Hamlett Dobbins, Tony Fiorentino, Dan Hurlin, Catie Newell, Reynold Reynolds, Giuseppe Stampone, Marco Strappato, Thomas Kelley, Catherine Wagner
The artists gathered together in Concrete Ghost / Fantasma Concreto condense, in various ways, the diffuse sensation of suspension permeating the present moment. The idea is adapted from a text by Giorgio Vasta, Italian Affiliated Fellow in Literature at the American Academy in Rome. It is at once a very specific condition and, at the same time, an elusive and evanescent one. It is that of a ghost possessed of a body, senses, sensuality, and a brain that comprehends. The embodied ghost is the precise opposite of a vanishing body: it is rather immateriality assuming concrete physical form. The concrete ghost entails movement, tension, an oriented mechanism, an atmosphere of perfectly controlled and dominated obscurity.

From ruins to relics in churches and embalmed bodies in catacombs, memento mori are everywhere in Rome, a city whose earthly delights are indelibly associated with La Dolce Vita. Rome is suffused with both hedonism and melancholia; the pleasures of life are ineluctably entwined with the sadness of the inevitability of death. A contemporary meditation upon the Rome’s dual identity, Dance macabre revisits Andy Warhol’s “Dance diagrams,” adding skeletal partners who haunt the dancers’ steps outlined on the floor.

Found Realities is a study collection of unreal domestic objects and behaviors that expose, project, and speculate on a fantastical material culture and the evidence of a fictionalized, unreliable researcher. The work is composed of a series of bizarre objects, drawn depictions of their expected use and nonsensical setting, and elaborate narrative field notes that expose these assumed truths. Everything, at first glance, appears ‘off’ and abnormal to our current tendencies, suspended between familiar associations and a documentation set that feels both thorough and unreal. Staged within an occupied archeological workshop, the uncanny objects, elaborate drawings and passionate field notes take cues from objects, documents, and notational systems from prior archaeological research sites placing Found Realities in a delicate balance between the unbelievable and assumed truths.

History Recast offers a close examination of the relationship between photography and Roman sculpture in contemporary art. Revisiting the claim made by French critic André Malraux in 1947 that the history of art—in particular sculpture—had become “the history of that which can be photographed,” this exhibition explores how artists today no longer use the camera simply to document sculpture. Instead, they embrace photography to create new visions of iconic objects that call into question how we view our heritage, our systems of knowledge, and ourselves. The exhibition focuses on photographs of objects located in and around Rome, the city’s museums, or collections abroad, casting new light on the Eternal City as a laboratory in which to excavate the past, as well as our lived experience of history.

Inspired by newly inaugurated Pope Francis’s affinity for light as a metaphor for change, LUMEN abstracts and re-contextualizes an act of spiritual contemplation. In keeping with a secular regard for the Pope’s palpable sense of hope, LUMEN, an interdisciplinary and multi-sensory experience synthesizing various art forms, reshapes contemporary spirituality by reconsidering the pew, a site for conventional prayer. Audiovisual elements and thyme plantings create an immersive, scented environment removing the pew from its archetypal context. The physical relic, or conventional object of devotion, is replaced with a video projection of light and a musical composition responding to the movement of the video. While the pew remains iconic in scale and orientation, it no longer demands the observer to acknowledge any singular beliefs, but rather encourages a new and open contemplative experience.

American Academy in Rome
via Angelo Masina 5 00153, Roma
Hours: open on Fridays, Saturdays and Sundays from 4pm to 7pm